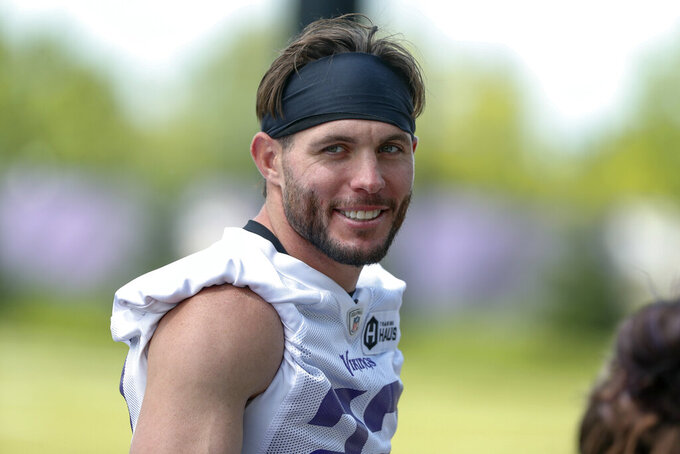 FILE - Minnesota Vikings safety Harrison Smith takes part in drills at the NFL football team's practice facility in Eagan, Minn., on June 8, 2022. Smith begins his 11th NFL season, all with the Vikings. The six-time Pro Bowl safety is a new father, too, with plenty to be happy about as the Vikings start camp under a new coaching staff. (AP Photo/Bruce Kluckhohn, File)

EAGAN, Minn. (AP) — Harrison Smith caught himself recently, like a play-action fake that got him going the wrong way, when an acquaintance asked him his age.

The longest-tenured player on the Minnesota Vikings and one of the oldest safeties in the NFL turned 33 earlier this year, but the six-time Pro Bowl pick clearly does not feel that old.

“I started saying 20-something,” Smith said. “You just forget. It just flies by. I still feel good, but every old guy says that. You’ve just got to see how I look, I guess.”

When the Vikings line up for their first full-team drills of training camp on Wednesday, Smith will start his 11th season next to rookie Lewis Cine.

Cine is the latest partner the Vikings have presented Smith in the back of the defense, and the first-round draft pick from Georgia has the potential to be the greatest of the group. From Jamarca Sanford (2012-13) to Robert Blanton (2014) to Andrew Sendejo (2015-17) to Anthony Harris (2018-20) to Xavier Woods last year, Smith has a track record of helping elevate the players at the opposite safety spot. None of them came with a skill set like Cine's.

“I’ve worked with enough guys, a lot of different personalities, body types, game styles,” Smith said Tuesday after veterans reported to Vikings headquarters. "He’s got a good head on his shoulders. He’s smart. He’s got a bunch of tools, plus we got a bunch of other guys in there who know what they’re doing. So we’ll figure it out.”

Smith has played in 145 regular season games, the most by any safety in the league who is currently on a roster. Devin McCourty (New England) and Kareem Jackson (Denver) are the only active players at the position who were born before Smith, who will be 34 on Feb. 2.

If Smith appears in every game, as he’s done five times in 10 years, he would move into 15th place all-time for games played by a safety, according to Sportradar data. The only defensive players who’ve played in more games since he entered the NFL are Cameron Jordan (160), McCourty (158), Fletcher Cox (156), Bobby Wagner (151), Cameron Heyward (150) and Lavonte David (149).

“The general rules of football have changed in a lot of ways, depending on how far you want to go back in my playing career,” said Smith, whose wife, Madison, gave birth in May to their first child, daughter Eleanor. “I was tackling a lot different when I was 10 years old than how I try to tackle now. Pretty much every tackle I made in high school was a horse-collar tackle, so that’s out. You've just got to be cognizant of trying to fit into the game as it is now.”

Which means tracking the ball in a safer, smarter way.

“As a rookie I was a little more hard-headed. I always wanted to go for big hits. If you can still get big hits, that’s great, but you have to try to do it in the rules of the game,” said Smith, whose annual average contract value of $16 million is the third-highest among NFL safeties. “Secure tackles are important. It’s not always about some highlight hit.”

Selected in the first round out of Notre Dame in 2012, Smith has made more Pro Bowls than every player in his draft class except three: Russell Wilson (nine), Bobby Wagner (eight) and Luke Kuechly, who retired with seven. Smith and wide receiver Adam Thielen, who joined Minnesota's practice squad in 2013, are the only players who were with the Vikings before Mike Zimmer was hired as head coach in 2014.

Zimmer was replaced by Kevin O'Connell this season, and with the staff change came a new system under defensive coordinator Ed Donatell. The learning process — and seeing strategy through a new set of eyes — has been nothing but invigorating for Smith.

“That stuff has always intrigued me,” Smith said. "Once you’re out there, as long as you know what you’re doing to some degree, you can still let it loose, go have fun and play football.”