With Watson on board, Browns bracing for more boos on road 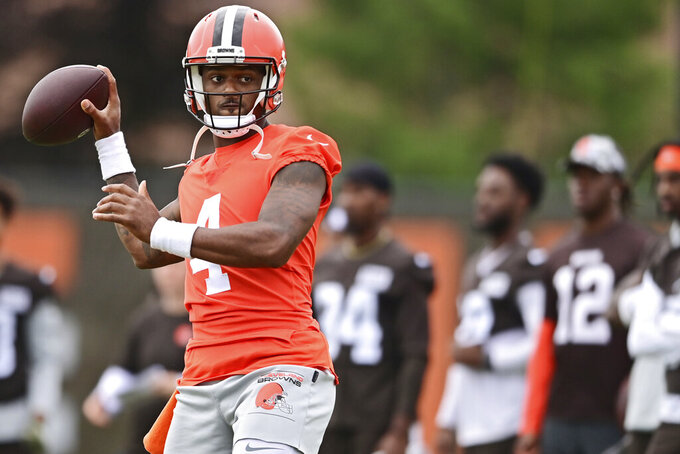 BEREA, Ohio (AP) — The booing has begun, and it's only the preseason. The Cleveland Browns expect it to increase and intensify over the months ahead.

Deshaun Watson is a target, and so are his teammates.

As they prepare for Watson to be suspended by the NFL for violating its personal conduct policy, the Browns know they're probably going to be subjected to rougher and rowdier treatment from fans during road games this season.

Watson has made them appear villainous.

"It seems like more than ever, ‘Cleveland against the world,’” All-Pro guard Joel Bitonio said Sunday, repeating a popular phrase adopted in a city that has long felt like an underdog. “So we’ll be ready for it.”

Watson was booed throughout his exhibition debut on Friday night in Jacksonville. There were some in the crowd at TIAA Bank Stadium who directed profane chants at the controversial quarterback accused of sexual misconduct by two dozen women during massage therapy appointments in Texas.

The three-time Pro Bowler for Houston is facing a possible year-long ban and significant fine from the league, which appealed a six-game suspension handed down by independent arbitrator Sue L. Robinson.

Watson's playing status rests with Peter C. Harvey, appointed by Commissioner Roger Goodell to handle the appeal. Harvey's decision could come any time or there could be a settlement between the NFL and NFL Players Association.

Watson, who hasn't spoken to reporters since June 14, apologized for the first time before Friday's game in an interview with the team's preseason TV crew.

Bitonio was one of several starters who didn't play against the Jaguars. But while he watched from the sideline, Bitonio, who has seen plenty in his eight seasons with Cleveland, heard the noise.

It was a preview of how this season will be.

Watson showed some rust and maybe jitters in his first game in nearly 600 days — he sat out last season — by completing just 1 of 5 passes for 7 yards in three series. The shaky performance prompted questions about whether Watson was rattled by his unresolved situation and uncertain future.

“I haven’t talked to him about that,” Bitonio said. “I’m sure not playing football in however long it’s been is probably a bigger concern. But the crowd was loud for a preseason game in Jacksonville. They got pretty loud down there.”

The stadium was only half-full, so imagine what it will be like in Baltimore, Pittsburgh and Cincinnati, Cleveland's AFC North stops where the Browns were already the enemy before they traded for Watson under center.

“I’m sure every stadium we go, we’ll be booed,” Bitonio said. “I don’t know if it will get worse. I think people get tired of booing, you know? But I’m sure every time he goes out there, there’ll be some sort of boo to start the game and we’ll kind of go from there.”

Browns coach Kevin Stefanski doesn't have any plans to address what his team could be facing down the road — and on the road.

“It’s our job to focus on the things that are important in those game settings," he said. "We'd be doing ourselves a disservice if we focused on anything that people were saying about us before the game, during the game, after the game, those type of things.”

For the first time in camp on Sunday, Jacoby Brissett, who will start during Watson's suspension, took the majority of snaps with Cleveland's first-team offense. Brissett didn't play against the Jaguars and Stefanski said he'll also sit out Sunday's home game against the Philadelphia Eagles.

Stefanski said he didn't know if it would be difficult for Watson to adjust to getting less work with the starters.

“Obviously, we know he is going to be unavailable starting Week 1,” Stefanski said. "This has been our plan. I think he understands what we are doing. He's on board.”

NOTES: Bitonio finds it interesting that former Browns C JC Tretter remains a free agent despite his excellent track record. The Browns may consider re-signing Tretter after C Nick Harris suffered a knee injury Friday that will likely cost him the season. “His resume speaks for itself, the time he put in with the Browns,” said Bitonio, who wonders if Tretter's work as NFLPA president is hurting him. “Maybe some of the owners don’t appreciate what he brings to the table on certain topics where he’s trying to protect player safety and things of that nature,” Bitonio said. “It seems a little suspicious to me.” ... All-Pro DE Myles Garrett was excused from practice to deal with a personal matter.