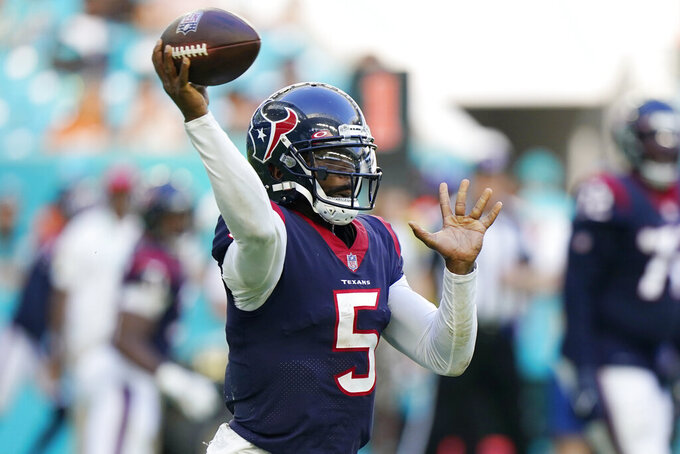 Houston Texans quarterback Tyrod Taylor (5) aims a pass during the second half of an NFL football game against the Miami Dolphins, Sunday, Nov. 7, 2021, in Miami Gardens, Fla. The Dolphins defeated the Texans 17-9. (AP Photo/Wilfredo Lee)

BETTING LINE: Titans by 10, according to FanDuel SportsBook.

TURNOVER DIFFERENTIAL: Texans minus-3; Titans plus-2.

TEXANS PLAYER TO WATCH: QB Tyrod Taylor looks to bounce back after one of the worst performances of his career in his last start before the bye. Taylor tied a career high with three interceptions in a loss to Miami in his return from a six-game absence with a hamstring injury. Coach David Culley says one of the veteran’s strengths is that he doesn’t make the same mistake twice.

KEY MATCHUP: The Titans have been trying to find a rhythm with D'Onta Foreman and Adrian Peterson replacing Derrick Henry in the run game. The Texans are giving up an average of 136.9 yards per game on the ground.

KEY INJURIES: Texans LT Laremy Tunsil, who had thumb surgery on Oct. 14, is still recovering and did not return to practice this week. Texans C Justin McCray remains out with an ankle injury. Titans RG Nate Davis and RB Jeremy McNichols both are dealing with concussions. OLB Bud Dupree did not practice Wednesday after leaving last week's game early with an abdominal injury.

SERIES NOTES: The Titans not only lead the series against the team that replaced the former Oilers in Houston, they have won three straight and five of the last seven. ... The Titans also are 14-7 inside the AFC South since Mike Vrabel was hired as head coach in 2018. Tennessee hired Vrabel away from the Texans where he was defensive coordinator.

STATS AND STUFF: Houston’s eight-game skid is its longest since dropping the final 14 games of the 2013 season. The Titans are off to their best start since opening the 2008 season 10-0. Their six-game winning streak is the NFL's longest active, with the last five against 2020 playoff teams. The Titans are tied with Arizona and Green Bay for the NFL's best record. ... The Texans forced a season-high five turnovers against the Dolphins. ... Houston tied a season high with four sacks against Miami. ... Texans WR Brandin Cooks has 19 receptions on third downs, tied for fourth in the NFL. Cooks had 166 yards receiving and two touchdowns in his last game against the Titans. ... WR Danny Amendola had a season-high 49 yards receiving against the Dolphins. ... LB Zach Cunningham had 13 tackles, including one for a loss, and a forced fumble in the last game against Tennessee. ... DB Eric Murray had eight tackles and an interception in the last game. ... Titans QB Ryan Tannehill has 13 TD passes, three TDs rushing and only two interceptions in his past five starts vs. Houston. ... Foreman had a season-high 78 yards from scrimmage last week. He was selected by Houston in the third round of the 2017 NFL draft. ... OLB Harold Landry is third in the NFL with a career-high 10 sacks. ... Titans DT Jeffery Simmons has a career-high 7 1/2 sacks with five in the past two games. ... S Kevin Byard has five interceptions this season.

FANTASY TIP: Titans WR A.J. Brown. He had 10 catches for 151 yards and a TD in the last game in this series. Brown caught only one pass for 16 yards last week and usually bounces back strong after such a performance.