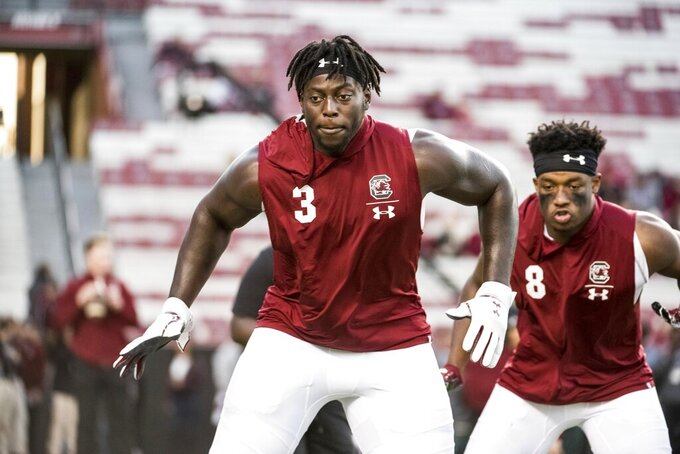 The San Francisco 49ers made a pair of trades in the NFL draft Thursday night, moving down one spot to take defensive tackle Javon Kinlaw at No. 14 and then up six spots to take receiver Brandon Aiyuk 25th.

The Niners dealt the 13th pick they acquired from Indianapolis for Buckner along with a seventh-rounder to Tampa Bay for the 14th pick and a fourth-round selection.

They then drafted Buckner's replacement in Kinlaw and then packaged the fourth-rounder along with one of their fifth-round picks to move up from No. 31 and get Minnesota's second-round pick.

They then selected the versatile Aiyuk, who can play in the slot or outside and also has had success as a returner.

Buckner was set to be a free agent next season and he got an $84 million, four-year extension from the Colts to stay off the market. San Francisco used the money it saved to keep defensive lineman Arik Armstead and safety Jimmie Ward and now has a defensive tackle as well.

This pick follows a pattern for the 49ers, who took a defensive lineman in the first round for the fifth time in the last six drafts. Some of those players, like 2019 No. 2 pick Nick Bosa, Buckner and Armstead, played a big role in San Francisco’s success last season that led to a Super Bowl appearance.

Coach Kyle Shanahan and general manager John Lynch once again opted to build out from the trenches by taking South Carolina's Kinlaw, who is a physical mismatch at 6-foot-6, 310 pounds with athleticism that can overwhelm interior linemen.

Kinlaw is viewed as the best interior pass rushing prospect even though he only had 11 1/2 sacks his final two years at South Carolina. But he had 39 QB pressures this season, according to SportsInfo Solutions, despite playing out of position at nose tackle for more than one-third of his snaps.

With D.J. Jones expected to handle that role in San Francisco, Kinlaw will be free to get into the backfield more, rather than tie up blockers, and should thrive.

Aiyuk had a breakthrough season in 2019 for Arizona State with 65 catches for 1,192 yards and eight TDs. He had only 33 catches for 474 yards in his first season with the Sun Devils after playing in junior college as 2019 New England first-rounder N’Keal Harry was the focal point of the passing game.