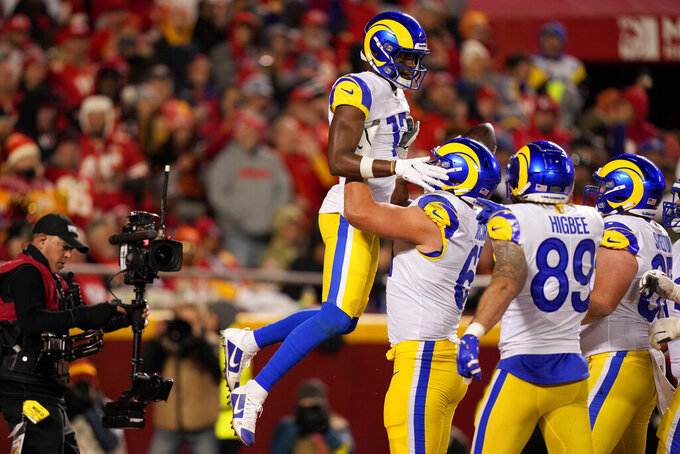 LOS ANGELES (AP) — Even Aaron Donald is not immune to the injury bug that has consumed the Los Angeles Rams' season.

Donald may be forced to miss a game due to injury for the first time in his nine-year NFL career, potentially adding him to the crushing list of injured Rams including Matthew Stafford, receivers Cooper Kupp and Allen Robinson, defensive tackle A'Shawn Robinson and most of the offensive line.

“He's still meeting with the doctors and getting the necessary scans,” McVay said of Donald. “On Wednesday, when we reconvene, I'll have a little bit more information.”

Donald has played in 86 consecutive games, including 10 playoff contests, for the Rams since 2017. He has missed only two games in his nine-year career, sitting out the Rams' 2017 season opener right after his contract holdout ended and then sitting out the regular season finale to rest for the playoffs.

Donald even played through torn rib cartilage in the playoffs two seasons ago, but the Rams don't appear to be getting anywhere near the postseason this year. Their 26-10 loss at Kansas City on Sunday was their fifth straight, matching the 1987 New York Giants for the worst 11-game start to the following season by a Super Bowl champion.

“We are trying to compete to get the results that we want, but man, it certainly has been something that I don’t think anybody could have ever predicted,” McVay said. “I mean, when it rains, it pours.”

After managing just 198 yards in Kansas City, the Rams' offense has dropped to 31st in the NFL with 279.8 yards per game, less than a full yard ahead of last-place Houston for the league's least productive unit. Third-string quarterback Bryce Perkins passed for 100 yards and ran for 44 in his NFL debut, but the Rams scored only three points on their first five full drives before Perkins threw two interceptions in the fourth quarter.

McVay said he doesn't know whether Perkins or second-stringer John Wolford will play Sunday against Seattle, indicating he might use both quarterbacks.

Stafford hasn't been officially shut down for the season yet, and neither has Kupp nor Donald. McVay claimed the Rams aren't ready to make the decision to preserve their top talents for 2023 until they know more about what's possible in the final six weeks.

“I think you've got to take each individual question,” McVay said. “I understand the question, but there's a lot of stuff that goes into these games, and as a competitor ... you want to be mindful of all the things that go into that, while also being smart.”

The defense put in an outstanding effort against the powerhouse Chiefs, holding them to only 26 points and limiting Kansas City to one touchdown and four field goals in six red-zone trips by an offense that had scored TDs on more than 72% of its red-zone trips entering the game. The Chiefs ran 17 red-zone plays in the fourth quarter and didn't score a TD.

The injury-plagued offensive line needs help that's no longer available. Rookie seventh-round pick A.J. Arcuri made his NFL debut as the Rams' fourth starting left tackle of the season, and he was frequently overwhelmed by the Chiefs' rush. Veteran in-season signee Matt Skura also didn't excel at left guard. The Rams can't function without a functioning line, but McVay said there's a chance center Brian Allen could return from his thumb injury this week.

The inept rushing game is showing signs of improvement over the past two weeks, although Perkins gave it the biggest boost with his legs, adding a dimension the Rams didn't have earlier this season. Rookie Kyren Williams led the Rams with 11 carries in Kansas City, but managed just 35 yards.

McVay jokingly said he's “limited for the rest of the week” after getting clocked in the jaw and shoulder from the blind side by rookie tight end Roger Carter, who was running onto the field during his NFL debut. “He's a great kid,” McVay said with a smile. “He didn't mean to. He apologized to me. When you slow-mo it, it looks a lot worse than what it was.”

LB Terrell Lewis has a bulging disk in his back that limited his mobility against the Chiefs. ... Rookie WR Lance McCutcheon sprained a ligament in his knee.

2011 — The last time the Rams started a season worse than 3-8. General manager Les Snead took over the following season.

Two home games in five days, starting with their first meeting of the season with the Seahawks. Los Angeles has won eight of 10 over Seattle, but the Rams are significant home underdogs.