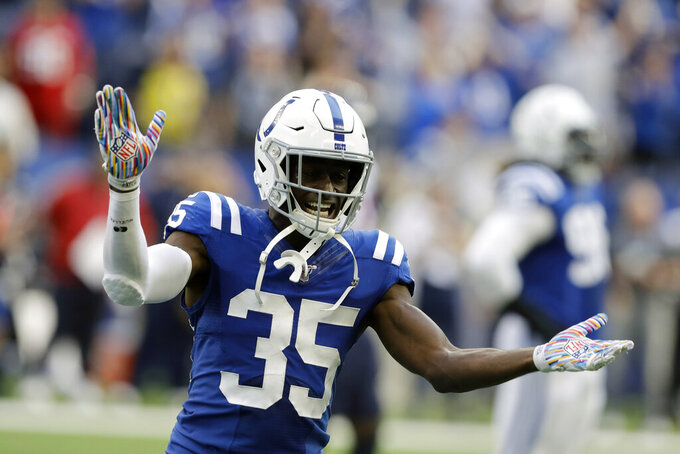 FILE - In this Sunday, Oct. 20, 2019 file photo, Indianapolis Colts' Pierre Desir (35) reacts during the second half of an NFL football game against the Houston Texans in Indianapolis. Two people with direct knowledge of the contract say the New York Jets and cornerback Pierre Desir have agreed to terms on a deal, Sunday, March 22, 2020. (AP Photo/Darron Cummings, File)

NEW YORK (AP) — Two people with direct knowledge of the contract say the New York Jets and cornerback Pierre Desir have agreed to terms on a deal.

One of the people tells The Associated Press the contract for the former Indianapolis Colts standout is for one year. Financial terms weren't immediately available. The people spoke to the AP on condition of anonymity Sunday because teams can't announce deals until they are officially signed.

The Athletic first reported the Jets' agreement with Desir, who was released by Colts on Saturday.

The 29-year-old defensive back spent the past three seasons with Indianapolis, where he had 161 total tackles, five interceptions, 26 passes defensed, two forced fumbles and a fumble recovery in 37 games, including 29 starts.

Desir signed a three-year contract worth $22.5 million — including $12 million guaranteed — last March, but the Colts saved nearly $7 million on their salary cap for this season by releasing him.

Cornerback is one of Jets general manager primary targets to improve this offseason, especially after releasing former starters Trumaine Johnson and Darryl Roberts earlier this week. New York re-signed nickel cornerback Brian Poole and agreed to terms with Arthur Maulet, but were still in need of starting-caliber defensive backs on the outside.

Desir should fill one of those voids. He was drafted in the fourth round by Cleveland out of Lindenwood University in 2014, and played two seasons with the Browns. Desir also spent time with the Chargers and Seahawks before being claimed off waivers by the Colts in 2017.