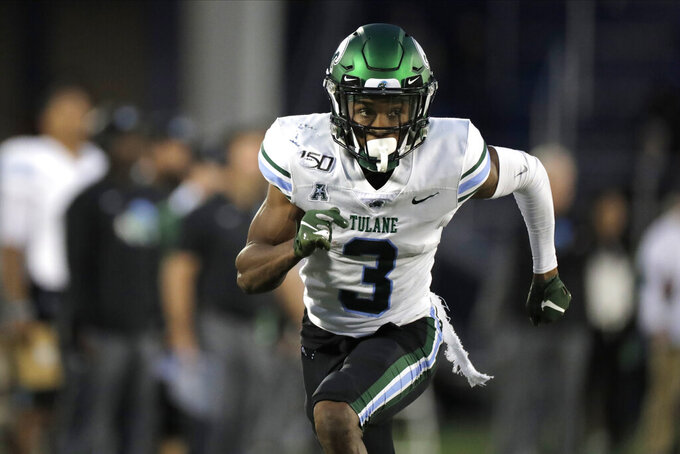 FILE - In this Oct. 26, 2019, file photo, Tulane wide receiver Darnell Mooney runs a route against Navy during the second half of an NCAA college football game in Annapolis. The Chicago Bears selected Mooney in the fifth round of the NFL football draft on Saturday, April 25, 2020. (AP Photo/Julio Cortez, File)

The Chicago Bears drafted a big tight end and a speedy receiver. They didn't ignore their defense, either.

How big a jolt they gave themselves won't be known for awhile. But general manager Ryan Pace insisted they are in a better spot after a disappointing season.

“That was the goal, right? To strengthen our team and we'll come out of this whole offseason process better,” he said. “We definitely feel like we've improved our team.”

The Bears were busy on Saturday, adding a pair of fifth-round picks to go with the one they already had.

The Bears traded a 2021 fourth-rounder to Minnesota to take Tulsa defensive end Trevis Gipson in the fifth round at No. 155 overall, hoping he can develop into a threat on the edge. They grabbed Georgia Southern cornerback Kindle Vildor eight picks later.

They acquired a third selection in the round when they traded up with Philadelphia to draft speedy Tulane receiver Darnell Mooney at No. 173. They spent their final two picks on offensive linemen, taking Colorado's Arlington Hambright at 226 and Tennessee State's Lachavious Simmons at 227.

The Bears have been busy coming off an 8-8 season. The Monsters of the Midway went in with Super Bowl hopes after winning the NFC North at 12-4, only to miss the playoffs for the eighth time in nine years.

Chicago was a first-round spectator in the draft for the second year in a row after sending the picks to Oakland for Khalil Mack prior to the 2018 season. Once it was their turn to pick, the Bears wasted no time taking a tight end, drafting Notre Dame's Cole Kmet at No. 43 before selecting Utah cornerback Jaylon Johnson at No. 50.

“He's the total package,” coach Matt Nagy said of Kmet. “We were joking he's like RoboCop. He can block. He can catch. He can do a lot of good things.”

A late bloomer at Tulsa with an explosive first step, the 6-foot-3, 261-pound Gipson will line up as an outside linebacker with the Bears.

He gained 60 pounds in college and went from four sacks as a junior to eight as a senior. He's looking forward to playing with Mack.

“He's one of my favorite players,” said Gipson, whose father played basketball at Texas. “He's one of the guys I try to model my game after.”

A gifted athlete who can lock onto a receiver, Vildor had two interceptions and six pass breakups as a senior despite being slowed in October by an ankle injury he said is now fine.

Mooney ran a 4.38 40-yard dash at the combine and showed a knack in college for turning short throws into huge gains. But at 5-10, there are concerns about his size. He also had issues with drops. And his yardage dropped from 993 as a junior to 713 even though he had the same number of receptions (48) both seasons.

The 6-5, 300-pound Hambright was honorable mention All-Pac-12 at left tackle as a graduate transfer playing under former Bears defensive coordinator Mel Tucker at Colorado. He previously played at Garden City Community College and Oklahoma State, and could wind up at guard in Chicago. Simmons, 6-5 and 290 pounds, was a tackle and guard in college and started all 12 games last season for a team that averaged 400 yards.

The Bears addressed the tight end problem by signing Graham and drafting Kmet.

The question is how much Graham has left after getting released by Green Bay and whether Kmet — a Bears fan growing up in the Chicago suburbs — can deliver for his hometown team.

Chicago's tight ends combined for 395 yards and none had more than 91 all last year.

The Bears not trading into the third or fourth round was a little surprising. But there were no stunning moves by Chicago in this draft.

The Bears might still look for help on the offensive line and a quarterback to go behind Trubisky and Foles. Pace again said they have not made a decision on Trubisky's fifth-year option. But he did say the Bears signed linebacker Ledarius Mack — Khalil's brother — as an undrafted free agent out of Buffalo.