Chiefs get swagger back during 26-23 victory over Vikings 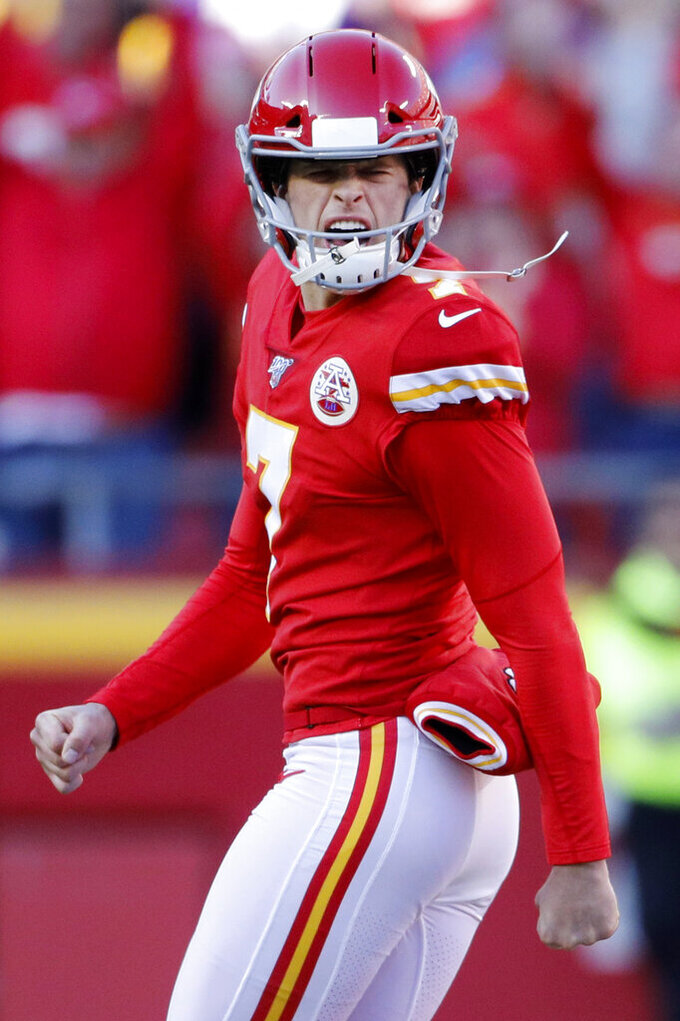 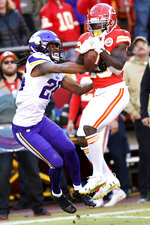 KANSAS CITY, Mo. (AP) — The Kansas City Chiefs got far more than a couple of players back from injury and a desperately needed victory over the Minnesota Vikings to snap a three-game home losing streak.

They also got their confidence back.

Just listen to wide receiver Tyreek Hill, who was all smiles Sunday after Harrison Butker's 44-yard field goal as time expired lifted the Chiefs to a come-from-behind 26-23 victory:

— On his spectacular 40-yard touchdown reception, when it looked as if Matt Moore's throw had sailed long: "No, man. Can't nobody overthrow me. Don't do that. Don't do that, all right?"

— On being sent in to return a late punt, with the outcome still hanging in the balance: "I said, 'Let's go.' It's either going to be a bad kick or a touchdown. So, it was a bad kick."

— On running side-by-side with Damien Williams on the running back's 91-yard touchdown run: "If I'd had five more yards, I would have stripped the ball from him. I told him that."

Hill has never been short on confidence, of course. But the way it was overflowing in a jubilant locker room stood in stark contrast to the past few weeks, when the Chiefs had struggled to defend home turf and lost star quarterback Patrick Mahomes to a dislocated kneecap.

The self-assurance the Chiefs (6-3) had in racing to a 4-0 start had returned.

"It felt good. It felt good to get out there, get with my guys, get the win," said defensive tackle Chris Jones, who'd missed three games with a groin injury. "We needed it. It's been a while."

Now that their confidence is back, they could be getting Mahomes back, too. He sure looked fine racing off the sideline and joining Butker and the rest of the Chiefs in jumping up and down in a wild midfield party following the game-ending field goal.

Mahomes has practiced on a limited basis the past two weeks and was questionable for Sunday.

"He wants to be out there. It's not his decision on this," Chiefs coach Andy Reid said. "We kind of backed up on it. We listened to the doctors, the trainers and made the decision. If he had it his way, he would have played the next play after it happened. That's how he's wired."

The Chiefs' defense is hitting its stride under new coordinator Steve Spagnuolo. It dominated the Broncos, played well in a loss to the Packers, then shut down Kirk Cousins and the Vikings' array of weapons. Cousins had 220 yards passing while Dalvin Cook was held to 71 yards rushing.

Butker saved what had been a tough day for the Chiefs' special teams. Mecole Hardman coughed up a kickoff, leading to points for Minnesota, then made a mistake by not making a fair catch on a punt that was downed at the Chiefs' own 3-yard line.

Williams, who earned the starting job off big performances late last season, is finally looking like a lead running back. He ran 12 times for 125 yards, most of it coming on his 91-yard TD run.

LeSean McCoy has ceded time to Williams the past few weeks. He had just three carries for nine yards against Minnesota, and he caught a single pass that went for no gain.

Nobody else got hurt for Kansas City, which came as a relief after weeks of mounting injuries. Along with Mahomes, the Chiefs soon could get back LT Eric Fisher (groin), RG Laurent Duvernay-Tardif (ankle), CB Kendall Fuller (thumb) and DEs Frank Clark (neck) and Alex Okafor (ankle).

Four and 25 — That's the number of penalties and penalty yards for the Chiefs against Minnesota, a big step forward for a team that has been plagued by flags for much of this season.

The Chiefs don't return to Arrowhead Stadium for almost a month. They visit the Titans next week, then face the Chargers in Mexico City, before getting their long-awaited bye. Their next home game is Dec. 1 against Oakland.