Cook runs over Lions, Vikings rough up Stafford in 34-20 win 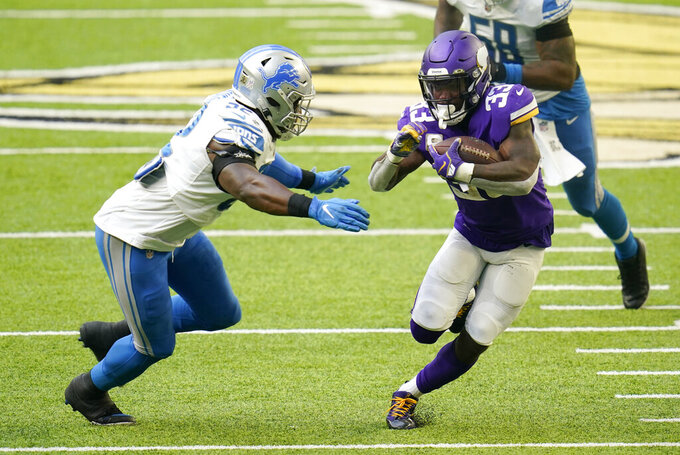 Less than four years after leaving Adrian Peterson's historic accomplishments in the past, the present and future of the backfield with Cook has never looked brighter.

Cook kept his brilliant season rolling by rushing for a career-high 206 yards and two scores on 22 carries, leading the Vikings to a 34-20 victory over the Detroit Lions on Sunday with Peterson watching from the opposite sideline.

“I’m just glad that I got a chance to watch him growing up as a young kid,” said Cook, who embraced Peterson at midfield after the game. “To see that, it was something special for me. He doesn’t know how he impacted my career.”

Kirk Cousins threw for three touchdowns — two to tight end Irv Smith Jr. — in his second straight turnover-free performance for the Vikings (3-5), who averaged 8.9 yards per play on the way to their first home win this season. After sitting out one game with a groin injury, Cook has 478 yards and six touchdowns from scrimmage in wins over Green Bay and Detroit to nudge the Vikings closer to contention for the expanded playoffs.

“We’re just trying to play catch-up, and I’m just trying to give my team a fighting chance,” said Cook, who passed Tennessee's Derrick Henry in rushing yards for an 858-843 lead atop the league. Cook has played in one fewer game with 79 fewer carries than Henry.

Lions quarterback Matthew Stafford, who didn't practice all week due to coronavirus exposure protocols, left the game in the fourth quarter for concussion evaluation after taking a knee to the helmet during a sack. He was cleared of the head injury, but the Lions (3-5) left the stadium with little satisfaction.

Stafford was picked off on consecutive possessions in the third quarter, first at the Minnesota 12 and then in the end zone. Chase Daniel threw another interception after taking over.

“Just mistakes. I felt like I was playing at a pretty good clip there for a little bit,” said Stafford, who was missing leading receiver Kenny Golladay to a hip injury. He completed 16 straight passes in the first half, all on underneath routes while the Vikings gave their inexperienced cornerbacks continued insurance with a heavy dose of two-deep safety looks.

Marvin Jones Jr. caught a touchdown pass late in the second quarter that cut the lead to 13-10, but the Vikings responded by driving 87 yards in six plays and 64 seconds. Former Lions running back Ameer Abdullah took a screen pass 22 yards for a score, giving Minnesota a 10-point advantage at the break.

The show again belonged to Cook, whom Peterson admiringly called “a lethal weapon” this week. Cook, who leads the NFL with 12 rushing scores, even delivered a jarring pickup block on former teammate Everson Griffen, making his debut for Detroit at defensive end, to prevent a disruption of Smith's second touchdown.

“He’s going to do everything. That’s why he’s a captain. That’s why he comes to work every single day,” Vikings coach Mike Zimmer said.

Cook polished off his latest masterpiece early in the fourth quarter with a 70-yard scoring romp he jump-started by powered straight through the arms of defensive tackle John Penisini.

“One of the most impressive things I thought was really the yards after contact. There were a couple plays where we’ve got him right there where we need him, and he was able to kind of break free and turn those into some really big plays,” said Lions coach Matt Patricia, who fell to 0-5 against the Vikings and 2-13 in NFC North games, with nine straight division losses.

Peterson, who returned to Minnesota with Washington last year and with New Orleans in 2017, had eight carries for 29 yards and three catches for 14 yards while again dropping behind rookie D'Andre Swift in the pecking order. Jaleel Johnson stopped Peterson for a 4-yard loss on third-and-goal from the 1 in the second quarter.

Matt Prater's 46-yard field-goal attempt went wide left for the Lions in the first quarter, the only missed kick of any type in 43 attempts against the Vikings this season.

Dan Bailey missed an extra point for the Vikings, who had two punts blocked in the second half, by Austin Bryant and Romeo Okwara.

Lions: Rookie CB Jeff Okudah hurt his ankle in the third quarter. ... Backup CB Tony McRae hurt his right knee while blocking during a punt return in the second quarter and was taken off on a cart.

Vikings: Smith had his right upper leg looked at by the medical staff after his second TD, in the third quarter. He didn't return. ... Kris Boyd started at CB for Cameron Dantzler (concussion). With Mark Fields joining Mike Hughes on injured reserve this week and Holton Hill (foot) sidelined for a fourth straight game, the Vikings were missing four of their top six CBs.

Lions: Host Washington next Sunday, their second of four consecutive games against teams that currently have losing records.