Defending champion Rams, Saints in urgent need of a victory 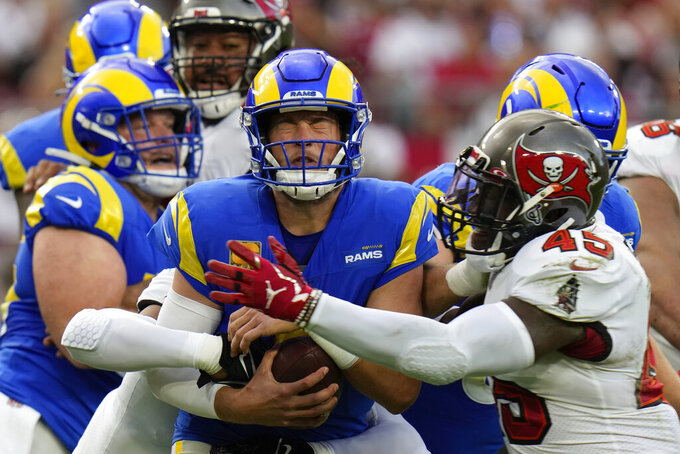 NEW ORLEANS (AP) — The defending champion Los Angeles Rams and the New Orleans Saints have been on parallel paths this season.

Both have been disappointments, are multiple games below .500 and urgently need a victory as they meet in the Superdome on Sunday.

“We got a team that’s coming in here that’s similar in some ways in that they had high expectations and things haven’t gone as well for them,” Saints coach Dennis Allen said. “We’re kind of in the same boat.”

The Saints (3-7) have lost two straight by double digits and have dropped four of their last five games, but remain just two games behind first-place Tampa Bay (5-5) in the anemic NFC South.

“This is where we’re at and you’ve got to be able to handle it,” McVay said. "What you do want to do is make sure that you don’t ever press the panic button.

“As a competitor, it certainly is challenging, it’s not fun,” McVay added. "But you only have one option. We talk about controlling those things that you can control and that’s how we move forward, while not minimizing that there’s a lot of things that we can collectively do better to try to change the way that it’s looking when you guys are seeing us play those games.”

Because Allen had been retired coach Sean Payton's understudy for many seasons, he kept much of Payton's staff and still had core players from from four straight playoff teams (2017-20). So, the prevailing opinion around team headquarters was that they had a chance to vie for a fifth postseason berth in six years.

But the Saints have had to play without several injured stars this season, none more prominent that two-time All-Pro receiver Michael Thomas.

New Orleans also has been plagued by mistakes. The Saints' turnover differential is an NFL-worst minus-12.

Like the Saints, the Rams are missing multiple starting offensive linemen. But none of their injuries are more impactful than Cooper Kupp's ankle sprain, which landed the star receiver on the reserve list.

“Any time that you lose a player like that, you never replace him,” McVay said. “But what it does provide is an opportunity for us to learn about a lot of other guys from that receiver room and really our offense in general. So, you have to look at it through that lens.”

Both teams began the week with questions at quarterback that appeared to be sorted out as the week wore on.

The Rams' Matthew Stafford returned to practice from a concussion and appeared on track to play Sunday.

Allen began the week by saying his staff was looking at the possibility of returning Jameis Winston to the lineup after the offense had its least productive outings of the season during the past two games.

But coaches ultimately decided problems on offense had to do with much more than the performance of Andy Dalton, who is 2-5 as a Saints starter.

“The last two weeks, we haven't been effective on first or second down, whether that's running the ball or even just some throw and catches," Saints offensive coordinator Pete Carmichael Jr. said, noting that nine of New Orleans' 12 third downs last week involved unfavorable distances of 7 or more yards to go.

“That's not good,” Carmichael said. “You never really get into a rhythm."

Kupp’s absence is a huge blow to the Rams’ offense, which has relied heavily on the All-Pro receiver. Los Angeles has no easy way to replace his production, particularly with big offseason signing Allen Robinson still struggling to make an impact at midseason.

Expect plenty of snaps for Robinson and Van Jefferson, who appears to be close to full health after missing the season’s first six games, along with Ben Skowronek and maybe even Lance McCutcheon, an undrafted free agent who surprisingly made the roster.

Jordan and fellow Saints defensive captain Demario Davis could be in for a feast when the Rams use their 10th different starting combination on their shaky offensive line.

Meanwhile, the Saints could be without three starting offensive linemen this week. Center Erik McCoy went on injured reserve last week, and it wasn't clear if Hurt or Peat would play.