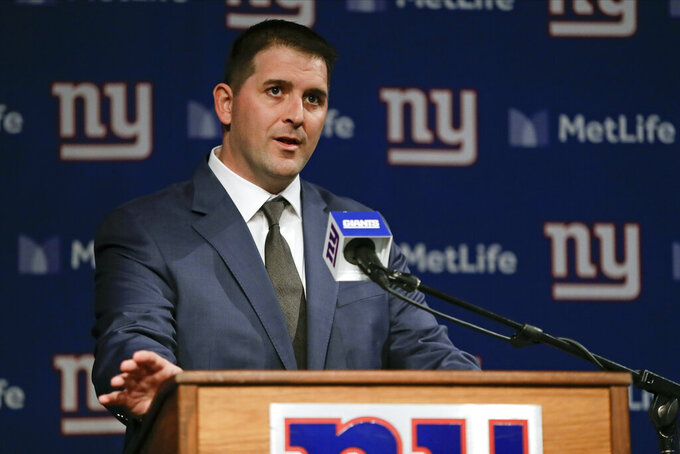 FILE - In this Jan. 9, 2020, file photo, Joe Judge, the new coach of the New York Giants NFL football team, speaks during a news conference in East Rutherford, N.J. The 38-year-old rose to the top quickly by being prepared. It is how he is approaching this time of isolation caused by the coronavirus pandemic. It’s something no other coach has gone through, so Judge does not see himself at a disadvantage in starting to rebuild a team that has won 12 games in three seasons. (AP Photo/Frank Franklin II, File)

Joe Judge isn't heading into his first season as coach of the New York Giants worried about virtual training, when players will be able to report for workouts, or being the new kid in the NFL coaching ranks.

The 38-year-old rose to a top job by being prepared, and that's how he is approaching this extraordinary season of isolation caused by the coronavirus pandemic.

What is happening is new for all coaches, so Judge does not see himself at a disadvantage in starting the process of rebuilding a team that has won 12 games in the last three seasons.

“I think the advantage goes to whoever is best prepared from this point forward,” Judge said Wednesday in a conference call. “I don’t think any established program is at an advantage over anybody else. It’s how you can find a way to communicate with your players and deliver a message.”

The Giants plan to start their virtual learning program Monday. Judge wants the players to feel like it's a normal first day, even though they will be at home instead of the team's headquarters in East Rutherford, New Jersey.

Judge wants them to be comfortable using the software for their systems, adding current players are probably better prepared to deal with it than at any previous time. He said the day will start with players being online with their position coaches. Learning the playbook will follow.

Judge has taken over the basement in his home since the league ordered team personnel to stay at home. He starts early and finishes late. He has his draft board set up for next week.

“I have a golden retriever (Abby) sitting on the couch next to me for about 15 hours a day,” Judge said. “Right now, she can probably tell you more about who we’re going to take in the first round than anybody else.”

Judge said he wants his draft picks to be versatile players who fit into his system and can be used to expand that system. He wants players who can make an impact and have an upside, too.

The biggest question most people have is when will things return to normal, of course. Judge has put together multiple plans for that.

“We’ve made four calendars already in anticipation of different scenarios,” he said. “We have them color coded, so if we get the players as scheduled, we’re working off the blue calendar. If we don’t get the players, we’re working off the red calendar. If we get them later in the spring, we’ll pull up the purple calendar. We have different scenarios mapped out, so we have a plan of attack when that time comes. It’s our job to figure it out and have a plan for the players.”

If Judge has a concern heading into this season, it's injuries. The last time players missed training time was during the lockout of 2011. It lasted from early March to July 11. A lot of injuries occurred that season.

“That’s really our top concern right now is football-wise making sure the players can physically prepare their bodies and we can give them the resources and tools to do so," he said, “so that when we return to play everyone can play safely and aggressively."