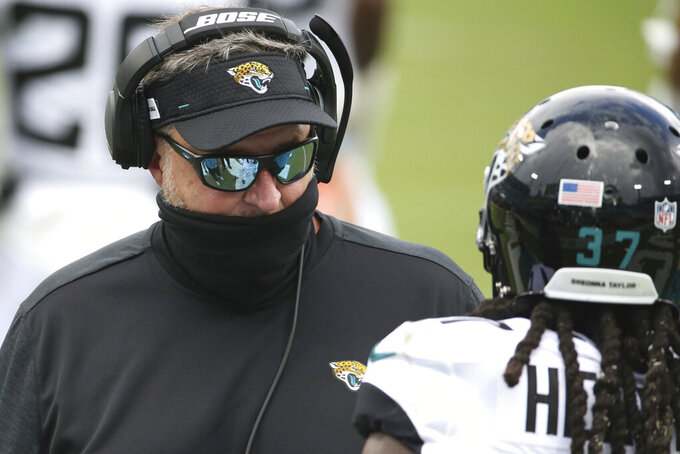 Jacksonville Jaguars head coach Doug Marrone, left, talks with cornerback Tre Herndon during timeout in the first half of an NFL football game against the Indianapolis Colts, Sunday, Sept. 13, 2020, in Jacksonville, Fla. (AP Photo/Stephen B. Morton)

JACKSONVILLE, Fla. (AP) — Every decision the Jacksonville Jaguars made over the last year had one of two goals in mind: fix the salary cap or improve the locker room.

It’s hard to question any of those moves now.

The Jaguars showcased their revamped roster and rehabilitated culture with a 27-20 victory over Indianapolis in the season opener Sunday. They looked nothing like the 2019 team that surely would have pointed fingers after falling behind early, moaned and groaned on the sideline for three hours, and ended up losing by double digits.

This version stuck together, made key plays and rallied for a win few outsiders saw coming.

“A lot of us, sometimes, we can tend to lose faith in team, just the word team,” coach Doug Marrone said. “This team has really instilled that faith for me. ... With no disrespect to any other team I’ve been on, outside of just being a line coach and having your own room, this is the closest I’ve felt to a team since I’ve been a head coach.”

It’s only one game, and it came against an AFC South rival that had lost its previous four trips to Jacksonville by a combined score of 125-46. But it’s no doubt progress for the Jaguars, a step in the right direction following a year filled with head-scratching calls.

“It’s huge,” Minshew said. “Until you actually do it, there’s a part of it you have to prove it to yourself. We had a lot of rookies and second-year players step up and make huge plays for us. When they are playing with confidence, you love a young team that plays with confidence. They have the energy. They got that swag about them.”

Just about everything. Undrafted rookie James Robinson made some quickly forget about Fournette. First-round draft pick CJ Henderson showed he’s an upgrade from Bouye and has the potential to be as good as Ramsey and with fewer headaches. Safety Josh Jones and defensive linemen Taven Bryan, Abry Jones and K’Lavon Chaisson also stood out.

Despite the win, the offense managed just 241 yards. It was the fourth time in the team’s past six games in Jacksonville that it failed to gain more than 252 yards.

But the Jags were balanced on offense, played turnover-free football, converted 50% on third downs and were perfect in the red zone — all issues last season.

“I’m really proud of how we played, and I think we are just scratching the surface,” Minshew said.

Second-round pick Laviska Shenault scored a touchdown in his NFL debut and helped set up another. The former Colorado receiver finished with three catches for 37 yards and a score to go along with two carries for 10 yards.

New offensive coordinator Jay Gruden designed a number of plays around Shenault, including putting him in the wildcat formation. On Minshew’s TD pass to DJ Chark in the second quarter, Shenault started in motion, stopped in the flat and drew two defenders as Minshew pump-faked in his direction. Chark ran by both and was wide open in the back of the end zone.

Dede Westbrook was a healthy scratch for the first time in his four-year NFL career. The Jaguars went with a pair of rookies: Shenault and fifth-round pick Collin Johnson instead. Johnson had a 14-yard reception and did a backflip on the field after the final snap.

Westbrook, meanwhile, was inactive after catching 66 passes in each of the past two years. He has 159 receptions for 1,716 yards and nine touchdowns in three seasons.

He appears to be the odd man out, starting the season behind Chark, veteran Chris Conley, Keelan Cole and two rookies.

Safety Jarrod Wilson landed on injured reserve Monday with a left hamstring injury. He's expected to miss at least a month. Fellow safety Josh Jones sustained a leg contusion but should be fine.

72 — combined points the Jaguars have allowed in their past two trips to Tennessee. They have lost six straight in Nashville, last winning there in 2013.

Beating the Titans on the road would be another huge stride for a franchise intent on proving naysayers wrong in 2020.