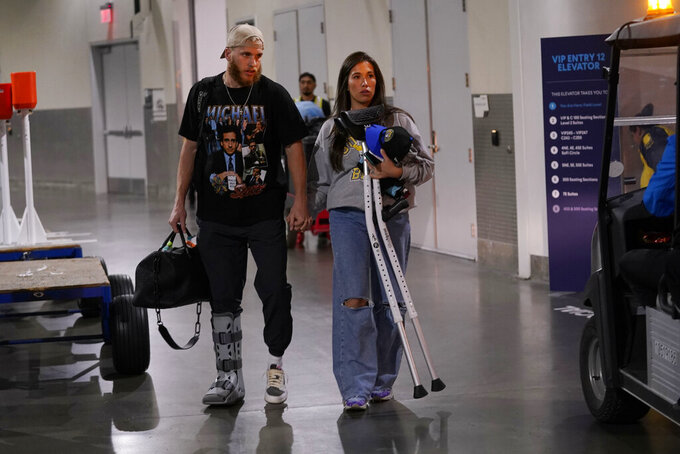 Los Angeles Rams wide receiver Cooper Kupp, left, walks out in street clothes and a boot on his foot with wife Anna after Kupp suffered an injury in an NFL football game against the Arizona Cardinals Sunday, Nov. 13, 2022, in Inglewood, Calif. (AP Photo/Mark J. Terrill)

LOS ANGELES (AP) — Nine games and exactly nine months after winning the Super Bowl at SoFi Stadium, the Los Angeles Rams found themselves in a new position in their home arena Sunday.

Last place in the NFC West.

The Rams' half-decade of success under coach Sean McVay has come unraveled this year with a 3-6 record and little reason to think they can turn it around in time to make the playoffs, let alone defend their title.

After a 27-17 defeat at the hands of a three-win Arizona team playing its backup quarterback, Los Angeles is at the lowest point in McVay's tenure, with five losses in six games and a series of long road trips upcoming.

“This team has a lot of fight,” receiver Van Jefferson said Monday. “This team is resilient. We would have loved to have got the win, but we just need to execute better. ... We’re going to continue to fight, continue to play and let the chips fall where they fall. Nothing is over until it’s over, so we’re just going to keep playing, and hopefully everything falls in our favor.”

Jefferson's optimism is reflected across the roster, yet the reasons for the slide are the same almost every week: McVay's offense doesn't have the talent, the depth or the game plans to perform at the level to which it has become accustomed.

That was obvious while both of Matthew Stafford's backups managed little production behind another makeshift offensive line against the Cardinals, and it is likely to be even more obvious if AP Offensive Player of the Year Cooper Kupp misses time with what looked like a significant ankle injury incurred late against the Cardinals.

Stafford seems likely to return to practice this week, but John Wolford led an offensive effort that was only marginally worse than the ones produced by the Rams with Stafford in uniform. The Rams are 31st in the NFL in yards per game (282.7), 29th in scoring (16.4) and last in yards rushing (68.1).

Until the offense raises its game, the defense's solid season won't matter much. The Rams are still sticking together in hopes of finally getting on a roll that will salvage something from this season — even if time is running out.

“A lot of the guys on this team were on the Super Bowl team, so we know what complementary football looks like,” edge rusher Terrell Lewis said Monday. “Championship-type teams and championship-type cultures, there's never room to finger-point. That's never going to solve anything. ... Nobody plays the perfect game.”

The defense continues to play well enough to win, a few minor quibbles aside. Los Angeles allowed only three drives longer than 35 yards by the Cardinals, who scored 10 of their 27 points on short fields created by the Rams' turnovers. Coordinator Raheem Morris' unit is sixth in the NFL with 310.8 yards allowed per game, and new linebacker Bobby Wagner is playing tremendously.

The backup quarterback position. McVay's abiding faith in Wolford over the past four seasons is remarkable, but Wolford didn't play well enough against the Cardinals until the final drive. His arm strength and accuracy both looked shaky, and his athleticism wasn't exploited enough. The Rams might consider getting a tested NFL quarterback soon to back up a starter who will be 35 next season.

Jefferson finally made an impact after two offseason knee surgeries, catching three passes for 27 yards and a late score despite playing only 17 snaps. He tried to give the game ball from his scoring catch to Wolford in honor of the QB's first NFL TD pass, but Wolford told Jefferson to give it to his father, Cardinals receivers coach Shawn Jefferson. The Rams desperately need playmakers if Kupp is out, and Jefferson will get as many touches as he can handle.

The Rams' defensive backs held Arizona to 238 yards passing but still gave up a handful of important receptions at big moments. David Long Jr., who largely took the job of rookie Derion Kendrick this week, and Troy Hill both lost key matchups. Los Angeles clearly doesn't have as much talent in its secondary as in previous seasons, which makes the defense's success even more remarkable.

The Rams didn't provide an update on Kupp or Stafford early Monday.

28 — The number of three-and-out drives by the Rams' offense this season. Los Angeles had only 25 in all 17 games last season.

A visit to New Orleans to face another three-win team. This meeting with the Saints is a chance to get back on track in a matchup that is eminently winnable — but so was the Rams' visit from the Cardinals.