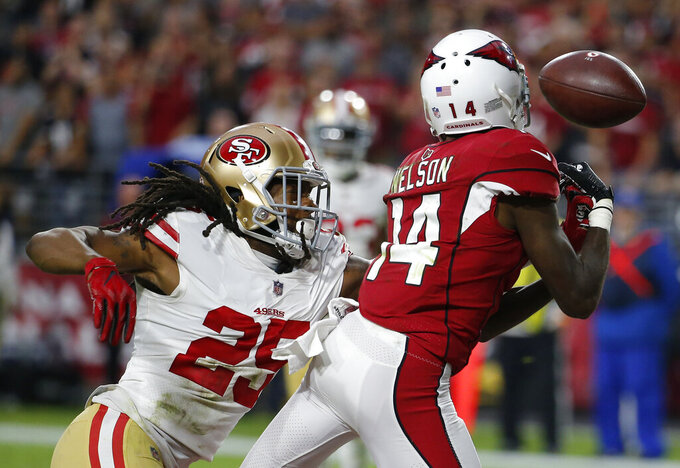 FILE - In this Oct. 28, 2018, file photo, San Francisco 49ers cornerback Richard Sherman (25) defends on a pass to Arizona Cardinals' JJ Nelson during an NFL football game in Glendale, Ariz. Sherman had a strong season in his first year in San Francisco, showing that he had recovered from an Achilles' tendon injury that ended his 2017 season early. (AP Photo/Rick Scuteri, File)

After one year of rebuilding and one plagued by injuries, the San Francisco 49ers had no more excuses. The third year of the Shanahan-John Lynch era was time for the struggling franchise to take a big step and finally get back to being a contender after five down seasons.

"You get a new general manager, new head coach in here, it's going to take a year or two to get people that they want, the system that they want, everybody dialed in," said left tackle Joe Staley, one of the only remaining ties to the franchise's previous playoff berth in 2013. "Last year was the year we really felt like going into the year we had the pieces in the right spots. I think we added a ton more this offseason. It's time to win."

With a healthy Jimmy Garoppolo at quarterback after his first full season in San Francisco was aborted by a season-ending knee injury in Week 3, a defensive line upgraded by the additions of two dangerous edge rushers in Dee Ford and rookie Nick Bosa, and a core of young players ready to emerge as key contributors, the Niners believe the pieces are now in place.

San Francisco won 10 games total in the first two seasons under Shanahan and Lynch and has the second-most losses in the NFL (47) since Jim Harbaugh was forced out following the 2014 season. Shanahan and Lynch have brought needed stability after a run of three coaches in three seasons, but the results haven't been there yet.

"We're very happy with the people we have in this building, talent-wise and character-wise. That's good, we've accomplished that part," Shanahan said. "Now we need to win some games, we need to get better. I think our guys feel that, we feel that, and I think that's why we added some key players that we thought would help us.

Here are some other things to watch on the 49ers this season:

Garoppolo was a revelation after being acquired midway through the 2017 season from New England, going 5-0 as starter to end the season and earn a $137.5 million, five-year contract. Garoppolo didn't look nearly as efficient at the start of last season despite having a full offseason to absorb Shanahan's offense. He remains a mostly untested commodity with 10 career starts in five seasons and has struggled in training camp and exhibitions. He must show that the Niners made the right choice when they invested in him.

The 49ers set records for futility last season by making just two interceptions all year and generating only seven takeaways. The minus-25 turnover margin was the second worst in the NFL over the past 18 seasons, a major reason for the lack of success. San Francisco is counting on the additions of Ford and Bosa up front to put more pressure on quarterbacks and lead to bad decisions and turnovers. Speedy linebacker Kwon Alexander also could make a big impact.

Season-ending injuries to Garoppolo and starting running back Jerick McKinnon last September derailed San Francisco's season almost before it started. The team dealt with several more injuries throughout the year, especially at running back, linebacker and the secondary. That led the organization to overhaul its strength and conditioning and medical departments in the offseason. Whether that pays off remains to be seen as the team has dealt with several minor injuries early in training camp that could impact the availability of some key players at the beginning of the season. McKinnon is out again for all of this season after having several setbacks this summer, although the team is hopeful none of the other injuries will have long-term implications.

Richard Sherman had a strong season in his first year in San Francisco, showing that he had recovered from an Achilles tendon injury that ended his 2017 season early and led to his departure from Seattle.

But it didn't matter much because quarterbacks picked on the other side of the field where second-year cornerback Ahkello Witherspoon struggled mightily. The Niners also had issues at safety with Jimmie Ward and Jaquiski Tartt hampered by injuries. The team made few major moves to upgrade the secondary, hoping that better health and development of young players such as Witherspoon and Tarvarius Moore provide a needed boost.

Tight end George Kittle emerged as a star in his second season, setting an NFL record for tight ends with 1,377 yards receiving. The situation at wide receiver is much less settled. Dante Pettis showed flashes as a rookie but has yet to prove he can handle the load as a No. 1 receiver in the NFL. Marquise Goodwin has blazing speed but has a more limited role. There are no other proven players at the position and rookies Deebo Samuel and Jalen Hurd will be counted on to make an impact this season.