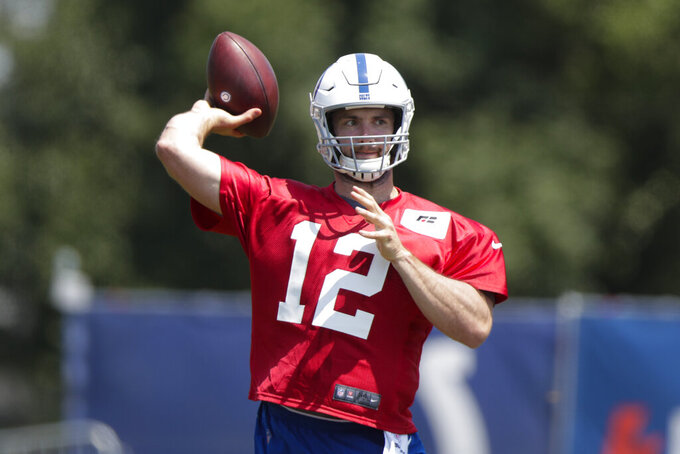 FILE - In this Thursday, July 25, 2019 file photo, Indianapolis Colts quarterback Andrew Luck (12) throws during practice at the NFL team's football training camp in Westfield, Ind. Andrew Luck will likely miss the rest of the preseason with an injury near the front of his left ankle, Tuesday, Aug. 13, 2019. Colts general manager Chris Ballard says the starting quarterback has been dealing with pain in that area since straining his left calf in March. Luck missed all of the team’s offseason workouts and has not participated in full team drills at training camp because of the lingering pain. (AP Photo/Michael Conroy, File) 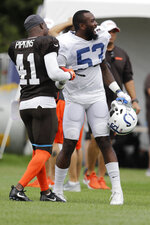 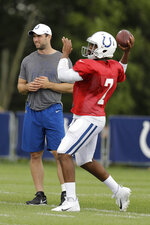 "By the end of the third preseason game I think you just have to know something. You've got to be able to make a call, a move and move on from there," Reich said last week. "Whether we're full speed with Andrew after that third preseason game or, at that point, are we going to go with Jacoby (Brissett)?"

It appears the Colts may finally have turned the corner on Luck's lower left leg injury.

General manager Chris Ballard said Luck's rehab routine changed last week when doctors determined the lingering pain came from the front, not the back between the calf and ankle.

On Saturday, he was on the field for pregame warmups — his first open "workout" since July 28.

If Luck keeps progressing, then the questions will turn into how soon can he play?

"We won't as an organization put any player out there that can't perform at a high level," Ballard said. "I'm not going to put players at risk. So if we feel comfortable, Frank and I and our staff feel comfortable that he can play, then he'll play."

Reich has said repeatedly he will use Luck's input to determine when he can go.

Even if Luck doesn't start the opener, the Colts insist this season won't be a repeat of 2017 when they won four games and missed the playoffs for the third straight year. They believe in Brissett , who started 15 games that season, and they have a stronger supporting cast.

But, of course, with Luck, the Colts would be a legitimate title contender.

There's a direct correlation to Luck's health and Indy's success. In the four seasons he's been healthy, the Colts made the playoffs. In the three seasons he fought off injuries, the Colts missed the postseason.

And if the reigning Comeback Player of the Year stays healthy in 2019, the Colts will be favored to win the AFC South. But the Colts understand they have to play better — with or without their franchise quarterback.

"I know we all want him to have the full-go reps, but we as an entire group have to really focus on getting better ourselves each and every day," offensive coordinator Nick Sirianni said. "As they get better, Andrew will play better. I think we're still growing. I think we can be where we want to be Game 1 — even without Andrew practicing right now."