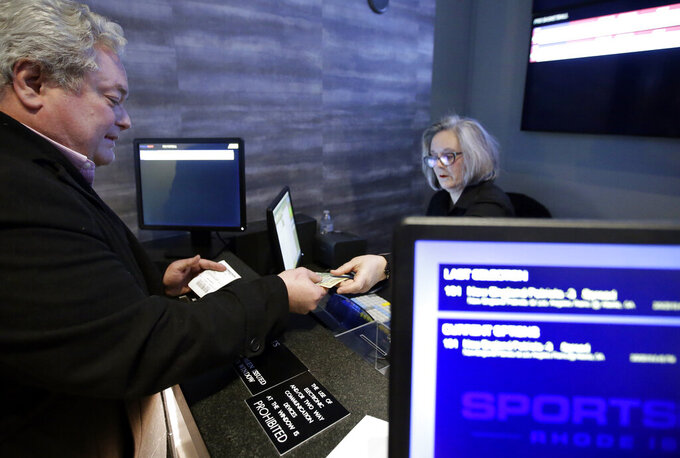 In this Monday, Jan. 28, 2019 photo, Rhode Island state Rep. William O'Brien places a $100 bet at Twin River Casino in Lincoln, R.I., on the New England Patriots NFL football team to win over the Los Angeles Rams in Super Bowl 53. Fans of the Patriots are gearing up for Super Bowl 53 by betting on the game, the first time they can do so legally in New England. Rhode Island is the only state in the region that has launched sports betting so far. (AP Photo/Steven Senne)

LINCOLN, R.I. (AP) — Given their team's success, die-hard fans of the New England Patriots have made Las Vegas like a winter home during Super Bowl week so they can enjoy a fair-weather party while placing bets on the team's chances.

Their destination this time around is a lot closer.

Rhode Island was one of six states that legalized betting on sporting events last year after the U.S. Supreme Court allowed it, ending the effective sports gambling monopoly that Nevada had enjoyed for decades. It is the only state in New England that allows sports betting, making it a focal point for Patriots fans from around the Northeast.

"If you don't have to invest $1,000 going across the country, you're not going to," said Zack Natola, a 30-year-old Patriots fan from Watertown, Massachusetts.

He has traveled to Las Vegas three times to bet on the Super Bowl. For the game this Sunday, he is planning to make the short trip south across the state line to the Twin River Casino in Lincoln, one of two places in Rhode Island that offers sports betting.

He's excited about being able to watch his team and place bets without having to spend the money on a Las Vegas trip.

"It makes it a good weekend," he said.

The states that jumped into sports betting last year and the casinos that offer it are hoping it's a profitable weekend.

In addition to Rhode Island, Delaware, Mississippi, New Jersey, Pennsylvania and West Virginia legalized sports betting after the high court's ruling last spring, as did the District of Columbia. Although New Mexico has not passed a sports betting law, an American Indian casino run by the Santa Ana Pueblo started taking bets without the need for additional state approval. Lawmakers in several other states have filed bills this year to allow sports betting.

In Rhode Island, the state receives 51 percent of the revenue from sports betting — the highest percentage of any state that has legalized it. Revenue from the Super Bowl is expected to boost the state's coffers, but the state lottery and the casino management group aren't making projections on how much.

Gamblers placed about $13 million in wagers on professional sports in December, the first full month of legalized sports betting in the state.

He said the casino is ready for a big crowd Sunday, which he called the "ultimate indoor tailgating party."

"A Super Bowl is an important event anyway," he said. "A Patriots Super Bowl becomes a mega event in New England."

It is exactly that for Sebastian Scardocci, who went to Twin River Casino on Monday to place bets on his favorite player, Rob Gronkowski.

Scardocci, 50, lives in Foxboro, near the home of the Patriots' star tight end and close to the team's Gillette Stadium. In one of hundreds of bets gamblers can place on individual players and outcomes within the Super Bowl, he wagered that Gronkowski would outperform predictions.

Scardocci has traveled to Las Vegas and placed bets through local bookies. He said he and others he knows are excited to be able to have betting so close to home, especially with their team returning to the big game.

"It's neat to have it nearby," said Scardocci, who plans to watch the Super Bowl from home. "We haven't had that option."

Another fan, Tyrone Foster, bet on sports for the first time when he visited Las Vegas last year, but the Twin River Casino is just a few minutes from his home in Central Falls. He was there this week to wager $50 on which team will win the coin toss and other in-game events, known among gamblers as proposition bets.

"It's awesome that Rhode Island has it," said Foster, 27. "It helps with tourism, too. All the benefits really go to the state that has sports betting, and I don't really see much in the way of downsides."

Even a downside in the outcome for New England fans — a Patriots loss — would turn into a win for the state.

That's because Rhode Island casino officials say most of the action has been on New England so far. Beyond Rhode Island, about two-thirds of wagers and three-fourths of the money bet has backed the Patriots, according to Pregame.com, though that could change over four more days of betting.

"God forbid the Patriots lose on Sunday, but it would be a windfall for the state," Gerry Aubin, the lottery's executive director, told state lawmakers who visited the Lincoln casino on Monday.

After the meeting, O'Brien headed for a betting window and put $100 on the Patriots to win.