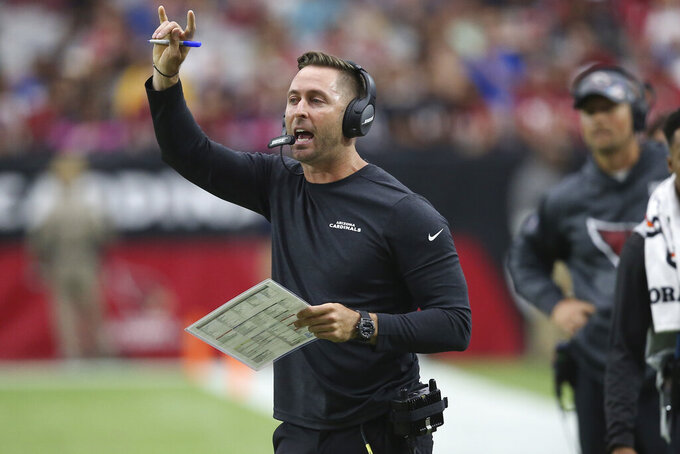 TEMPE, Ariz. (AP) — Cornerback Patrick Peterson's return to the Arizona Cardinals practice facility included a gift for teammate Larry Fitzgerald, whose birthday he had missed while serving a six-game suspension for violating the NFL's policy on performance enhancers.

It was a framed poster of the world's top 100 golf courses. Someday, Peterson hopes to play a few of them with the star receiver.

But first, there's work to do.

"It should be a great 10-game season for me," Peterson said on Wednesday. "I'm planning on this being the best 10 games I've played in my career."

Peterson, a three-time All-Pro, returns just as a young Cardinals team has started to build some confidence. Arizona (2-3-1) has won two straight games and will try to get back to .500 when it faces the New York Giants in a road game on Sunday.

Peterson said he spent a big chunk of his suspension training at 7,000 feet of altitude in the mountains in Flagstaff, about two hours north of Phoenix. He would simulate games each week, placing cones around the field and mirroring different routes, like he would defend on the field.

His only real concern is tackling, which is hard to simulate. But from a conditioning perspective, Peterson said Wednesday's first full workout went well.

"It was a piece of cake," Peterson said. "It felt like a walkthrough for me. I don't know if I was so geeked, the anxiety, or what it was, but it was like I didn't even practice today. I felt really well. I had a great bounce in my step today and just ready to get out there and face some live action."

Peterson's absence hasn't been ideal — the Cardinals rank 30th in the league in pass defense — but it has allowed several young players to get ample experience.

Three rookies, including cornerback Byron Murphy Jr. and safeties Deionte Thompson and Jalen Thompson, have been a part of the recent two-game winning streak.

They've made some good plays. They've also made quite a few mistakes. But everyone on the Cardinals agrees they're much farther along in their development than typical rookies.

"The ability just to say, 'You've got this guy and help in other areas.' I think that's a big positive," coach Kliff Kingsbury said. "When you have a dominant player like him, you can put him on the best receiver and try to help the coverage in other areas, and we weren't able to do that."

Peterson gave Arizona's rookie quarterback Kyler Murray high praise on Wednesday, saying it's obvious that the 22-year-old knows how to win games and has already started to prove it at the NFL level.

The nine-year veteran — who had never missed a game until the suspension — said it's the job of the defense to "take the next step and start finishing football games."

Murray didn't hesitate to say that Peterson got the best of him during Wednesday's practice. He also said it's good to have him back.

Peterson didn't elaborate much on his suspension other than to say he felt bad that he wasn't able to help his teammates during the first six weeks of the season.

He said watching from the couch wasn't much fun.

"I really just hope I did not tarnish what I stand for, what I've done up until this point in my career," Peterson said. "I've always been a great player. I have no reason to cheat. I work my tail off too hard each and every offseason to be in this situation.

It's an unfortunate situation that I wish I could have back, but I can't. We're moving forward. I'm looking forward to the Giants."