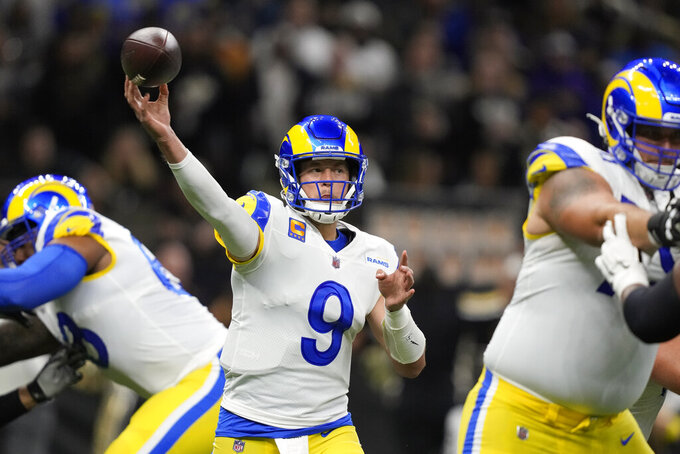 NEW ORLEANS (AP) — An already disappointing season for Matthew Stafford and Los Angeles Rams could be getting worse.

Now tied for the worst 10-game record of any defending Super Bowl champion, the Rams (3-7) lost Stafford to what was feared to be a second concussion in three weeks during a 27-20 defeat in New Orleans that extended their losing steak to four games.

Stafford led an 87-yard touchdown drive just before halftime to give the Rams a 14-10 lead, but he left at the end of his first series in the third quarter after the Saints scored to go ahead 17-14.

The Rams then gave up a 53-yard touchdown pass from Andy Dalton to Chris Olave, trailing 24-14 when reserve quarterback Bryce Perkins entered the next time they had the ball.

“Our guys battled, but you lose Matthew, it makes it challenging,” Rams coach Sean McVay said. “It changes the way you’re really able to operate.”

The prognosis is unclear for Stafford, who put the Rams ahead twice in the first half with touchdown passes of 62 yards to Tutu Atwell and 6 yards to Allen Robinson. Stafford returned just two days before the game in New Orleans after sitting out against Arizona last Sunday while in concussion protocol from a hit he took against Tampa Bay on Nov. 6.

He appeared to hit his head on the Superdome turf during his third-quarter possession and was sacked to end the drive before getting evaluated and walking toward the tunnel.

“I need to talk to the doctors,” McVay said when asked about Stafford’s status. “Obviously we need to make a smart decision for Matthew and see where we’re at with that. I know how he was feeling, and we made the decision it was going to be in his best interest to not have him continue to play.”

The Rams had little chance with Perkins, who'd thrown one career pass in three seasons and played only because second-team quarterback John Wolford was inactive with a neck injury.

Perkins scrambled 23 yards on his second snap, leading to a 33-yard field goal that cut the deficit to 24-17, but he struggled the rest of the way.

He blamed himself for a delay of game penalty and an overthrow of receiver Ben Skowronek that forced a punt after New Orleans extended its lead to 27-17. He took sacks on three consecutive plays late in the fourth quarter.

“That delay of game was totally on me,” he said. "I communicated the wrong call to the offense, and that next play I just overshot him (Skowronek). It definitely could have been cleaner, but it took me a little time to get in the swing of things.”

The issues were not all about the offense, though. The defense allowed 17 points on the Saints' first three possessions of the second half, including a 75-yard touchdown drive to open the third quarter when New Orleans did not face a third down.

“There were some good times where we got some stops defensively, but just not enough,” McVay said. “That first drive of the second half ends up hurting you.”

The Rams are in last place in the NFC West a year after going 12-5 in the 2021 regular season and 4-0 in the playoffs. Los Angeles played Sunday without 2021 Offensive Player of the Year Cooper Kupp, who is expected to undergo ankle surgery and miss the rest of the reason. They lost offensive tackle Ty Nsekhe (ankle) and defensive tackle A’Shawn Robinson (knee) during the game.

And now they are not sure about Stafford, whom a team spokesman said would undergo tests before a decision on whether he would re-enter the NFL's concussion protocol.

“There’s a lot of things we’re working through that I would say are unprecedented,” McVay said. “You continue to battle and make the most of the opportunities when they are presented, and let’s see if we can get guys to play as well as they possibly can."