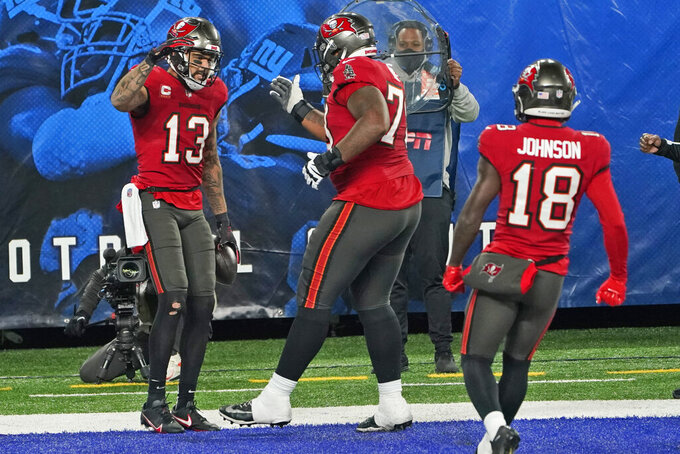 TAMPA, Fla. (AP) — If you’re compiling a list of reasons why the Tampa Bay Buccaneers have emerged as one of the top teams in the NFL, don’t forget to include a pair of high draft picks brought in to help Tom Brady be successful.

Safety Antoine Winfield Jr., is quickly making a name for himself, too, as part of a stout defense that forced two more turnovers to key a 25-23 come-from-behind victory over the New York Giants on Monday night.

Winfield, the son of former NFL cornerback Antoine Winfield Sr., sealed the win by breaking up a potential game-tying, 2-point conversion pass in the end zone with 28 seconds remaining.

The second-round draft pick from Minnesota initially was called for pass interference, but the flag was picked up after officials huddled to discuss the play.

“The ball hit Antoine in the back. To me, it was no pass interference. I thought it was a good call. I don’t know why it took so long” for officials to pick up the flag,” coach Bruce Arians said.

“He’s been consistent since the day he’s gotten here. He verbalizes so much out on the field, which most rookies just will not do — even second-year players,” Arians said. “He’s a baller He’s got it in his bloodlines, and there’s no stage that’s too big for him.”

The Bucs feel the same way about Wirfs, a first-round pick drafted 13th overall out of Iowa. Like Winfield, he’s been a starter since Day 1.

“He’s just a really smart player, a very, very gifted athlete, also. He’s had some of the best pass rushers in the league up against him,” Arians said. “(Khalil) Mack got him a couple of times, but other than that he’s held his own every single week.”

Brady threw for two touchdowns and zero interceptions against the Giants, helping the Bucs rally from a 14-3 deficit by scoring on five straight possessions (two TDs, three field goals) before taking a knee to end the game. Over the past six games, Brady has 17 TD passes vs. one interception.

Arians attributed the team’s slow start against the Giants to sitting around much of the day, waiting for a primetime start in an empty stadium.

You’re on primetime, you expect to come to the stadium and have a ton of energy ... from the fans and everything else. This year’s so different,” Arians said.

“To sit around, get there and it’s like, ‘Is the stadium really even open?’ The lights are on, but (there isn’t) anybody there,” the coach added. “You’ve got to bring your own energy and we did not do a good job.”

TE Rob Gronkowski caught a TD pass from Brady for the third straight game Monday night. It was Gronk’s NFL-leading 81st TD reception since entering the league in 2010.

That’s three more than Jimmy Graham and six more than Antonio Brown, who was activated from the reserve/suspended list on Tuesday.

Brown was ineligible to play while serving an eight-game suspension for multiple violations of the NFL’s personal conduct policy. He signed with the Bucs last week and is set to practice for the first time on Wednesday.

The Bucs were just 4 of 12 on third-down conversions on Monday night, however Arians was not overly concerned.

“Each game is so different. I think our explosive plays lead to more touchdowns, but our third-down conversions in this ballgame, obviously, were not very good,” the coach said. “We had some potential guys open, we just didn’t make the plays. I think it’s been really solid. We’ve been in the 50 percent range for three or four weeks until (Monday).”

WR Chris Godwin (broken finger) didn’t play against the Giants, however he hasn’t been ruled out for next Sunday night’s home game against New Orleans.

Six, as in victories at the season’s midpoint. The 6-2 start matches the franchise best through eight games. The team also started 6-2 in 1979 and 2002.

First place in the NFC South will be on the line when the Saints (5-2) visit Raymond James Stadium on Sunday night. New Orleans won an earlier meeting between the division rivals 34-23.