All Jaguars want for the holidays: a win to end 13-game skid 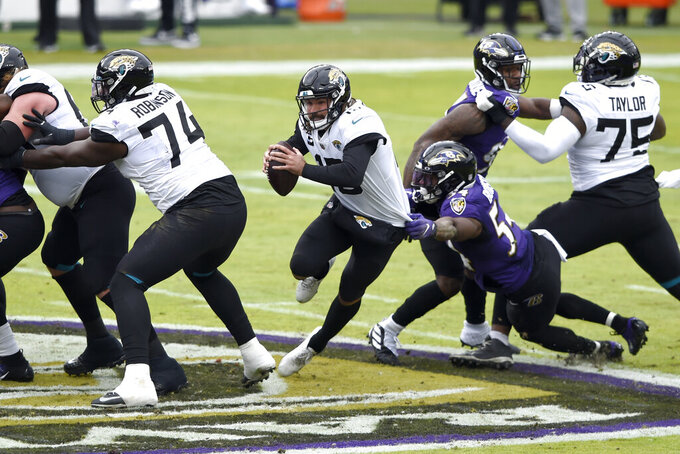 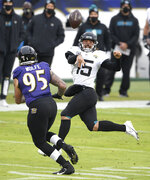 BALTIMORE (AP) — Doug Marrone’s holiday wish list contains only one item. Much like a harried parent searching in vain for a hard-to-locate gift, it’s been an elusive prize for his scuffling Jacksonville Jaguars.

“This team has been going through a lot and is trying hard,” the Jaguars coach said after a 40-14 loss to Baltimore on Sunday, the team's 13th consecutive defeat. “The greatest gift we can all give to each other is the gift of winning a football game.”

With two weeks to go, there's no need to review each and every lopsided loss, especially this one. What's the point? Best to turn their attention to next week's matchup with the Chicago Bears— although the Jets' victory against the Rams put Jacksonville ahead in “the race” for the top overall draft pick.

Marrone has started three different quarterbacks, none with great success. Gardner Minshew got the chance to run the offense from the outset Sunday for the first time since October, and he experienced mixed results.

Minshew went 22 for 29 for 226 yards and two touchdowns, but was sacked five times and didn't impress Marrone enough to get the green light to start again next week.

“I'm not going to comment on that right now," Marrone said.

It's been tough for the coach to watch his players and coaches work hard during the week only to end up trudging to the locker room late Sunday afternoon.

“It’s tough," Marrone said. “When you see guys trying and giving everything they have, and here we are having lost all these games, I don’t think about myself. I think about these coaches and players."

Minshew probably realized it was going to be a long day when he was buried in the end zone for a safety on the Jaguars' second offensive play. It didn't get much better during a first half in which Jacksonville gained only 61 yards and trailed 26-0.

In the second half, with victory virtually impossible, the Jaguars set out to iron out the kinks one series at a time. They scored on their first possession of the third quarter, but the second march ended with a sack and a fumble at the Baltimore 14.

“We were just trying to score on that drive," Minshew said. “At halftime, we said we’re not going to look at this statistically, forget the score, we’re going to try to get little wins where we can. That’s what we tried to do in the second half.”

In the end, the Jaguars came out on the short end of another blowout.

Time to look ahead. Again. Why linger on this stinker of a game?

“We’re definitely going to try to put it behind us," Minshew said. “I think there’s an opportunity to learn from it, as there is with every game. But man, we have to move forward, find a sense of optimism and belief that we can go win these next two.”