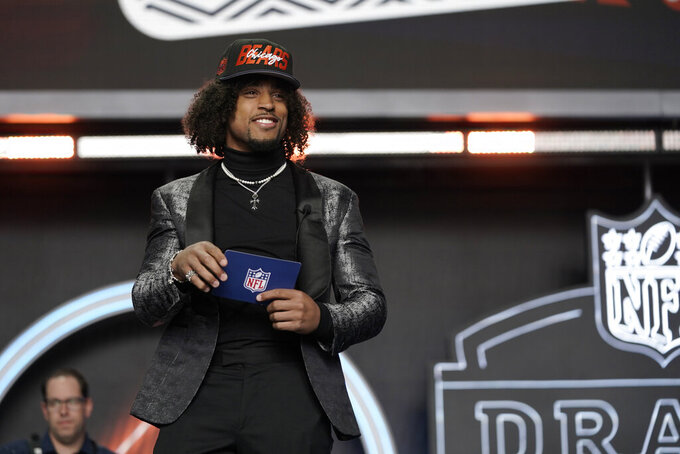 Washington cornerback Kyler Gordon smiles after being selected by the Chicago Bears during the second round of the NFL football draft Friday, April 29, 2022, in Las Vegas. (AP Photo/Jae C. Hong)

LAKE FOREST, Ill. (AP) — No one needed to remind new Chicago Bears general manager Ryan Poles that quarterback Justin Fields could use a few more weapons to help him develop and lift a struggling offense.

He just wasn't going to force the issue — not with his first couple picks.

The Bears addressed needs in the secondary with their first two draft picks under Poles, selecting Washington cornerback Kyler Gordon in the second round at No. 39 overall and Penn State safety Jaquan Brisker at No. 48 on Friday night.

The Bears got a potential starter opposite Jaylon Johnson by taking the athletic and hard-hitting Gordon. They opted to add to their defense again with their second pick by going with Brisker. Help for Fields came in the third round, when Chicago grabbed Tennessee receiver Velus Jones at No. 71.

Poles said all three players fit with the culture the Bears are trying to establish.

“They enhance it,” he said. “They’re passionate about football. They’re tough. They’re team-oriented. They communicate really well. They’re responsible, dependable. All of those things that we’ve talked about, that we look for.”

That the Bears chose defensive players with both second-round picks was somewhat surprising. But Poles went with value over need.

“I just think it would be a huge mistake to say, ‘Let’s just ignore the really good player over there and let's go over here and take someone just because we need that right now," he said. "I really feel like our whole group and myself were disciplined in following the board and we're excited about it.”

Chicago went 6-11 last season and missed the playoffs for the ninth time in 11 years. In the aftermath, chairman George McCaskey fired former GM Ryan Pace and coach Matt Nagy and replaced them with Poles and Matt Eberflus.

Poles has been reworking the roster, trading star pass rusher Khalil Mack to the Los Angeles Chargers. His most notable free agent signing was a three-year agreement with former Cincinnati Bengals defensive tackle Larry Ogunjobi that got wiped out because of a failed physical.

The Bears' offense ranked among the NFLs worst last season. The Monsters of the Midway had issues to address on defense in the draft, too, particularly in the backfield.

“I want you to know that when I come to Soldier Field and I’m there I just want it to be live and poppin.′ I want to interact with y’all," he said.

The son of a gymnastics coach, Gordon took up kung fu when he was 4. He started dancing a year later, started competing around the country and joined the Seattle Storm's hip-hop troupe when he was 9, all while setting a course in football that led to the NFL

Gordon was first-team, All-Pac-12 last season and formed an impressive duo at cornerback with Trent McDuffie, who went to Kansas City with the No. 21 pick. The Huskies finished 4-8 and were fifth in the Pac-12 North with a 3-6 mark in conference play.

Gordon had 46 tackles — two for loss — and two interceptions to go with a team-high seven pass breakups in 12 starts last season. But when he ran a 4.5 in the 40 at the NFL combine, the Bears got excited.

“We were like, ‘Uh oh, we may have a chance now,” scout Francis Saint Paul said. "He plays way faster than that time. And you see it all the time, there’s a lot of players that don’t run as fast as we’re all expecting but they play faster. And he has great play speed.”

Brisker, who's from Pittsburgh, spent two years at Lackawanna Community College before transferring to Penn State. He was a second-team All-American as a senior last season.

He had 64 tackles and 51/2 for loss to go with two interceptions and five pass breakups in 12 games despite a banged up shoulder. He opted out of the Outback Bowl loss to Arkansas to prepare for the draft.

Jones played two seasons at Tennessee after four years at USC. He had 807 yards and seven touchdown catches last season, and was the only player with only player in the nation with more than 800 yards receiving, 200 punt return yards and 600 kickoff return yards.

He's looking forward to catching passes from Fields and returning kicks in a city where Devin Hester set NFL records. But with his 25th birthday next month, he's not exactly a young player.

Jones shrugged that off, saying “age is nothing but a number." He said his most serious injury was a high ankle sprain. And with no tears or fractures, he has the body of “a 21-year-old.”

Chicago had no first-rounder after trading it to the New York Giants last year to move up for Fields. The Bears have two picks in the fifth round (148 and 150) and one of the sixth (186) on Saturday.