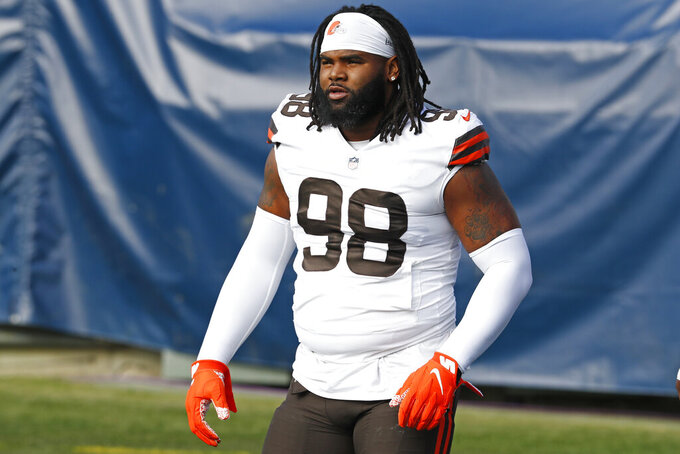 CLEVELAND (AP) — This off-season remodeling of the Browns' defense includes a surprising removal.

Veteran tackle Sheldon Richardson's contract was terminated on Friday, a head-scratching move that creates more salary-cap space but also a hole in the middle of Cleveland's defensive line.

Days after adding free agent end Jadeveon Clowney, the Browns parted with Richardson, who started 16 games last season and played well for the team since signing a three-year, $37 million contract with Cleveland in 2019.

The Browns will save around $12 million in cash and salary cap space with Richardson off the roster. Cleveland had roughly $10.3 million left under the cap after signing Clowney to an incentive-laden, one-year deal this week.

The Browns, who ended their long playoff drought last season, have some major financial decisions ahead with possible long-term contracts for quarterback Baker Mayfield, running back Nick Chubb and cornerback Denzel Ward on the table.

It's not yet known if the Browns asked Richardson to restructure his contract or if he'd be willing to re-sign for less money.

Shortly after the move was made official, Richardson posted a goodbye to Cleveland fans on his Instagram account.

“It was just starting to feel like home,” Richardson wrote as the caption to a photo of him on the field. “Dawg Pound I had a great time....#til next time.”

Richardson's loss leaves the Browns thin on the interior of their line as the team chose not to re-sign tackle Larry Ogunjobi this winter. The team signed veteran Malik Jackson to a one-year contract in free agency and is counting on Andrew Billings to return after he opted out in 2020. Jordan Elliott played sparingly as a rookie last season.

Primarily a run stopper, the 6-foot-3, 294-pound Richardson finished with 64 tackles and 4 1/2 sacks last year as the Browns earned a wild-card berth.

A first-round pick of the Jets, he was the AP Defensive Rookie of the Year in 2013. Richardson spent four seasons with New York and one each with Seattle and Minnesota before signing with the Browns.

The 30-year-old Richardson was solid against the run and considered a leader for the Browns' young defense. He was voted the team's Dino Lucarelli Good Guy Award winner by local writers in 2019 for his cooperation with the media.

Richardson's departure could mean the Browns will address their interior line depth in the upcoming NFL draft. Cleveland currently has the No. 26 overall pick.

started all 16 games and totaled 64 tackles, 4.5 sacks and one forced fumble. Initially a first round pick by the Jets in 2013, Richardson was voted the 2013 NFL Defensive Rookie of the Year, named a Pro Bowler in 2014 and was voted the winner of the 2019 PFWA Dino Lucarelli Good Guy award.