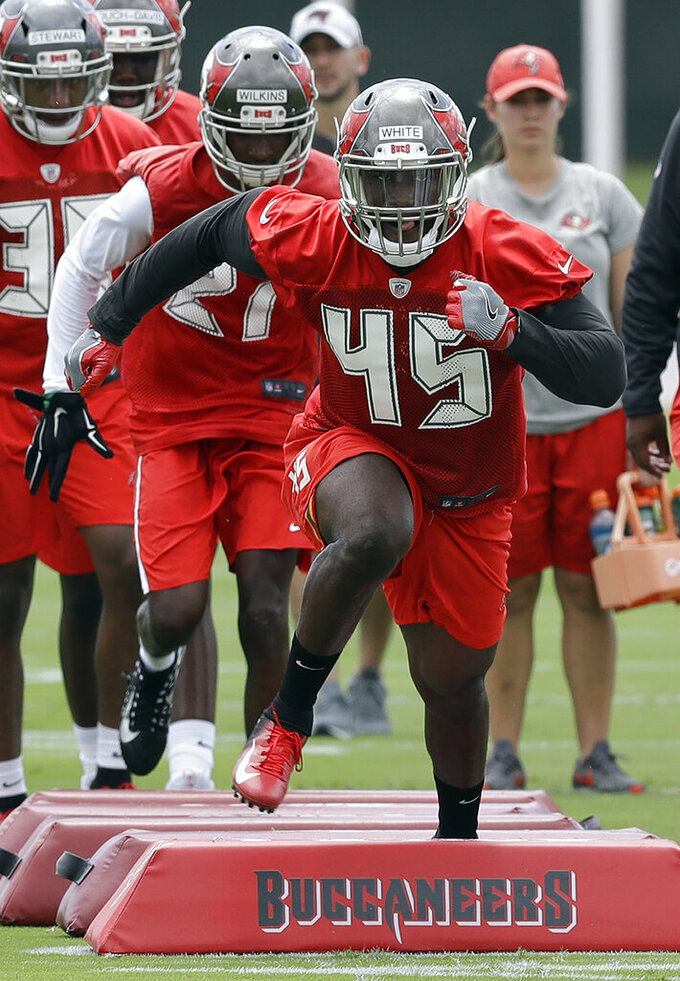 ST. PETERSBURG, Fla. (AP) — One of Devin White's first orders of business as the fifth overall pick in the NFL draft was selecting a new jersey number with the Tampa Bay Buccaneers.

The 2018 Butkus Award winner as the nation's top college linebacker wore No. 40 at LSU and was hoping to continue wearing it as a pro. Those plans changed when White learned No. 40 hasn't been worn by a Tampa Bay player since 2007, when fan favorite and Bucs Ring of Honor member Mike Alstott ended his career as the second-leading rusher in franchise history.

Although the jersey is not officially retired, White said he never considered seeking Alstott's permission to wear it.

"For all that he did for this place, him winning the Super Bowl, him really being a running back and not a fullback, him toting the rock like he did, he had his own legacy here, and I'm not a person who wants to step in the way of somebody else's legacy," White said Friday.

"Even though 40 means the world to me, at the end of the day it's not the number that's going to make me go out and make tackles, sacks and big plays," he added. "It's about me who's going to do that."

White wore No. 45 for the start of the team's three-day rookie minicamp, noting it combines his college jersey number and being the fifth overall pick.

The 6-foot-1, 240-pound inside linebacker said he's eager to create his own legacy as the leader of a defense that's making the transition to a 3-4 scheme for next season.

"Someday somebody may have to respect me that way," White said. "Hopefully if I put in enough work, I can get to his level someday."

With the exception of White dropping a potential interception that the linebacker likely would have been returned for a touchdown, coach Bruce Arians liked what he saw on the practice field.

"He jumped right out there and took control of the huddle," Arians said. "I think he'd like to have the pick-6 back. But other than that, he had a very good command of what he was doing."

As for White, he's just happy to be back in team meetings and practicing after spending most of the past four months preparing for the draft.

"The draft process was cool, but I really don't like all that attention. I like playing football. The minute I put my cleats on and walked out to this field, it was like heaven," he said.

The Bucs are counting on White to become an immediate starter, as well as a team leader on and off the field.

Second-round draft pick Sean Murphy-Bunting said the first-rounder is already setting the tone for a rookie class that includes six defensive players, a kicker and a wide receiver.

"He's definitely a leader," the cornerback out of Central Michigan said. "He takes over. He's a high-energy guy."

NOTES: There are 58 players on the rookie minicamp roster, including quarterbacks Nick Fitzgerald (Mississippi State) and Vincent Testaverde (Albany). ... Fitzgerald signed as a college free agent. Testaverde, son of former NFL quarterback Vinny Testaverde, was invited for a tryout. His dad began a long pro career with the Bucs as the No. 1 overall pick in the 1987 draft.