Chargers' defense finally rises to occasion when needed most 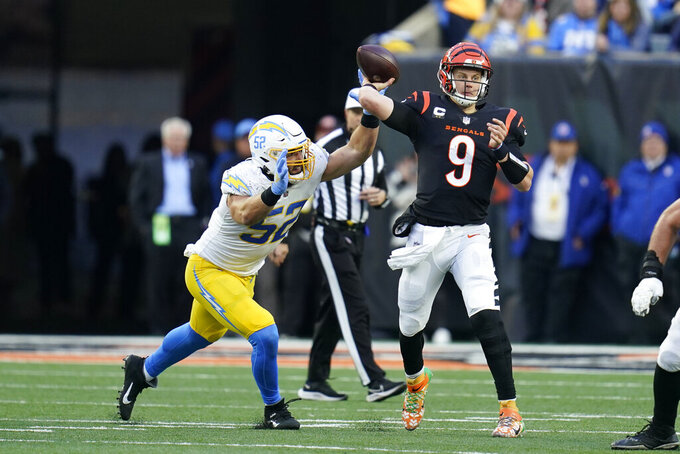 Chargers coach Brandon Staley said last week he was looking for that performance from which he could say the defense was the driving factor in a win.

He finally got that on Sunday against Cincinnati.

Los Angeles forced four turnovers, including a defensive touchdown, and sacked Joe Burrow six times in its 41-22 victory over the Bengals.

It is the first time since 2016 the Chargers have had at least six sacks. The four takeaways made for the second time that has happened this season.

“I felt like defensively, we really wanted to put on our performance down the home stretch when it’s crunch time, every game matters, and a game where the defense has to pull us out of the mud,” said linebacker Drue Tranquill, who tied for the team lead with 10 tackles. “It got highlighted at Denver when we weren't able to create those turnovers to swing the pendulum back to the offense's favor. I felt like we were able to do that yesterday.”

The Chargers bolted out to a 24-0 second-quarter lead, but the Bengals scored 22 straight points to make it a game early in the third quarter. Early in the fourth quarter, defensive tackle Christian Covington forced Joe Mixon's fumble and cornerback Tevaughn Campbell went 61 yards on the scoop-and-score return to put Los Angeles back up by more than one possession.

The beleaguered run defense, which came in allowing 145.3 yards per game, held Mixon to 54 yards after he rushed for 165 the week before against Pittsburgh.

Burrow was pressured 17 times according to Next-Gen stats, the most he has been under duress this season. It also tied for a season high by the Chargers.

Los Angeles will need similar efforts over the next couple weeks. It faces the New York Giants on Sunday, then has a short week to prepare for AFC West leader Kansas City on Dec. 16. The Chargers are 7-5, equaling their win total from last year, and currently have the second AFC wild-card spot.

“I’ve seen the improvement in our defense. There’s been some uneven times, as you guys know, but I’ve seen the improvement," Staley said to reporters. "Any time you force a fumble, score on defense and then in the power-red area get an interception, you’re going to have a great day. Our defense won the day for us ... because in that second half when it got tight, we had some really big stops. And then we finished the fourth quarter with a ‘bagel.’ I’m just really proud of our defensive staff and players.”

Those who were clamoring for Justin Herbert to throw deep more finally got their wish. He completed a career-high five passes in the air for 20 yards or more, which is only the fifth time since 2000 a Chargers quarterback has done that in a game. The last time was exactly 10 years ago by Philip Rivers on Dec. 5, 2011, against Jacksonville. Herbert has 19 completions on deep passes this season. He had 24 last year.

Austin Ekeler is second among NFL running backs in scrimmage yards (1,181) and total touchdowns (15), but he is tied for the lead with Washington's Antonio Gibson in lost fumbles with three. Ekeler coughed it up twice in a game for the first time in his five-year career on Sunday and the Bengals took advantage with a pair of touchdowns with a short field. The Chargers are without a consistent backup running back, and Ekeler is going to receive more carries the later it gets into the season.

OLB Uchenna Nwosu had a pair of sacks in a game for the first time in his four-year career, along with a strip sack and fumble recovery. The Chargers have forced a fumble on eight of their 27 sacks this season, tied for the league lead.

Ty Long’s net average on four punts was 36 yards, which included a touchback. Long and the Chargers' punt coverage team are last in the league with a 38.2 yard net average.

WR Keenan Allen was placed on the reserve/COVID-19 list Monday. Staley said “he’s day to day right now, and hopefully we’ll have some good news on him in the next few days.”

7 — receptions of at least 40 yards by Mike Williams, which leads the league. Williams had his third 100-yard game of the season with five catches for 110 yards, including receptions of 41 and 47 yards.

The Chargers begin a stretch in which three of their next four games are at home. They have a four-game winning streak against the Giants going into next Sunday's game before having a quick turnaround to face the Chiefs on Dec. 16 in what could be their last and best chance to vault into the AFC West lead.