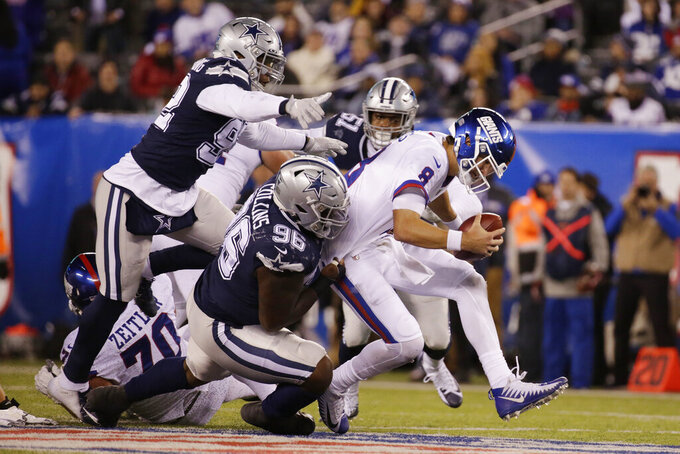 Luckily, the black cat making its primetime debut at MetLife Stadium didn't seem to be an omen. The cat not only found the end zone but found a way to escape Monday night, which is more than most members of the Giants can do before their season is mercifully over.

That's life midway through the NFL's 100th season, where a cat is more entertaining than both New York teams and the race for the bottom is a fight for future draft picks instead of the Lombardi trophy.

Things are even worse in Cincinnati, where the Bengals can't sniff a win and can't draw any fans. If parity is the goal in the NFL, the Bengals are among the perennially underperforming teams that have yet to get the memo.

Winning, the legendary Vince Lombardi so famously said, isn't everything. It's the only thing. But that's not always true these days in the NFL, where the money is huge for both owners and players whether they're chasing a Super Bowl or the basement of their division.

Increasingly, that's also true these days for fans. They can play daily fantasy or make bets in an increasing number of states that are more predicated on different spreads and statistical outcomes than they are on the idea of their team winning.

And that might be the biggest change in a season where the NFL has not only embraced its former nemesis — sports betting — but joined in promoting the fact its games are more fun to watch when there's a point spread involved.

"Not everybody bets but everybody is interested in whether or not their team is a favorite or a dog and by how much," former longtime NFL broadcaster Brent Musburger said. "It's helped fuel the league and it's only getting bigger and bigger now."

That can be seen in Las Vegas, where the betting handle keeps going up despite sports betting spreading to a dozen other states. It certainly can be seen in New Jersey, where fans sitting in the Meadowlands for the Monday night game were free to use their phones to bet on either the Giants or Cowboys — though not on the black cat scoring again.

And it will likely be seen in the television dollars that are the backbone of everything the NFL does. Dallas Cowboys owner Jerry Jones predicted on the eve of the season that legal sports betting will help the league increase its lucrative television contracts by 50% when they are up for renegotiation in 2022.

"Betting and wagering has been an integral part of the NFL for a long time through individuals, in various forms, making their wagers, my town against your town," Jones told Yahoo Finance. "But it's always to the benefit of the viewership. The viewership is where our numbers will increase. People will stay longer. That value is how our sport will benefit from gaming."

The betting effect is already showing with league TV ratings up 5% last year and up again this year — all at a time where TV ratings are on the decline elsewhere. There's still an enormous demand for the NFL that years of various controversies have failed to dent.

That's not entirely attributable to sports betting, but if you had a $10 parlay riding on the Cowboys and the over on the Monday night black cat game, you watched until the end of a badly played game to celebrate what would have been a meaningless fumble recovery for a touchdown with seconds left that caused the over to hit.

Yes, the NFL still has issues, and plenty of them. The league always has, but the popularity of the game is so strong that the NFL not only continues to survive but thrive.

Protests during the national anthem are, for the most part, gone, even while Colin Kaepernick continues to look for a job. Concussions remain a problem that will never really go away, though the pop-up medical tents now on the sidelines ensure that the immediate effects will remain hidden from prying cameras.

That the game has become almost unwatchable at times doesn't seem to matter. Instant replay has become as much of a problem as it is a solution, and flags are thrown so often that players automatically turn to look for the penalty whenever there is a long play.

Midway through the season there have been 1,938 penalties called, the most through nine weeks since 2005. There is an average of more than two penalties a game more than just 10 years ago, and the trend continues upward as officials try to control players who have gotten bigger and faster and harder to officiate.

Still, any billionaire worth his salt wants to buy a team. Any real fan wants to be part of the action.

And a lot of sports bettors couldn't be happier with the way this season is going.