Crackdown on taunting is working the way the NFL intended 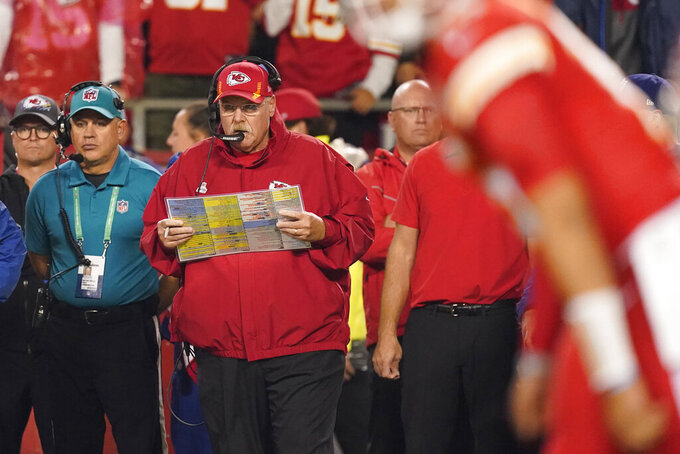 Kansas City Chiefs head coach Andy Reid watches from the sidelines during the first half of an NFL football game against the Buffalo Bills Sunday, Oct. 10, 2021, in Kansas City, Mo. (AP Photo/Charlie Riedel)

The NFL’s crackdown on unsportsmanlike penalties is working the way the league intended.

Officials threw 11 flags for taunting in the first two weeks of this season — the same number called in the entire 2020 season for the same foul — but only three over the next three weeks.

“We’re right where we need to be and we’re now seeing the correction we were looking for,” NFL executive Troy Vincent told The Associated Press. “We saw the spike the first three weeks and now we’re seeing the decline. The coaches and the NFL Competition Committee are pleased. Coaches have told us their players are adjusting, they're thinking about what they’re going to do, knowing it may cost the team. These are game-changing penalties for a selfish act.”

Week 6 kicked off with a taunting penalty occurring in an important moment during a prime-time game, adding to the widespread scrutiny over the rule. Players, media and fans have been critical. But the league has no plans to tell officials to back off because the goal is to eliminate foul actions that result from gesturing and in-your-face trash-talking.

After the Philadelphia Eagles rallied from a 21-point deficit against the defending Super Bowl champion Buccaneers to cut the score to 28-22 with 3:05 left in the fourth quarter Thursday night, the defense needed to stop Tom Brady and Tampa Bay's offense to give the ball back to Jalen Hurts and a rejuvenated offense.

On first down from the Buccaneers 25, Leonard Fournette gained only 2 yards but linebacker Genard Avery stared at him and went face to face with the running back as he stood up, drawing a flag for taunting. The 15-yard penalty gave the Buccaneers a first down and they eventually ran out the clock.

Avery’s transgression seemed mild, so the NFL drew even more criticism for making taunting calls a point of emphasis this season.

The league’s decision to emphasize these calls came directly from the NFL Competition Committee and the Coaches’ Subcommittee. Members from both groups include team owners, presidents, general managers and coaches, including Mike Tomlin, Ron Rivera and Andy Reid.

“The coaches felt over the last few years it had gotten out of control. We cannot move away from sportsmanship being the core of our game,” said Vincent, a six-time Pro Bowl cornerback who now serves as the league’s executive vice president of football operations. “Sportsmanship has always been the core. The rules are very clear. Don’t do it toward the opponent’s sideline or at the opponent. That doesn’t mean you can’t celebrate, you can’t have fun, you can’t have spontaneous actions. You can jump, flip, celebrate. You just can’t do it at an opponent. It leads to bad outcomes like players spitting at each other’s face, players throwing punches and fighting, players kicking and stomping one other. Make a play like a professional and get back in the huddle. You can have fun, but you cannot get in another player’s face. It leads to bad outcomes.”

Even though Avery’s actions weren’t over the top, the penalty was called according to the rule.

Eagles coach Nick Sirianni had no problem with the officials.

“Again, that was unacceptable and that falls on me first," he said. “I have to do a better job getting everybody doing the right things out there and keeping our composure out there.”

Fournette knew he couldn’t retaliate against Avery because officials are looking for unsportsmanlike behavior more than ever.

“Imagine if I would’ve said something back, (the penalty) could’ve went both ways and my team would’ve been looking at me crazy and the loss would’ve been on me,” he said.

Fournette acknowledged he may have engaged Avery if the Buccaneers were winning big but added: “In a critical moment like that, knowing we need this game, no.”