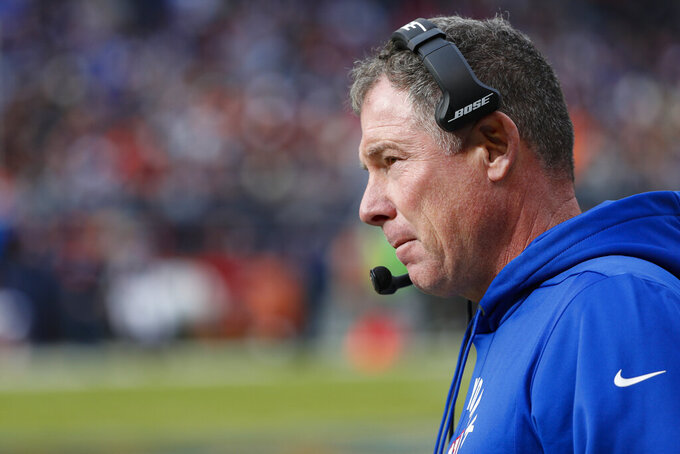 It was that kind of day for the New York Giants’ secondary, even with Mitchell Trubisky behind center for the Chicago Bears.

Daniel Jones threw a 23-yard touchdown pass to Golden Tate in the fourth quarter, but New York (2-9) dropped its seventh straight game with a 19-14 loss to Chicago on Sunday.

“Just have to go out there and figure out a way to finish games,” linebacker Alec Ogletree said. “I think that’s something that we just have to continue to learn and grow and eventually it’ll start going in our favor.”

Ogletree intercepted Trubisky in the end zone in the first quarter, stopping a promising drive for Chicago (5-6). Rookie safety Julian Love, who took on a more prominent role after Peppers got hurt, grabbed his first career interception on a horrible throw by Trubisky in the fourth.

But New York also had a lot of trouble with Trubisky, who threw for a season-high 278 yards after failing to crack 200 in his previous three games. Robinson had a season-best 131 yards on six catches after he managed just four receptions for 15 yards in last weekend’s 17-7 loss to the Los Angeles Rams.

Trubisky and Robinson also had a 60-yard play wiped out by a penalty on offensive lineman Cody Whitehair in the second quarter.

“They switched some things up, but we’ve got to be prepared,” said Love, who grew up in Chicago and played his college ball at Notre Dame.

Ballentine had a tough time trying to stay with Robinson, who beat the rookie cornerback for a 32-yard touchdown in the third. Ballentine tried to take the ball away near the goal line, but the veteran receiver just pulled him into the end zone.

“Instead of going for the ball, I should have made the tackle,” Ballentine said. “We have a really good red-zone defense that could have stopped them.”

It looked as if New York had stopped Chicago on the play before Robinson’s touchdown. Markus Golden sacked Trubisky on third down, but Jenkins was flagged for holding.

Ballentine also was beaten by Robinson for a 49-yard reception on Chicago’s next drive, setting up Eddy Piñeiro’s 24-yard field goal.

“I’ve just got to be more consistent in my alignment, my technique, and you know, just be closer to routes,” Ballentine said. “Play my game instead of trying to adjust to what they’re doing.”

It doesn’t get any easier for Ballentine and Co. Aaron Rodgers and the Green Bay Packers visit New York next weekend.

Peppers’ status is unclear after he got hurt on a kick return. He is scheduled for an MRI on Monday.

“Nobody is going to feel sorry for us, so don't feel sorry for yourself,” Peppers said of the Giants’ slide. “From man to a man we have to do something about it. Putting our head down and sobbing all day is not going to fix the issue. It starts with us.”