Many are outraged that teams didn't hire Bieniemy or Saleh 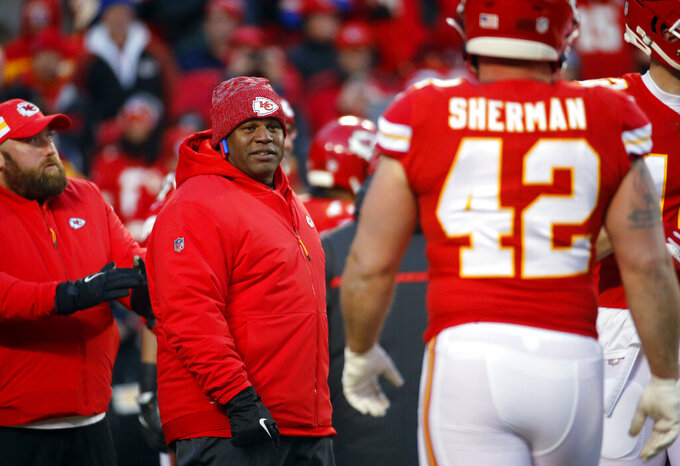 FILE - In this Jan. 20, 2019, file photo, Kansas City Chiefs offensive coordinator Eric Bieniemy watches players before the team's AFC championship NFL football game against the New England Patriots in Kansas City, Mo. The Chiefs have perhaps the most dynamic offense in the NFL and the San Francisco 49ers feature one of the stingiest defenses in the league. The men in charge of the units got interviews for head coaching but were passed over. (AP Photo/Charlie Riedel, File)

MIAMI (AP) — It's common for coordinators in the Super Bowl to have a head coaching position with a new team waiting for them after the game.

The Kansas City Chiefs have perhaps the most dynamic offense in the NFL and the San Francisco 49ers feature one of the stingiest defenses in the league. The men in charge of both units got interviews but were passed over.

Cleveland hired Kevin Stefanski, who was Minnesota's offensive coordinator, after Saleh's defense shut down the Vikings in a 27-10 win in the divisional round.

So when two minority candidates with obvious qualifications miss out on coaching jobs, many people question whether the NFL has a diversity issue.

There are just three African-American head coaches in the league and only one minority — Ron Rivera — was hired to fill one of the five vacancies this offseason.

"Clearly, we are not where we want to be on this level," NFL Commissioner Roger Goodell said Wednesday about the Rooney Rule. "It's clear we need to change and do something different. There's no reason to expect we're going to have a different outcome next year without those kinds of changes and we've already begun engaging in those changes."

Bieniemy and Saleh aren't complaining, though others are outraged for them.

"They also know and respect his mind," Reid said. "Every week, he and I sit down, and we put together this game-plan sheet with 200-plus plays on it. He memorizes every play, every formation. Just BA-boom, on recall, just like that. Every week, I go, 'Listen, are you good with this?' He goes, 'No problem, got it.' A lot of hard work goes into it. Plus, he is a brilliant dude."

Saleh inherited the worst defense in the league in 2017 and turned it into the No. 2 ranked defense this season.

"I just go about my business best I can," said Saleh, who is Lebanese-American. "Judge me for who I am, not for my ethnicity."

Hall of Fame running back Marshall Faulk put all the blame on the owners for the lack of diversity.

"I put more of the responsibility on you -- on the media because you're asking people who have no say in it," Sherman said. "You're asking players. We literally have no say in who gets hired, who gets fired. But the people who have say, we don't pressure. The owners, we don't call, we don't push to get them; when you have them in the media, nobody asks them the hard questions because you don't want to rub them the wrong way, you don't want to get on their bad side.

"So I almost say it's your fault that we don't have those answers, because none of you are asking the hard questions. Everybody feels comfortable asking a player a hard question about, 'Man, why aren't these black coaches getting jobs?' Ask the dudes who hire them. Ask the dudes who have all the power in the world to hire and fire these men. Then you'll get the answers. Or maybe we're not looking for the answers in those dudes, because we kinda know what they are."