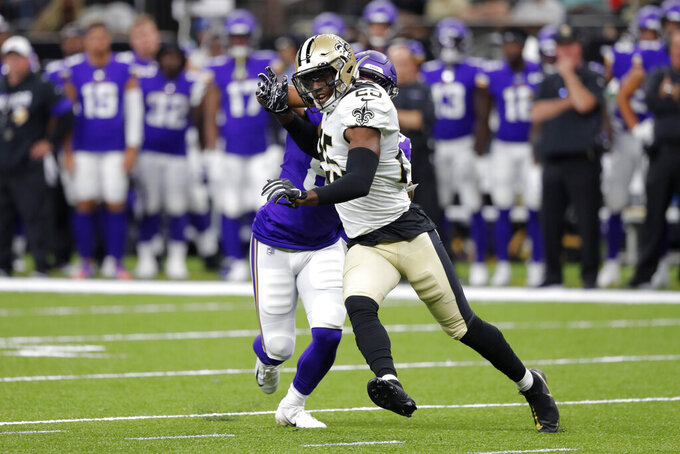 FILE - In this Aug. 9, 2019, photo, New Orleans Saints cornerback Eli Apple (25) shrugs off a block in the first half of an NFL preseason football game against the Minnesota Vikings in New Orleans. The Carolina Panthers have agreed to terms with free agent cornerback Apple. The move gives the Panthers the experienced cornerback they coveted after James Bradberry signed as a free agent with the Giants. (AP Photo/Bill Feig)

The move gives the Panthers the experienced cornerback they coveted after James Bradberry signed as a free agent with the Giants.

Apple has started 48 games during four seasons in the NFL and has 233 tackles, three interceptions and three forced fumbles but has never lived up to the billing of being the 10th overall selection in the 2016 draft out of Ohio State.

He started 15 games for the Saints last season and had 58 tackles and one forced fumble. He spent his first 2 1/2 seasons with the Giants before being traded midway through his third NFL season to the Saints.

Given Carolina's lack of experience at the cornerback position, Apple has a chance to start right away. Carolina returns 2018 second-round pick Donte Jackson from last year's team and drafted cornerbacks Troy Pride Jr. in the fourth round and Stantley Thomas-Oliver III in the seventh last month.