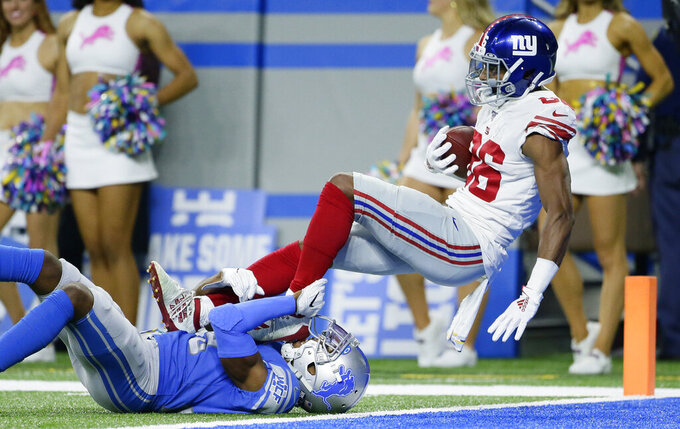 New York Giants wide receiver Darius Slayton (86) is tackled by Detroit Lions cornerback Rashaan Melvin after a 22-yard pass reception for a touchdown during the first half of an NFL football game, Sunday, Oct. 27, 2019, in Detroit. (AP Photo/Duane Burleson)

EAST RUTHERFORD, N.J. (AP) — When the second half of the season opens with a players-only meeting, there is a problem.

Pat Shurmur's team is riding a four-game losing streak after Sunday's 31-26 setback in Detroit and the players met Monday to discuss ways to right things after a 2-6 start.

"We got to do some soul-searching inside our building as a team and just figure out what it is and be part of the solution and not the problem," Saquon Barkley said after the game.

Neither Alec Ogletree nor rookie quarterback Daniel Jones would discuss what was said in the meeting.

"We've always been together," Ogletree said Monday. "It's only us that go out there on the field and play together, so it's just a matter of making sure everybody is still communicating, still on the same page, and trying to fix the problems."

The problems are glaring in a season that had a little hope after Jones replaced Eli Manning and led the Giants to back-to-back wins, evening their record at 2-2.

The hope is now diminished and the second half of the schedule is tougher.

Dallas (4-3) visits for a Monday night matchup before the Jets (1-6) host a rivalry game the following weekend.

Shurmur, who posted a 5-11 record in his first season as coach, had no problem with the players-only meeting. He says everyone is disappointed.

"We need to keep working, we have to be very intentional with how we do things, which we have been, but we have to find ways to get better at everything we do so that shows up on game day and we make more plays," Shurmur said.

The most pressing issue for the team is being ready to play from the start. New York has been outscored 38-0 in the first quarter during its losing streak.

Shurmur said the Giants have been finding ways to overcome the early deficits and get back into the game, but they are still not winning.

"But you're right, because what happens is you have to get away from some of the things that you had planned to do when the game was in the balance. You never want to do that," he said.

"I think we certainly came to work ready to fix things today, and I think we'll take that approach the whole week preparing to play Dallas," said Jones, who was 28 of 41 for 322 yards and four touchdowns.

The Giants don't give up. In their current skid, they have gone within a touchdown in the fourth quarter in three of the four games. They just haven't made the plays.

There is no consistency. Every week something different goes wrong, be it penalties or turnovers. Last week against Arizona, the offensive line allowed eight sacks. Jones was sacked three times this week, with two coming late. A week after giving up 156 yards rushing against the Cardinals, the Lions were limited to 59. However, Matthew Stafford was 25 of 32 for 342 yards and three touchdowns.

Darius Slayton. While losing WR Sterling Shepard to a concussion for a couple of weeks is not good, that has given Slayton the chance to play more. He had catches of 22 and 28 yards against the Lions and both went for touchdowns. Golden Tate continues to lead the wideouts, making eight catches for 85 yards.

Defensive coordinator James Bettcher. He has led the defense for 24 games since taking over last year. The unit is not close to being on the same page. The confusion in the secondary is a major concern. There are too many wide open receivers. The Lions had five passes of 20 yards or more, including touchdowns of 49 and 41 yards. New York has given up 13 pass plays of 30 or more yards this season. They allowed 19 last season.

Shepard is still in the concussion protocol. There were no injuries in the Lions game.

The team again fell behind by two touchdowns early and rallied to make it close before losing. That has to stop if the Giants are going to win. They must also fit recently acquired DL Leonard Williams into the mix.