Rams' Donald out to disrupt Brady, Buccaneers once again 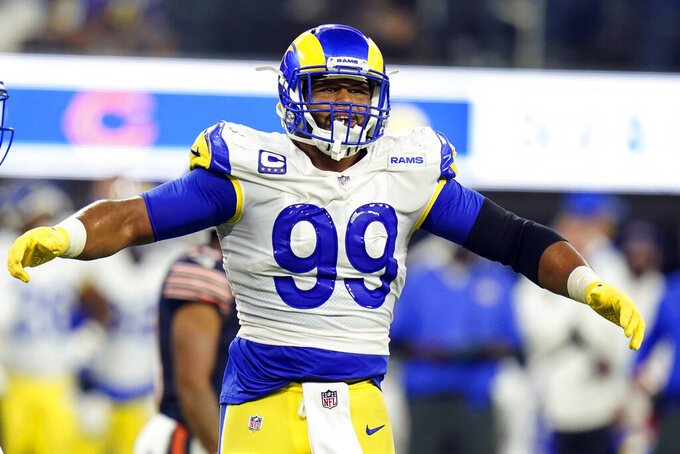 FILE- In this Sunday, Sept. 12, 2021, file photo, Los Angeles Rams defensive end Aaron Donald reacts during the second half of an NFL football game against the Chicago Bears in Inglewood, Calif. Donald's first game in his 30s looked like most of his dominant performances from his 20s with the Rams. (AP Photo/Jae C. Hong, File)

No tackles. No sacks. No hits, hurries or passes defended for the first time in the defensive tackle’s decorated career.

But it came at a price, as Donald’s presence and performance created opportunities elsewhere in the Los Angeles Rams’ 27-24 win.

“I just know he commands so much attention, whether it’s a double team, even a triple team sometimes, that opens things up for other guys. Other guys had really, really big games, and that’s a big credit to him,” safety Jordan Fuller said.

It was just the third time in 112 career games Donald did not record a tackle, something Buccaneers offensive coordinator Byron Leftwich doesn’t expect to be able to replicate this week when two of the top five betting favorites to win the Super Bowl square off.

“Obviously, you try to do things from a game-plan standpoint, but when you talk about a player of that caliber, you don’t know if we’re fortunate or lucky or what we try to do worked. Either way, none of that matters. None of that matters for Sunday,” he said.

Donald has one sack through two games this season, but the three-time AP Defensive Player of the Year remains as disruptive as ever. Indianapolis quarterback Carson Wentz can attest to that after being knocked out Sunday by Donald in the fourth quarter of the Rams’ 27-24 win.

Tom Brady has enjoyed remarkable longevity because of his ability to avoid those same kind of hits when scrambling, moving in the pocket, or holding onto the ball for too long. He was eventually able to mesh his desire to protect himself with Buccaneers coach Bruce Arians’ relentless desire to create big plays in the passing game, sparking their current 10-game winning streak and a Super Bowl title.

However, the Rams caught Brady before he was able to balance those often antithetical goals, and their relentless rush led to one of his worst games. Brady was 26-of-48 passing for 216 yards, one touchdown and two interceptions. He didn’t complete a throw longer than 18 yards and his 4.5 yards per attempt was a season low.

“We did a good job of putting pressure on him, guys just giving him different looks,” Donald said. “Did a great job covering things on the back end, and guys had opportunities to make plays, get the ball in their hands, and took advantage of it.”

“I can tell you for one thing, I know opposing offenses fear him. And, I mean, I know that for a fact,” Fuller said. “He wrecks the whole game. And just having a force like that in the middle of the defense, it’s special. We’re really lucky to have him, but I know it poses a big problem for whoever we play.”

Donald is on the verge of becoming the Rams' career leader in sacks. He needs 1 1/2 to pass Leonard Little's mark of 87 1/2, which goes back to when sacks became an official statistic in 1982 and therefore doesn't reflect Deacon Jones' prodigious ability for bringing down the quarterback.

Bringing down Brady multiple times would be a fitting way to claim the record, but Donald has no preference in which passer is on the receiving end of that or any other hit.

“Every quarterback I’m eager to sack," he said.

NOTES: Coach Sean McVay attended a walkthrough and practice Thursday after missing Wednesday’s sessions because of a stomach bug. "I just didn’t want to leave any of our players susceptible to it, but I was here working out of my office,” he said. … OLB Leonard Floyd (ankle) and RB Darrell Henderson (ribs) missed practice for the second straight day. McVay said the Rams would be cautious with Floyd’s “nagging” injury to prevent it from lingering throughout the season.