Tight end position has undergone quite an evolution in NFL 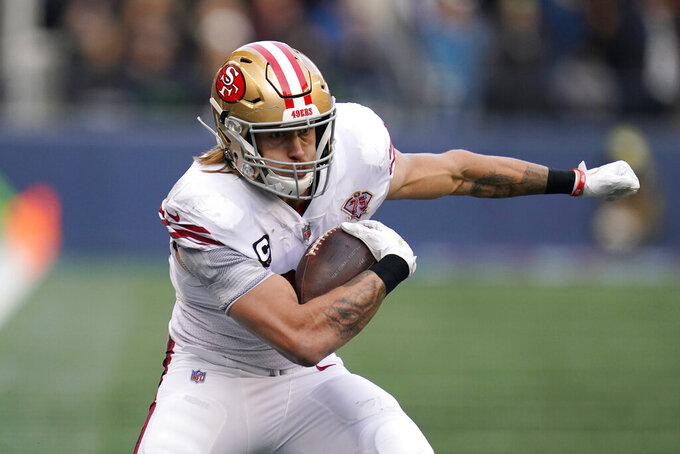 FILE - San Francisco 49ers tight end George Kittle carries the ball against the Seattle Seahawks during the first half of an NFL football game Dec. 5, 2021, in Seattle. No position in the NFL has undergone more changes to the style of player over the years than tight end. Long gone are the days of the blocking specialists who serve mainly as an extra offensive lineman. While guys like Rob Gronkowski, Travis Kelce and Kittle are excellent run-blockers, they are also outstanding receivers and major weapons on offense. (AP Photo/Elaine Thompson, File)

No position in the NFL has undergone more changes to the style of player over the years than tight end.

Long gone are the days of the blocking specialists who serve mainly as an extra offensive lineman. While guys such as Rob Gronkowski, George Kittle and Travis Kelce are excellent run-blockers, they’re outstanding receivers and major playmakers on offense.

“If you go back to the 70s, 80s and maybe even early 90s, the tight end was always an afterthought, the safety valve, the quarterback’s third option,” said agent Jack Bechta, who represents Kittle, the highest-paid tight end in league history. “Tight ends were never the feature of an offense or never the go-to guy in crucial situations. Now, the pendulum is kind of swinging the other way. I think you have to give credit to what the Saints did with Jimmy Graham, taking a basketball player and getting a very superior athletic guy and just torching safeties. Nobody tries to cover a tight end with a linebacker anymore. Before, that was the norm.

“The evolution of the position has become more valuable, more dynamic, more athletic and now it’s a must-have. It’s not the appetizer to the meal. It’s a must-have.”

Finding hybrid guys such as Pitts is rare.

Most draft analysts don’t anticipate a tight end going in the first round this week.

“I think it’s a pretty good tight end draft,” NFL Network’s Daniel Jeremiah said. “There’s no Kyle Pitts, but there is a ton of depth.”

Only nine tight ends have been selected in the first round over the past decade and four of the 10 first rounds saw none taken. Pitts and Detroit’s T.J. Hockenson (No. 8 in 2019) were among the exceptions. Noah Fant was picked 20th overall by Denver in 2019 and he was part of the trade to Seattle for Russell Wilson.

Most of the NFL’s prolific receiving tight ends were drafted after the first round.

Gronkowski, Zach Ertz, Hunter Henry, Dallas Goedert and Mike Gesicki were second-rounders. Kelce and Mark Andrews went in the third, Kittle in the fifth, Dalton Schultz in the fourth and Darren Waller in the sixth.

“I think you want guys that are dynamic but it’s also sure nice to be able to put your hand in the ground and be a friend to the running back and not just the quarterback,” Jeremiah said.

“If you go and look at the top tight ends in the NFL and for the most part look at their production with guys like George Kittle, it’s a traits-over-production position right now. You’re trying to find guys that have the ability to do those things. You don’t necessarily need to have seen them do it, but they need to have that ability.”

Colorado State’s Trey McBride is widely considered the top tight end in the upcoming draft and most boards expect him to go in the second round. Experts say he has good hands but isn’t a dynamic runner after the catch and his blocking is only solid.

Ruckert only got 42 targets because Ohio State had two likely first-round receivers in Garrett Wilson and Chris Olave.

“He’s kind of a good, true wide tight end, hand-in-the-ground, not real flashy, not real explosive, but he can help you out in the run game and he’s a reliable pass catcher,” Jeremiah said. “I gave him a grade that kind of puts him in that fourth-round range for this draft.”

With Gronkowski undecided about returning and O.J. Howard, a first-round pick in 2017, gone to Buffalo, Tampa Bay might be considering a tight end.