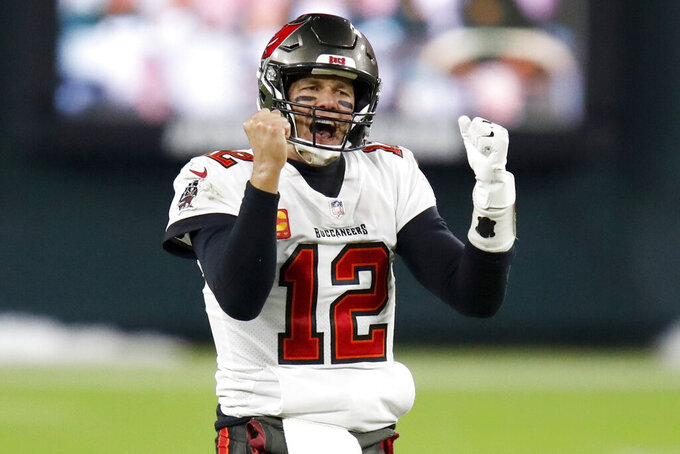 FILE - In this Sunday, Jan. 24, 2021, file photo, Tampa Bay Buccaneers quarterback Tom Brady reacts after winning the NFC championship NFL football game against the Green Bay Packers in Green Bay, Wis. The Super Bowl matchup features the most accomplished quarterback ever to play the game who is still thriving at age 43 in Brady against the young gun who is rewriting record books at age 25. (AP Photo/Matt Ludtke, File)

When a baby-faced Tom Brady made his first trip to the Super Bowl 19 years ago, Kurt Warner served up the main headline at media day by revealing he wanted to be remembered as the first quarterback to win five Super Bowls.

That was one more than Terry Bradshaw and Joe Montana.

It was also four more than Warner had, but the St. Louis Rams’ QB and engineer of the “Greatest Show on Turf” insisted at the time that it wasn’t a pipe dream.

“Is it realistic? I believe it is," he mused that day inside the Superdome in New Orleans. "I believe every time I step on the field I can win and we can go to the Super Bowl.”

As it turned out, there was indeed a swashbuckling quarterback in Super Bowl 36 that would go on to amass an unparalleled playoff resume and an unmatched collection of rings.

Brady began his run as the most successful QB in NFL history by leading the two-touchdown underdog Patriots to a 20-17 win over Rams that weekend.

Warner went into broadcasting and entered the Pro Football Hall of Fame having never hoisted a second Lombardi Trophy.

Brady is shooting for his seventh ring when he leads the Buccaneers (14-5) against the reigning champion Chiefs (16-2) in Super Bowl 55 on Sunday. Brady's postseason record includes a 33-11 mark, 14 conference championship appearances and 10 trips to the Super Bowl. He's beaten 27 quarterbacks in the playoffs, including Byron Leftwich, his current offensive coordinator and former Jaguars QB whom he got the better of in the 2006 wild-card round.

The long list also includes Patrick Mahomes, whom Brady edged 37-31 in overtime of the AFC championship two years ago on his way to his sixth and final Super Bowl parade with the Patriots. After that game, Brady visited Mahomes in the Chiefs locker room to console the young quarterback and assure him he’d have many more chances to get to the Super Bowl.

Mahomes made it last year and led KC to its first championship in half a century. He's guided the Chiefs to the cusp of the NFL's first back-to-back championships since Brady did it following the 2003 and '04 seasons.

If the Bucs dethrone the champs, Mahomes would become the sixth quarterback Brady has beaten multiple times in the playoffs.

Brady went 3-0 against Philip Rivers, 2-0 against two-time champion Ben Roethlisberger, and 2-0 against Andrew Luck. He was 2-2 against Joe Flacco and 2-3 against Peyton Manning.

He lost both of his Super Bowl matchups with Eli Manning, meaning that he might have been going for his 12th ring Sunday — two for the toes? — were it not for Archie Manning's sons.

The only other QBs to beat Brady in the playoffs and never lose to him were Jake Plummer, Mark Sanchez, Ryan Tannehill, and Nick Foles in Super Bowl 52, when Brady threw for a Super Bowl-record 505 yards with three TDs.

Brady added three victims to his list last month: Washington’s Taylor Heinicke and fellow quarterback icons Drew Brees and Aaron Rodgers, who are among the dozen Super Bowl winners Brady has beaten in the playoffs.

Rodgers is one of six NFL MVPs that Brady has beaten in the postseason, a list that includes Peyton Manning, who’s one of four No. 1 overall draft picks who have bowed to Brady's teams in the playoffs. The others are Luck, Jared Goff and Alex Smith.

A seventh title for Brady would break the record for NFL championships he shares with three members of Vince Lombardi’s great Packers teams of the 1960s: Herb Adderley, Fuzzy Thurston and Forrest Gregg.

If he loses, Brady would have his fourth loss in the big game, one shy of the ignominious mark held by O-lineman Glenn Parker, linebacker Cornelius Bennett and backup QB Gale Gilbert, all of whom lost four Super Bowls with the Buffalo Bills in the 1990s.

Although he’s not showing his age, 43, Brady will be the oldest to play in a Super Bowl, displacing Colts kicker Matt Stover, who was 42 in Super Bowl 44. This week Brady even spoke about playing beyond age 45, although he's not really looking ahead.

Nor is he looking back.

He's determined to lead this team to this title. That, he said, “would make for a really magical season for us.”

Many believe Mahomes, the first quarterback to reach two Super Bowls before age 25, is Brady's heir and will rule football in the years ahead. Swiping the baton from him this weekend certainly would help in that regard. That would keep Brady at six and within Mahomes' sights.

Asked on Zoom this week if he'd thought about that, Mahomes leaned closer to the screen and smiled. Unlike Warner, he wasn't going to get ahead of himself and talk about anything but the Super Bowl title in front of him.

“I’m trying to find a way to repeat, find a way to win a second championship and find a way to do whatever I can to win with this team," Mahomes said. "You don’t get these opportunities every single year ... so you don’t want to look back and have regrets.”