Vita Vea disappears and so does Dwayne Haskins 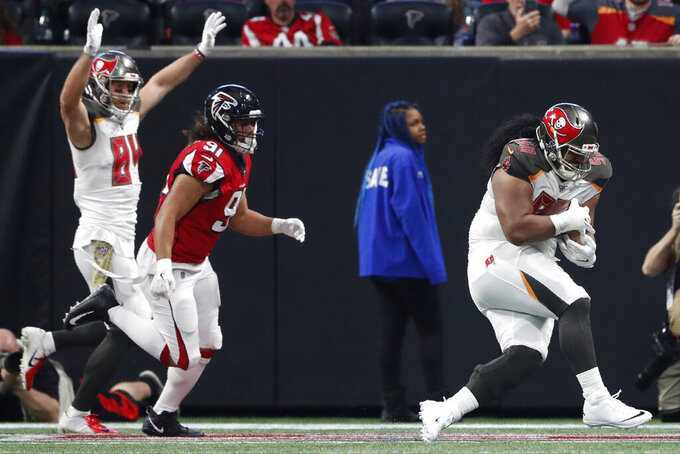 Tampa Bay Buccaneers defensive tackle Vita Vea (50) runs into the end zone for a touchdown against the Atlanta Falcons during the first half of an NFL football game, Sunday, Nov. 24, 2019, in Atlanta. (AP Photo/John Bazemore)

In the 12th week of the NFL’s centennial celebration, 347-pound Vita Vea disappeared, and so did Dwayne Haskins.

Sure, the cream team in each conference had statement-stamping victories — the 49ers established their bona fides by handing Aaron Rodgers a beating the likes of which he hadn't felt since the 2015 Broncos bamboozled him on their way to winning Super Bowl 50, when Denver's defense carried a post-prime Peyton Manning across the finish line.

It appears the pesky Patriots defense is doing the same thing for 42-year-old Tom Brady, something that was demonstrated anew in New England's 13-9 grind-it-out win over the confounding Dallas Cowboys on a rain-soaked Sunday night in Foxborough.

The weekend’s truly memorable moments, though, belonged to Vea, the Buccaneers’ beefy second-year defensive tackle, and Haskins, the raw rookie quarterback who ignited a debate over whether his selfie was selfish.

Tampa Bay wideouts Mike Evans and Chris Godwin each surpassed 1,000 yards receiving in a 35-22 win over Atlanta as Jameis Winston led the Buccaneers out of the NFC South basement with his sixth consecutive 300-yard game.

What else was kind of cool was watching coach Bruce Arians reach into his bag of tricks to line up Vea as a blocker in the offensive backfield on second-and-goal from the Atlanta 1-yard line.

Vea had never caught a pass or run the ball in college or the pros. So, the Falcons ignored him as he lined up at the 5 and slipped into the end zone untouched and uncovered and easily hauled in Winston’s TD toss that gave the Bucs a nine-point halftime lead on their way to a 28-16 victory.

As AP's Fred Goodall wrote, "Expect to see Vita Vea, the 6-foot-4, 347-pound defensive tackle who had a sack and also caught a 1-yard TD pass against Atlanta, continue to be used in goal-line situations on offense. Three weeks ago, he wiped out three defenders with a block that opened a huge hole on a rushing TD against Arizona, creating the prospect for an even bigger role against the Falcons.”

"It's always nice to get those (big) guys the ball. But they earn it by blocking," Arians said.

Usually a quarterback getting his first NFL win will keep the football tucked tight after taking a knee in victory formation.

Haskins couldn't do that Sunday in the Redskins' 19-16 comeback win over Detroit because he wasn't on the field at the end of his inaugural win as a pro. He was posing for a selfie with a fan in the front row while Case Keenum took a knee as the Redskins (2-9) worked off the final seconds.

"I look up and we were in victory (formation) and said, ‘Oh, I thought the game was over with already,'" Haskins said. "But I'll get it next time.”

Dustin Hopkins connected on a 39-yard field goal with 16 seconds left for the winning margin, and Lions fill-in quarterback Jeff Driskel threw his third interception, this one to cornerback Fabian Moreau, giving the Redskins the ball back with two seconds left.

"We were looking for him," interim coach Bill Callahan said. "I think he thought the game was over."

So, Keenum did the honors, taking a knee to seal the rookie's first career win while putting the minus 1-yard rush on his own stat line.

Former Redskins QB Joe Theismann found nothing funny about Haskins' gaffe, tweeting, "How do (you) miss the last snap of a game because ur taking selfies. That’s unprofessional & wrong."

Another object of ire on the airwaves and social media alike was Cowboys coach Jason Garrett, who settled for Dallas' third field goal when trailing by seven in a driving rain at Foxborough with six minutes remaining.

Garrett explained he wanted to keep his team within one score in case the Patriots answered with a field goal of their own.

Dallas was down a touchdown, so Brett Maher’s short field goal on fourth-and-7 from the Patriots 11 got them within four.

So, when they got the ball back after a New England punt, they still needed a touchdown to beat Tom Brady and Bill Belichick.

In a driving rain.

Against the NFL's top defense.

They reached their own 25.

And lost by four.