Watt to return for Texans in playoffs against Buffalo 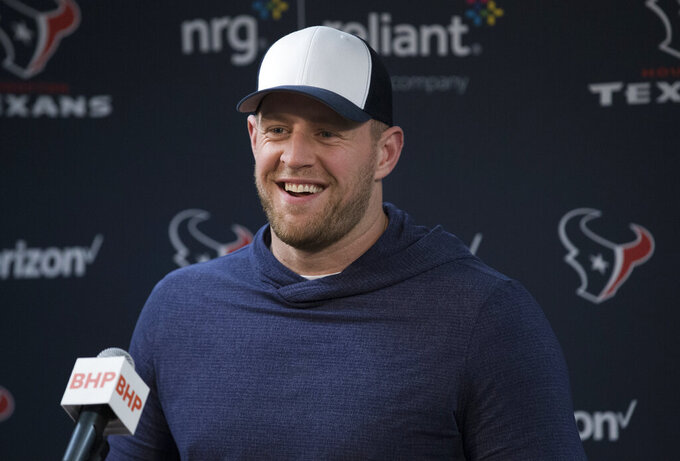 Houston Texans J.J. Watt speaks during a press conference on Tuesday, Dec. 24, 2019, in Houston. Watt will return to practice with the Houston Texans on Tuesday, clearing the way for the star defensive end to play in the team's playoff game in two weeks. (Yi-Chin Lee/Houston Chronicle via AP)

HOUSTON (AP) — J.J. Watt was a rookie in the 2011 playoffs when his spectacular performance against the Cincinnati Bengals led the Houston Texans to the first postseason win in franchise history.

The spotlight will be on Watt again on Saturday, when he'll return to the field a little more than two months after surgery to repair a torn pectoral muscle when the Texans host the Buffalo Bills in the first round of the playoffs.

Watt had a good first season in the NFL but was relatively unknown nationally when he made his playoff debut against Cincinnati. The game was tied at 10-all in the second quarter when Watt tipped a pass from Andy Dalton and grabbed it for an interception, which he returned 29 yards for a touchdown to put Houston on top for good. The defensive end also had four tackles, a sack and a quarterback hit in the 31-10 victory.

Watt recalled that game this week and said the energy and atmosphere in the stadium that day was incredible.

"As a guy who's been here for nine years, that feeling is what I want to capture and magnify," he said. “I feel like, not that we haven't had that (since), but there was something magical about that and I want to create that magic again. The only way to do that is by winning. There's no special sauce. You just have to win.”

After sitting out since October, it's unclear how much impact Watt will have on the game. But coach Bill O'Brien said Thursday that Watt would play "quite a bit," which should help a pass rush that ranked 26th in the NFL with just 31 sacks.

Watt and the Texans will face an offense led by Josh Allen, who will make his playoff debut after finishing the regular season with 3,089 yards passing with 20 touchdowns and 510 yards rushing and nine more scores.

"(It's) still the game of football, the dimensions are the same, we have the same plays that we've had in all year," Allen said. "We're not trying to do anything different ... we got to go out there and execute."

The Bills have lost five straight playoff games since a 37-22 win over Miami in a wild-card game on Dec. 30, 1995. The Jim Kelly-led team followed with a 40-21 loss at Pittsburgh the next week.

Buffalo's playoff-victory drought is the third longest active streak in the NFL.

The Cincinnati Bengals haven't won a playoff game since January 1991. The Detroit Lions have the second-longest streak, with their last win coming in January 1992.

Members of Buffalo's 1990 teams, who made and lost four consecutive Super Bowl appearances, are rooting for the Bills to finally break the streak.

"We're all about these guys. We love them. We think they're great," former Bills receiver and special teams star Steve Tasker said, noting he was speaking for numerous teammates. "The culture and feel around the building reminds us of us."

Houston quarterback Deshaun Watson is looking for his first playoff win after struggling in his playoff debut last season, a 21-7 loss to the Colts.

"We earned this opportunity and it's real dope," he said. “No one in our locker room wants it to end and we'll continue to keep working and keep fighting forward to try to improve and get to the next week.”

Though Watson is only in his third season, he's the undisputed leader of the offense and has worked this week to make sure his teammates are focused. Running back Carlos Hyde said Watson sent a group text to the players on offense with the simple message of “let's be great.”

Bills cornerback Kevin Johnson and rookie defensive tackle Ed Oliver have ties to Houston. Johnson spent his first four seasons with the Texans after being selected with the 16th pick in the 2015 draft. Oliver, Buffalo's first-round pick, grew up and spent his three-year college career at Houston.

Oliver shrugged off questions about his homecoming, saying, “The most exciting part besides playing Houston is (it's) my first playoff game.”

He's treating it like any other road game despite having family and friends in the stands.

"Doesn't matter where we play," Oliver said. "My fans and people can't come down on the field and help me play."

As for Johnson, the backup has the chance to get additional playing time with starter Levi Wallace's status uncertain due to an injured right ankle.

Johnson said he's focused on the outcome and not holding a grudge against the team that cut him last offseason.

"It's a good opportunity and the goal is to win the game," he said. "That's what my focus is."

By The Associated Press 34 minutes ago
By Will Graves 2 hrs ago
By Dennis Waszak Jr. 4 hrs ago
By Steven Wine 5 hrs ago
By Beth Harris 6 hrs ago