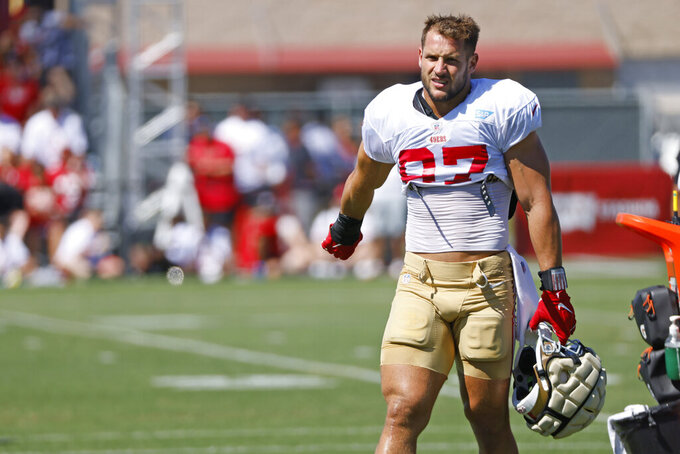 STRENGTHS: Defensive line. Coach Kyle Shanahan and GM John Lynch have made the defensive line a priority ever since arriving in San Francisco in 2017 and the roster reflects that. Led by edge rusher Nick Bosa, the Niners have one of the deepest units in the league with Arik Armstead leading the group inside and Samson Ebukam and rookie Jackson providing support for Bosa on the edge.

WEAKNESSES: Interior offensive line. While Trent Williams was an All-Pro at left tackle last season and Mike McGlinchey is solid on the right side, the Niners have serious questions on the interior after losing LG Laken Tomlinson in free agency and C Alex Mack to retirement. Jake Brendel, who has started three games since entering the NFL in 2016, has won the job at center and last year's second-round pick Aaron Banks will start at left guard after barely playing as a rookie. Burford, a fourth-round pick out of Texas-San Antonio, will play left guard but all three spots are question marks.

CAMP DEVELOPMENT: The Niners started camp with veteran Darqueze Dennard having the inside track to replace K'Waun Williams at slot cornerback but fifth-round rookie Womack seized the job and Dennard was released.

FANTASY PLAYER TO WATCH: WR Brandon Aiyuk. After starting last season in Shanahan's dog house, Aiyuk found his form late with 47 catches for 730 yards over the final 11 games. Aiyuk spent the offseason working closely with new starting QB Trey Lance and the results have been positive on the practice field. Aiyuk has been Lance's favorite target and could be in line for a big season as a wideout, especially if the versatile Deebo Samuel is still getting time as a running back.

EXPECTATIONS: The Niners are counting on Lance to make a seamless transition as starting quarterback and expect that will make them contenders again in the NFC. While his performance in the summer has been inconsistent at times, the 49ers remain confident the player they traded three first-round picks to draft at No. 3 overall in 2021, will ultimately be an upgrade over Jimmy Garoppolo thanks to his running ability and stronger arm. The team is filled with stars supporting Lance with Samuel one of the most dynamic playmakers in the game, George Kittle one of the top tight ends and Williams the best left tackle in the league last season. The defense has Bosa, Armstead, LB Fred Warner and new CB Charvarius Ward leading the way. If Lance can be a slight upgrade on Garoppolo, San Francisco should be one of the top teams in the conference. If he struggles in his first full season since 2019 at North Dakota State, it could be a long season.