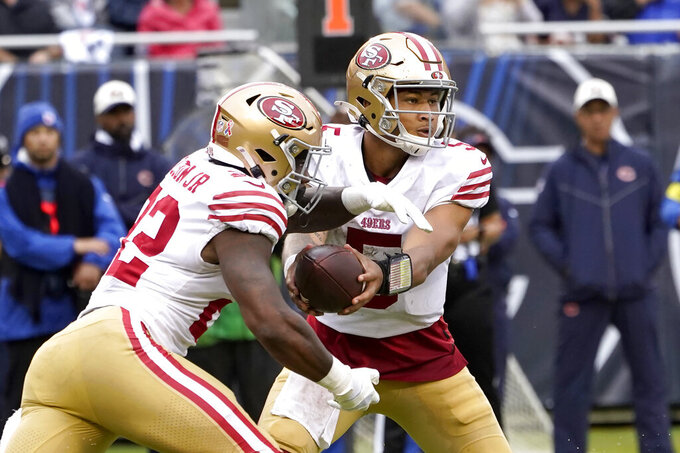 FILE - San Francisco 49ers quarterback Trey Lance hands off to running back Jeff Wilson Jr. during the team's NFL football game against the Chicago Bears on Sept. 11, 2022, in Chicago. The 49ers find themselves in a frustrating but familiar familiar spot: a starting running back has gotten hurt forcing the team to scramble for a solution. The Next man up after Elijah Mitchell went down with a knee injury that is expected to sideline him for about two months is Jeff Wilson Jr. (AP Photo/Charles Rex Arbogast, File)

SANTA CLARA, Calif. (AP) — The San Francisco 49ers find themselves in a frustrating but familiar spot: a starting running back has gotten injured, forcing the team to scramble for a solution.

Next man up after Elijah Mitchell went down with a knee injury that is expected to sideline him for about two months is Jeff Wilson Jr.

Since coach Kyle Shanahan arrived in 2017, the Niners have had a different leading rusher every season, with Carlos Hyde doing it the first year, followed by Matt Breida, Raheem Mostert, Wilson and then Mitchell.

The past four of those seasons, the leading rusher was a player who didn’t open the season as starter as injuries have usually forced changes along the way.

Wilson has spent most of his time in San Francisco since joining the team as an undrafted rookie in 2018 in a reserve role. But in the few instances when he has gotten the chance to play, he has delivered.

Wilson has started nine games at running back over the past four years, averaging 81.2 yards rushing in those games and scoring eight TDs.

“Jeff is just such a good football player,” Shanahan said. “Anything that we ask him to do, he does. Whether it’s our third-down back, whether it’s playing the fullback role when our wideouts have the ball. He's been a starter for us. He's just a very reliable guy. When Jeff’s healthy and able to stay fresh, he can play at a high level. He’s one of the guys that we trust as much as anyone around here.”

Wilson is healthy after a frustrating 2021 season when he suffered a freak knee injury during the offseason program while getting out of his chair. He only played nine games.

But he said he never felt fully healthy, even after returning.

“It was just a rollercoaster ride last year,” he said. “I just kind of tried to stay in my seatbelt and take the thrill. Just go along with the hoops, the turns and the curves. But I feel way better than I did last year.”

The Niners added a veteran to the mix this week when they signed Marlon Mack to the practice squad, and also have two untested rookies looking for an opportunity.

Third-round pick Tyrion Davis-Price was a healthy scratch in the opener but could get a chance this week to see action. Undrafted rookie Jordan Mason only played on special teams in Week 1.

Shanahan said he likes how both rookies run the ball but they need to improve on what they do when the ball is not in their hands, mentioning aspects like blocking and making sure they are lined up properly.

Their teammates are confident both can succeed if called upon.

“I think both the guys are extremely talented,” fullback Kyle Juszczyk said. “That’s the reason they made this team. Do they need to grow? Yes. I think any rookie does at this stage. They’re going to grow up fast. The best way to learn and the best way to get experience is to go out there and play. I think they’re going to get that opportunity here in the next couple of weeks. And I think there’s a lot of good things coming from both of them.”

NOTES: TE George Kittle (groin) and OL Daniel Brunskill (hamstring) missed practice. Shanahan said Kittle has improved and there's a chance he could play this week after missing the opener. ... DE Jordan Willis went on IR with a knee injury and DL Kemoko Turay was promoted from the practice squad to take his place on the roster. ... The Niners signed RB Marlon Mack, WR Willie Snead and CB Kary Vincent Jr. to the practice squad.