49ers use physicality to win 5 out of 6 games 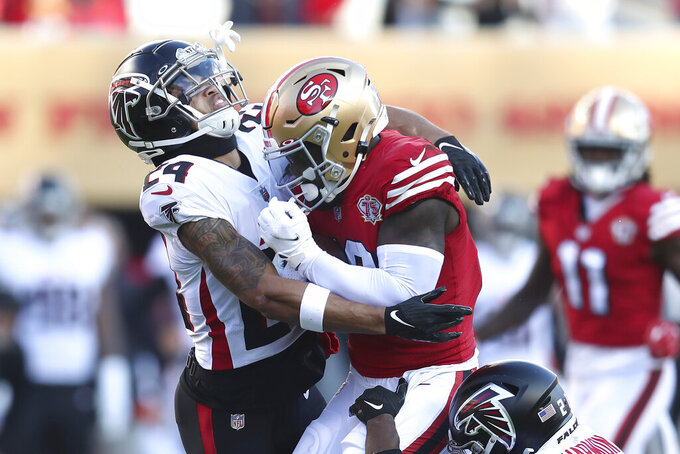 SANTA CLARA, Calif. (AP) — When Kyle Juszczyk scored San Francisco's first touchdown of the game, he ran through a gaping hole created when Trent Williams flattened yet another defender with one of his vintage blocks.

That was one of the many physical, tone-setting plays from the 49ers in their 31-13 win over the Atlanta Falcons on Sunday.

There was receiver Deebo Samuel knocking the mouthpiece from a defender with a big hit downfield, Williams delivering pancake blocks or Nick Bosa throwing aside defenders on the way to the quarterback.

“We feed on that big time," Juszczyk said. “I know personally, I do. I saw a lot of flexing out there and that got me hyped today and it definitely is a trickledown effect to everybody. I do think that has helped us, it has kind of been the catalyst for our offense.”

The Niners have won five out of six games with a consistent formula to get into playoff position in the NFC. They have the fifth-most yards rushing per game (144.7) and fourth-most sacks (18) in the NFL over that span.

The most memorable of the physical plays might have come in the third quarter when Samuel caught a 21-yard pass over the middle and delivered such a hard hit that Atlanta defensive back A.J. Terrell's mouthpiece went flying to the delight of the fans and Samuel's teammates.

That set up San Francisco's third of four straight drives that ended in a touchdown.

Samuel's physicality has been a big part of San Francisco's success this season as he has thrived creating yards after contact as a receiver and running the ball out of the backfield.

“This is the kind of game that I always played,” he said. "To see my team round up together, it does give me a little comforted boost and a little energy. Then you just go out there and try to do it again all game, because, not too many defensive backs want to be a part of that.”

Pass rush. The Niners repeatedly put pressure on Matt Ryan, making it difficult for him to get into a rhythm. Bosa had a strip sack that gave him 15 sacks on the season, including at least one in six straight games. Arden Key had his fifth of the season and has at least a half-sack in six of the past seven games. Samson Ebukam also had a sack and the Niners finished the game with 10 quarterback hits.

Coverage units. Mitch Wishnowsky struggled to get his kickoffs deep and the Niners paid the price in field position. Atlanta started three drives after kickoffs outside the 30-yard line with the average drive after kickoffs starting at the 37.9. It's been a recurring problem as Wishnowsky has the third-lowest touchback rate in the league (36.5% percent) and Niners opponents have the best starting field position after kickoffs at the 27.6.

Jeff Wilson Jr. The Niners running back is hitting his form late in the season after being sidelined the first two months by a freak knee injury in the offseason. After running for 56 yards last week, Wilson ran 21 times for 110 yards and a touchdown against the Falcons. It was Wilson's third career 100-yard game.

“Today was one of those days where I felt like myself,” Wilson said after the game. “I felt like the old Jeff, before all the stuff happened. It was a good day and I felt very good."

JaMycal Hasty. The game got off to a rough start when Hasty fumbled on the kickoff return to give Atlanta the ball at the 12. Hasty then fumbled the kick on his next try, forcing the Niners to start at their 9.

S Talanoa Hufanga (knee) left in the first half and didn’t return. ... The Niners are hoping to get RB Elijah Mitchell (knee), LB Dre Greenlaw (groin) and LB Azeez Al-Shaair (elbow) back but it could be tough on a short week.

3. The Niners forced turnovers on downs on three Atlanta drives inside the 10. According to the Elias Sports Bureau, this was the first time in the past 40 years that a team forced the opponent to turn the ball over on downs within the 10 three or more times in a game.

The 49ers travel on a short week to face Tennessee on Thursday night.