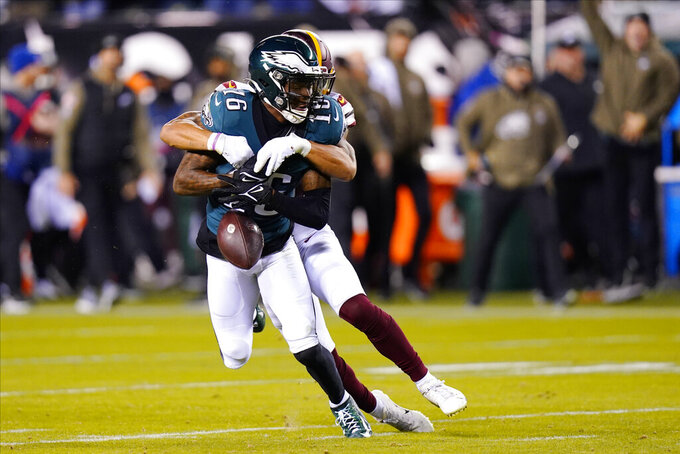 Philadelphia Eagles wide receiver Quez Watkins (16) fumbles the ball as he is tackled by Washington Commanders cornerback Benjamin St-Juste during the second half of an NFL football game, Monday, Nov. 14, 2022, in Philadelphia. (AP Photo/Chris Szagola)

PHILADELPHIA (AP) — The Eagles — like all but one team in NFL history — were not going to finish the season undefeated.

That much was inevitable.

Losses happen, even to teams with an MVP candidate such as Jalen Hurts.

The Eagles played more like a bad team in the first preseason game than one stamped with bona fide Super Bowl expectations in a 32-21 loss Monday night to the Washington Commanders.

Fumbles, an interception, another disaster on special teams, no pass rush, no pass coverage, it was as if the Eagles stuffed a season’s worth of foul-ups, mental miscues and blunders into one game.

Hey, they’re still 8-1 and still lead the NFC East. The cause for concern? The 8-1 mark now only ties them for the best record in the NFC with Minnesota (though the Birds have the head-to-head edge ).

The Eagles now head to Indianapolis (4-5-1) and get a shot to prove the undisciplined performance was either a one-game aberration or a worrying sign there are significant cracks in a championship foundation.

There was plenty of blame to go around, and yes, that includes at an officiating crew that egregiously missed a late facemask penalty that could have allowed the Eagles one more shot at a comeback.

Some of the critical errors:

— A.J. Brown is the Eagles best wide receiver since Terrell Owens and his ability to catch the 50-50 balls is a pivotal reason he’s one of the best in the game. With the Eagles up 14-10, Hurts hit Brown in stride, but the wide receiver let the ball slip through his hands and the pass was intercepted. The Commanders then went on a 16-play, 86-yard drive that lasted 7:04 for the go-ahead score.

— WR ball security was a theme. With the Eagles down 26-21 in the fourth, Hurts again went deep and connected with Quez Watkins for a 50-yard gain that would have put the Eagles deep in Washington territory. Watkins hit the ground on the catch and decided to get up and keep running. The extra effort was somewhat admirable until he was tackled from behind and lost the ball. Again, the Commanders recovered.

— TE Dallas Goedert was tackled early in the fourth on a facemask that not only jarred the ball loose — one of a season-worst four turnovers — and led to a Commanders field goal, Goedert appeared to suffer a shoulder injury on the play.

Hurts was hesitant to blame the ref on the missed call that helped decide the game.

Hurts might not have had a great game, but two passing touchdowns and another rushing score marked his fourth game this season and ninth of his career with at least three total TDs.

Just about every aspect of the game. Yes, the turnovers were disastrous, but the loss went deeper than that.

The Eagles again were unable to pressure the quarterback. Josh Sweat had a nice strip-sack of Taylor Heinicke early in the game but that was about it. The Eagles have allowed 144 yards rushing to the Steelers, 168 to the Texans and 152 to the Commanders in each of the past three games. Counting Sweat’s sack, the Eagles have only three over the past five games.

Javon Hargrave had a combined 13 tackles and a sack for a defense that spent more than 40 minutes on the field on Monday night.

Reed Blankenship’s roughing the kicker penalty was another black eye for special teams, the only unit that has struggled all season. Six-time Pro Bowl defensive tackle Fletcher Cox looks to be on the back end of his career at 31 years old. Brandon Graham, another veteran defensive lineman, hit Heinicke when he was down with less than two minutes in the game and essentially sealed the win for Washington.

Goedert appeared to suffer a shoulder injury on a play where he fumbled after he was tackled by his facemask.

Losing one of the top tight ends in the league for any length of time could be a critical blow for the Eagles.

It’s time to rebound for the first time this season with a game Sunday against Saturday — the Eagles play in Indianapolis and face Colts rookie head coach Jeff Saturday.