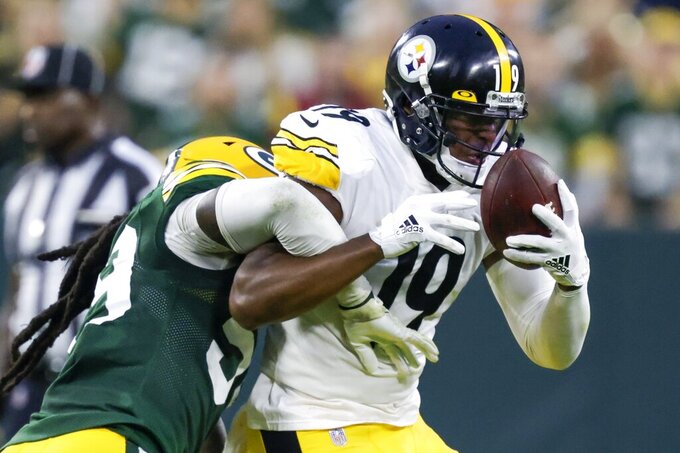 GREEN BAY, Wis. (AP) — The Pittsburgh Steelers finally found the end zone in the first quarter but couldn’t get back there until the game was out of reach.

Pittsburgh failed to capitalize on its quick start and fell 27-17 to the Green Bay Packers on Sunday for its third consecutive loss. Since opening the 2020 season with 11 straight victories, the Steelers have dropped eight of their last 10 games.

“We have had some down years, (but) it’s probably never started like this,” quarterback Ben Roethlisberger said. “What a challenge for us. I think this is going to test us all, that we need to look in the mirror and we need to figure out what path we want to take, and I know what I’m going to do.”

The Steelers (1-3) began the season with a surprising 23-16 victory at Buffalo, which hasn’t lost since. But the Steelers couldn’t build on that momentum thanks largely to a sluggish offense.

Pittsburgh hasn’t exceeded 17 points in any of its last three games.

“We won’t blink,” coach Mike Tomlin said. “We just need to continue to get better.”

Early on, the Steelers looked like they had resolved some of their issues.

Roethlisberger went 4 of 4 for 59 yards on the game’s opening series and capped the drive with a 45-yard touchdown pass to Diontae Johnson down the right sideline. That ended a string of 11 straight games in which Pittsburgh’s offense failed to score any first-quarter points.

The long strike to Johnson also was the 400th of Roethlisberger’s career, making him just the eighth player to reach that milestone.

But the offense never really got going again.

“We don’t want to go around pointing fingers or blaming,” said JuJu Smith-Schuster, who caught two passes for 11 yards. “I think for us is like, we’re in the trenches and there’s no need for all that. I think what we’re doing right now is that we’re going to go back, look at the film, look at the tape. We’re going to look over it and just learn from it. That’s all we can do.”

The Steelers didn’t get another touchdown until rookie Najee Harris scored from 1 yard out with 4:04 left in the game.

After that strong opening series, the 39-year-old Roethlisberger — who has rarely looked to throw deep this season — was 22 of 36 for 173 yards with an interception. Kingsley Keke sacked Roethlisberger and forced a fumble that Kenny Clark recovered at Pittsburgh’s 23-yard line early in the second quarter, setting up the touchdown that put Green Bay ahead for good.

The Steelers got a tough break late in the second quarter that could have turned the momentum in their favor.

Green Bay led 14-10 in the closing seconds of the first half when Pittsburgh’s Minkah Fitzpatrick blocked Mason Crosby’s 31-yard field-goal attempt and returned it 75 yards for an apparent go-ahead touchdown. The play was nullified when officials ruled Joe Haden had jumped offside.

Pittsburgh needed that kind of game-changing play on special teams because its offense isn’t delivering.

After the Packers built a 27-10 lead, the Steelers reached Green Bay territory but failed to score on three straight second-half drives. Twice they lost the ball on downs. The other time, they opted to punt after a false-start penalty had them facing fourth-and-9.

The Steelers are unlikely to escape the cellar in the tough AFC North until their offense starts producing the way it has in the past.

“I’m going to come out tomorrow and give it everything that I have and do the same thing this week and get ready to go,” Roethlisberger said. “I just hope and pray that everyone else in that locker room does the same thing, because I think potentially it can be easy to quit in a situation like this, and I don’t think we have that in this locker room.”