After injuries Penny's goal is being available for Seahawks 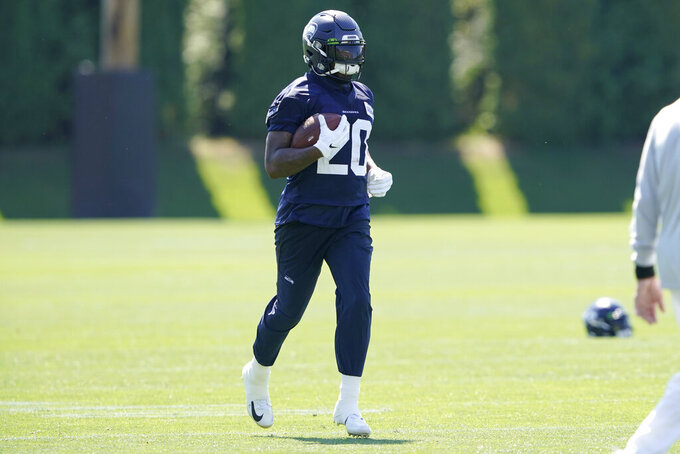 RENTON, Wash. (AP) — Rashaad Penny joked Thursday that when he works out in the offseason, he’s not interested in putting himself through the kind of strain as his Seattle Seahawks teammate Chris Carson.

“I don’t try to look like Chris Carson, do his workouts,” Penny joked. “I definitely try to do what I can do and get to where I need to be.”

Where Penny wants to be, and expects to be, is back on the field this season, fully healthy as the second piece of Seattle’s backfield stable of running backs.

After a career that to this point has seemed to be defined by injuries, Penny appears ready to go. He’s slimmer having focused his offseason workouts to drop some weight. He believes there is a role for him to thrive in Seattle’s revamped offense under new offensive coordinator Shane Waldron.

And he understands the magnitude of the season with his rookie contract set to expire at the end of the year.

“I take it every year like always do. I mean, I’ve never focused on any of that,” Penny said. “I’m just happy to be available. Just my consistency alone that’s all I got to do to put it together. I mean, those are two biggest areas I’m worried about.”

Penny has shown flashes throughout the first three seasons of his career after being a first-round pick of the Seahawks in 2018. Those flashes have been fleeting, largely because of injuries and why his future with Seattle is littered with so much doubt.

There was the broken finger during training camp of his rookie year that seemed to set the tone. His second season showed moments of potential before he suffered a major knee injury late in the season against the Rams. The recovery from the torn ACL took most of last season with Penny finally returning in Week 15 against Washington and seeing only a smattering of carries over the final three games.

Penny also underwent a cleanup procedure on his knee this past offseason that kept him out of offseason workouts. But Penny said he could have pushed and participated, but the Seahawks medical staff wanted him to wait for training camp.

Penny is tired of having his career defined by his unavailability.

“When you go through a big injury, year-long injury you start doing a lot of self-reflecting so that’s what kind of I did,” Penny said. “I told myself I need to change my body type. I needed to be more of student of the game because I knew I wasn’t going to be as available as I thought I was. I thought last year was a big learning curve for me.”

Penny hopes the tweaks to the offense will allow him to be showcased more. The Seahawks committed to Carson for two years during the offseason to be the workhorse in the backfield. But Carson’s punishing running style and Seattle’s desire for balance makes a two-back system possible, if not needed.

Penny said the new run scheme is similar to what he ran in college at San Diego State when he ran for 2,248 yards and 23 touchdowns as a senior.

“The running back spot with Penny coming back is a really exciting place,” Seattle coach Pete Carroll said. “Rashaad came back at 225. He looks great. He worked out here all throughout the offseason, and it really paid off. Best he’s looked since we’ve seen him.”