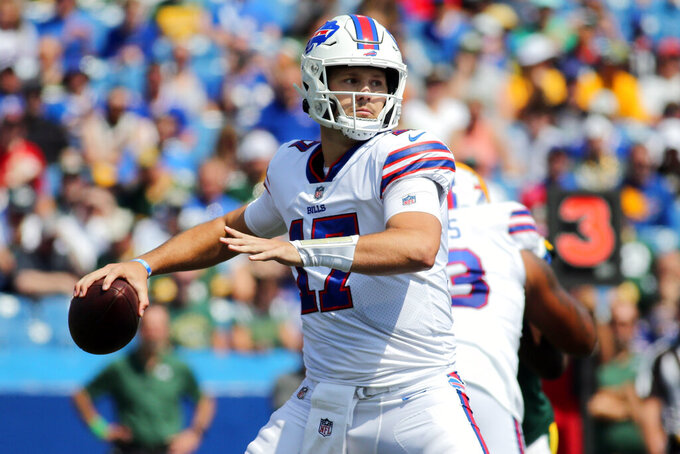 FILE - In this Saturday, Aug. 28, 2021, file photo, Buffalo Bills quarterback Josh Allen throws a pass during a preseason NFL football game in Orchard Park, N.Y. In describing Steelers quarterback Ben Roethlisberger's rugged ability to extend plays and make unorthodox throws, Bills starter Josh Allen could have been describing himself. The two open the season facing off against each other on Sunday, when Buffalo hosts Pittsburgh in a matchup of two defending division champs. (AP Photo/Jeffrey T. Barnes, File)

“Watching his game back in the day, the play was never over with him,” Allen recalled this week as Buffalo prepares to open its season hosting Big Ben and the Steelers on Sunday.

“He’s able to find ways to escape and get the ball out in some funky ways," the Bills quarterback added. "He’s never had a play given up on him, and he’s never given up on a play.”

Allen won’t dispute how his description of Roethlisberger compares to his own strong-armed and mobile attributes, which he displayed in his only preseason appearance by bursting out of the pocket and throwing across his body to hit Cole Beasley against Green Bay.

“I think it’s more than I ever realized as a kid. ... I see the comparisons of where we’re at physically,” he said. “But that’s a Hall of Fame quarterback. And I've got some time to go before we get into that conversation.”

For everything Allen accomplished last year in setting numerous single-season franchise passing and scoring records, he faces the challenge of maintaining his production entering his fourth season.

At 39, Roethlisberger is a two-time Super Bowl champion with a long-established reputation of success, reflected in the Steelers' run of stability. Pittsburgh’s never experienced a losing season during his 17 seasons behind center.

Mike Tomlin noted as much when asked how he has benefited from having just one quarterback during his 15 seasons as Steelers coach.

“I don’t know the alternative, to be honest with you. Obviously, continuity is an asset,” Tomlin said.

“But it’s very similar to the traction (Bills coach Sean) McDermott and Josh Allen are gaining up there,” he added. “Every day spent together facing the challenges that this game provides us all, I think there’s collective growth in that. There’s cohesion in that.”

While set at quarterback, Pittsburgh unveils a new-look offense under coordinator Matt Canada, who replaced Randy Fichtner. The Steelers retooled their offensive line, and sought to upgrade the NFL worst-ranked running attack by drafting Alabama’s Najee Harris in the first round.

In Buffalo, the NFL’s second-best scoring offense returns 10 starters with the exception of veteran receiver — and former Steeler — Emmanuel Sanders brought in to replace John Brown.

Beasley spoke to how the continuity on offense instills confidence.

“We come out there with the mentality that nobody’s going to stop us, and we’re going to score,” Beasley said.

“I think that confidence built some last year, and even the year before that, but more so this year,” he added. We don’t hope it’ll happen. We expect it to. But it’s easier said than done. It’s easy to do in practice. You’ve got to carry it over to the game.”

The Bills and Steelers meet for a third consecutive season, with Buffalo having won the past two meetings to end a six-game skid dating to 2001. Roethlisberger threw two interceptions in a 26-15 loss at Buffalo last season.

Minus cornerback Joe Haden, who was sidelined by a concussion, the Steelers were burned by receiver Stefon Diggs, who had 10 catches for 130 yards and a touchdown.

The Steelers intended to move Cam Sutton from nickelback to the outside after re-signing him this offseason.

Then they couldn’t find anyone capable of replacing him in the slot, leading the team to give up on the project entirely. Pittsburgh traded for rangy cornerback Ahkello Witherspoon, who figures to get some playing time on the outside along with Haden and James Pierre.

Tomlin is focused on his players, not Buffalo's.

“I’m less concerned about the people that we play from that perspective, and I’m more concerned about our quality of play, our preparedness, our cohesion, our communication,” he said.

Buffalo players took issue with Steelers receiver JuJu Smith-Schuster posting a video on social media of him dancing on the Bills logo at midfield before the game last year.

“Obviously, I remember, but I’m not going to get into that,” Bills safety Jordan Poyer said.

“That’s old news,” Tomlin said, when asked if he has addressed the matter with Smith-Schuster since. “We’ve moved beyond that.”

Diggs is looking forward to enjoying a full house in Orchard Park, after fans weren't allowed to attend regular season games last year, and only 6,600 were let in for the playoffs.

“I think it’s going to be crazy, it’s going to be loud,” Diggs said. "That’s what people have been talking about all week. ‘You haven’t had a game with the fans.’ I was like, ‘No, I have, but I’m gonna actually just focus because listen, obviously I can’t do both.’”