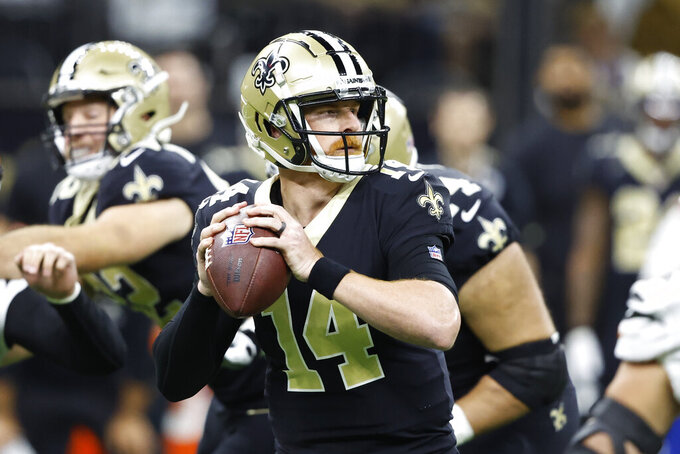 New Orleans Saints quarterback Andy Dalton (14) looks to pass against the Cincinnati Bengals during the first half of an NFL football game in New Orleans, Sunday, Oct. 16, 2022. (AP Photo/Butch Dill)

Injuries have piled up at key spots and winnable games have slipped away.

Starting quarterback Jameis Winston has a back injury that hampered him for two games before he gave way to backup Andy Dalton in Week 4. Top receiver Michael Thomas (foot) has missed the past three games. Cornerback Marshon Lattimore (abdomen) went out in Week 5, as did 11th overall draft pick Chris Olave (concussion), who'd been New Orleans' most productive receiver in Thomas' absence.

"Unfortunately, we’ve got a lot of really good players that are on the injury report,” Allen said.

Still, Allen thought he and his staff had done just about everything right on Sunday against the Bengals. The Saints were missing their top three receivers, but rushed for 228 yards and never trailed during the first 58 minutes.

“Offensively, we had a really good game plan. I thought we were effective,” Allen said Monday after reviewing video of New Orleans' 30-26 loss to Cincinnati. “I feel like a there was probably a couple opportunities that we missed and I wish we’d have been better in the red zone.”

The Saints were unable to reach the end zone on four of their five drives inside the Cincinnati 20. They couldn't get one first down when they got the ball with 3:45 left and a 26-24 lead. Just two might have been enough to run out the clock.

The good news for the Saints (2-4) is they've been competitive. Three of their losses have been by eight or fewer points — none by more than 10.

And no team is running away with the NFC South, where 3-3 leads the division.

“We’re sitting here one game out in our division, so it’s not a time for panic,” Allen said. “The message is: Just keep grinding, keep working because we’re giving ourselves opportunities. ... We’ve just got to make one ore two more plays to push us over the hump.”

The running game has averaged better than 230 yards during the past two games, with 235 against Seattle in Week 5.

Defensively, the Saints have struggled to produce turnovers. Since Week 2, New Orleans has two fumble recoveries on non-special teams plays, and it has only one interception all season.

“It’s not what we would expect,” Allen said. “We’ve made that point, that we've got to be able to take ball away more often and we haven’t been able to do that yet. So, we’re working on it.”

Allen added that more pressure up front could force the kind of rushed, inaccurate throws that are more likely to be intercepted.

Wil Lutz has made seven of his past eight field-goal attempts, including one from 60 yards, and his only miss in the past three games hit two posts from 61 yards out.

And rookie receiver Rashid Shaheed, who was undrafted out of Weber State, showcased exceptional speed when he scored a 44-yard touchdown on a jet sweep in his debut.

Allen indicated that Shaheed, called up last week from the practice squad, could stick on the active roster. Shaheed is returning kicks now that Deonte Harty is on injured reserve.

Dalton had his least efficient game in his three starts. It didn't help that the Saints' top three receivers were out. But Dalton was unable to convert in the clutch despite the Bengals' defense being forced to respect New Orleans' formidable run threat. Dalton completed 17 of 32 attempts for his lowest completion rate (53.1%) this season and lowest yardage total (162). The offense struggled in the red zone and couldn't sustain any threatening drives in the final 10 minutes.

That doesn't mean Dalton won't get a fourth straight start.

Allen said Winston is still “not 100%” healthy and noted that the Saints have averaged 30 points per game in Dalton's three starts.

“Andy’s done a god job when he’s been in there. We’ve produced and scored some points,” Allen said. "Let’s get Jameis fully healthy and go from there.”

Tight end Adam Trautman injured his ankle and it's not clear if he'll be ready to return this week. The Saints are also monitoring the recoveries of Thomas and receiver Jarvis Landry (ankle), as well as top cornerback Marshon Lattimore (abdomen). Olave could return this week if he passes an exam by an independent neurologist, Allen said.

3.5 points — The average margin of New Orleans' past two losses.

The Saints have a few days to prepare for a Thursday night visit to Arizona. Both teams will be desperate to win after each fell two games below .500 on Sunday.