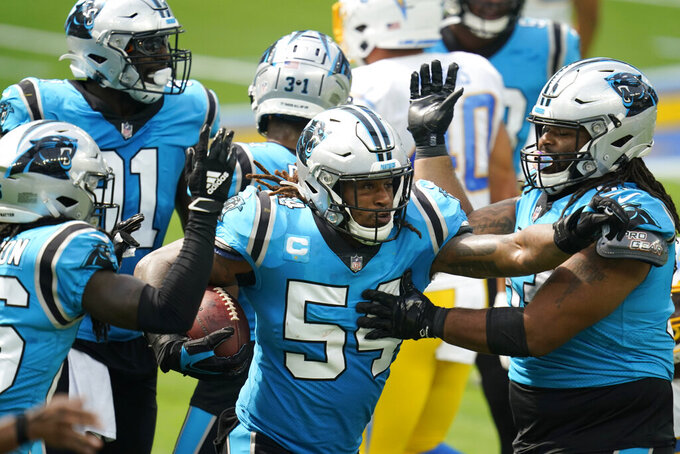 Carolina Panthers outside linebacker Shaq Thompson (54) celebrates after recovering a fumble against the Los Angeles Chargers during the first half of an NFL football game Sunday, Sept. 27, 2020, in Inglewood, Calif. (AP Photo/Alex Gallardo)

CHARLOTTE, N.C. (AP) — After an 0-2 start, quarterback Teddy Bridgewater began to wonder of his Carolina Panthers teammates: “Do we really know each other?”

After a strange COVID-19-shortened offseason Bridgewater felt it was past due for the Panthers to form a closer bond since more than half of the roster included new players.

So, on the advice of cornerback Rasul Douglas, the Panthers called a team meeting last week where players stood up individually and told a little about themselves and the journey they’d taken to get to where they are now.

It seemed to work, as the Panthers played with more energy and earned their first win Sunday under new coach Matt Rhule 21-16 over the Los Angeles Chargers, ending a 10-game losing streak.

“It transitioned to the football field,” Bridgewater said. “So, instead of guys being in the huddle with guys they barely know, you take time to get to know each other and now you understand a person’s why. When you go out there now, all of the guys on the field understand each other’s purpose and their why, and it just makes playing together that much more of a good feeling.”

Panthers rookie safety Jeremy Chinn noticed a different feeling on the field, saying guys were playing for each other.

“It is so much easier, going out on the field and risking your body and everything for guys that you actually know and guys that you have a relationship with,” Chinn said. “So taking that step this week, it was big for our team. ... We are in here as a team and as a brotherhood.

"It was definitely a big step moving forward for us.”

Carolina's pass rush was essentially non-existent in the first two games, but came alive against the Chargers. The Panthers had no sacks and only six QB pressures the first two weeks of the season while allowing 65 points. On Sunday, the Panthers brought more pass rushers and had two sacks and pressured Justin Herbert 16 times. Carolina forced four takeaways and held the Chargers to 16 points. “We’re getting better,” Rhule said. “It’s Week 3 of figuring out exactly who we are and how we do things. I thought guys took that to heart."

“We are putting a little bit more in each week and we were able to get there with some pressures,” added Rhule.

Carolina's red zone offense struggled Sunday, settling for field goals on five of six trips inside the Chargers 20. The Panthers were clearly missing All-Pro running back Christian McCaffrey, who had scored four touchdowns in the previous two games. Carolina has now scored TDs on just 38.4% of its trips in the red zone, the third-worst rate in the NFL. Bridgewater said the Panthers need to spend more time in practice working on red zone plays. “We have to have that mindset that everything happens faster, whether it’s running routes, me making decisions, being able to run the ball down there also,” Bridgewater said.

Fill-in starter Mike Davis had a solid debut for the Panthers in place of McCaffrey, rushing for 46 yards on 13 carries and catching eight passes for 45 yards and a touchdown. Davis clearly isn't as gifted as McCaffrey, but he has solid skills and runs with a low center of gravity.

With Russell Okung sidelined with a groin injury, the Panthers turned to a platoon approach at left tackle with Greg Little and Trent Scott rotating in and out. That didn't particularly bode well as all three struggled at times in pass protection against Joey Bosa. Okung wound up on the injury report last week with a groin problem — an issue that plagued him last season with the Chargers — and is considered week to week.

The Panthers won Sunday despite being without their best offensive player (McCaffrey), offensive lineman (Okung) and defensive lineman (Kawann Short). McCaffrey is likely out at least another three weeks. Short missed his second straight game with a foot problem and his return is unclear.

15 — Consecutive made field goals by second-year kicker Joey Slye after going 5 for 5 against the Chargers. He has made all nine field goals this season. The big problem for Slye has been extra points. He's missed two this season, including one on Sunday.

The Panthers now must prove they can carry the momentum of their win into the next game against Kyler Murray and the Cardinals. Defensive coordinator Phil Snow is expanding his playbook each week and his young defense seems to be improving.