With another losing record, Falcons can start looking ahead 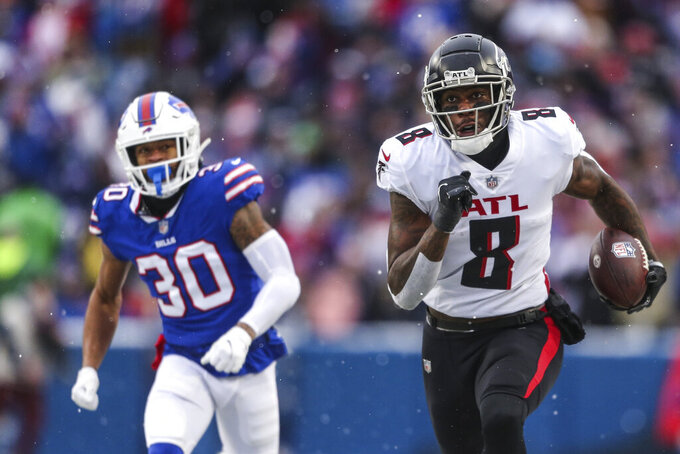 ATLANTA (AP) — Even with one game remaining in the regular season, the Atlanta Falcons can start thinking about the offseason.

The Falcons are assured of missing the playoffs for the fourth consecutive year. They've also confirmed their fourth straight losing season.

Even by Atlanta's inglorious standards, four in a row is noteworthy. The Falcons had not suffered such a long string of losing records since 10 consecutive losing seasons from 1981-90.

The Falcons fell to 7-9 and were eliminated from playoff contention with Sunday's 29-15 loss at Buffalo.

But even while losing hope for the playoffs and a winning season, the Falcons showed there is more reason for optimism than one year ago, when they finished 4-12.

“I am proud of the way the guys have fought all year,” said quarterback Matt Ryan. “There’s been no letup. Guys have been resilient, guys have worked really hard. And there’s a lot that our young players on this team can learn from. ... I think it’s going to make us hard, tougher and better as we move forward.”

Under first-year coach Arthur Smith, the Falcons are 7-2 in one-possession games.

They were competitive at Buffalo, leading 15-14 at halftime. The defense is learning to force turnovers, including three interceptions against the Bills.

As has been the rule this season, there was too little protection for Ryan and too little pressure on the opposing quarterback.

Ryan also had two few weapons. The void left after rookie tight end Kyle Pitts departed with an injury in the second half provided more proof that big-play threats are needed at wide receiver and running back.

The Falcons are approaching a crucial offseason. There are many areas in need of improvement, including the pass rush, running game and offensive line. Any team that ranks last in the league in sacks and first in quarterback pressures allowed isn't winning enough battles up front.

Help is required at so many positions that first-year general manager Terry Fontenot's most difficult decision may be ranking needs for the draft and free agency.

Ryan is 36, so there will again be questions about drafting his eventual replacement. Using the team's first-round pick on protection for Ryan might be the smartest call — both for the veteran in 2022 and the future with the team's next quarterback.

Oluokun made an interception for the second consecutive week and led the defense with 13 tackles. Terrell got his third interception. Safety Duron Harmon also had a pick. Terrell added the only sack for the defense.

Ryan was sacked five times, including one on which he fumbled for Atlanta's only turnover of the game. Ryan has been sacked 37 times this season and has been pressured 87 times, the most in the league. Right tackle Kaleb McGary was at least partially responsible for giving up the strip-sack. Smith has said in recent weeks he has seen improved blocking from the line, but the Falcons must make difficult offseason decisions about the unit.

Tight end Parker Hesse was one of five COVID-19 roster elevations before the game. Hesse was needed because Hayden Hurst was placed on the reserve/COVID-19 list. When Pitts left with a hamstring injury, Hesse suddenly became especially important, and he had three catches for 31 yards, including a 17-yarder.

“I thought Parker Hesse, he played really well and he gave us everything he had down the stretch,” Ryan said. “I’m proud of him for that.”

Ryan completed only 13 of 23 passes for 197 yards. He was held without a scoring pass for the fourth time in a span of eight consecutive games in which he has passed for under 300 yards. Ryan was unable to generate many explosive plays in the passing game. A notable highlight was a 61-yard pass play to Pitts, whose only other catch was for 8 yards.

Pitts missed most of the second half with a hamstring injury. Pitts tried to play on the first series of the second half but his inability to remain on the field leaves his status uncertain for this week. Without Pitts, the Falcons did not score in the second half. Running back Qadree Ollison left with a quadriceps injury.

12 — By forcing three turnovers, the Falcons have at least one takeaway in 12 consecutive games, the longest active streak in the league. It is Atlanta's longest stretch since a 27-game streak from 2009-2011.

The Falcons close their season at home against New Orleans on Sunday looking to complete a season sweep of the Saints and erase their archrivals chances of getting into the playoffs. Ryan passed for 343 yards and two touchdowns in Atlanta's 27-25 win at New Orleans on Nov. 7.