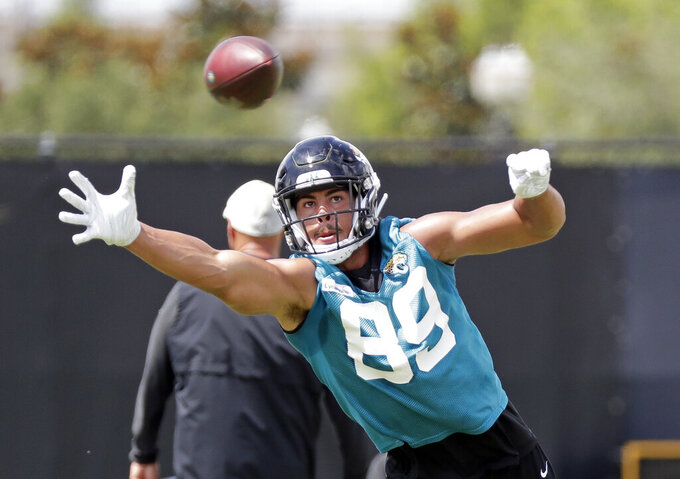 FILE - In this Friday, May 31, 2019 file photo, Jacksonville Jaguars tight end Josh Oliver (89) reaches for a pass but is unable to make the catch during an NFL football practice in Jacksonville, Fla. A person familiar with negotiations says the Jacksonville Jaguars have traded oft-injured tight end Josh Oliver, a 2019 third-round draft pick who has been limited to four games, to the Baltimore Ravens in exchange for a conditional pick in 2022. (AP Photo/John Raoux, File)

Josh Oliver never got much of a chance to show what he could do in Jacksonville. He'll get a fresh start in Baltimore.

The Jaguars traded the oft-injured tight end to the Ravens on Wednesday for a conditional draft pick in 2022, according to person familiar with negotiations. The person spoke to The Associated Press on condition of anonymity because neither side has confirmed the trade. The person said the pick will become a seventh-rounder if Oliver makes Baltimore’s 53-man roster this year.

Oliver, a 2019 third-round pick from San Jose State, was limited to four games because of injuries. Now, he gets a chance to play alongside or behind Ravens standout Mark Andrews.

Oliver showed glimpses of ability during offseason drills and training camp, but his availability was a significant issue. He missed all of last season after breaking a bone in his left foot in training camp. He played just four games as a rookie, finishing with three receptions for 15 yards. He sat out the first six games that year because of a strained hamstring and landed on injured reserve for the final six because of a back injury.

Philadelphia's Zach Ertz has been given permission to seek a trade, but it's unclear how interested Jacksonville is in the three-time Pro Bowler.

They have five of the top 65 picks in next month's draft, and a tight end is almost guaranteed to be one of them.