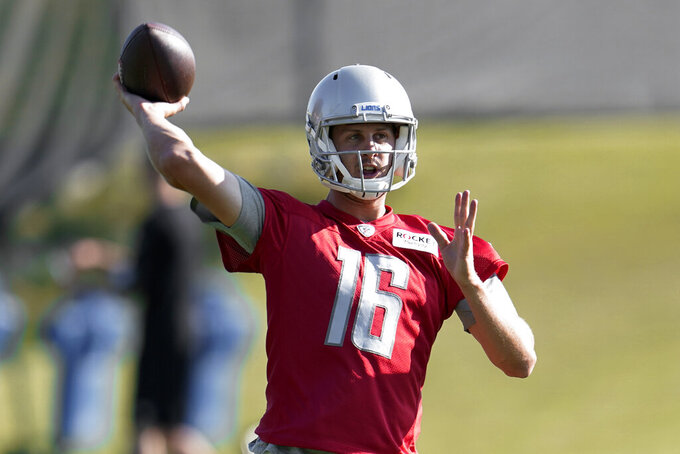 ALLEN PARK, Mich. (AP) — Detroit Lions quarterback Jared Goff is expected to play briefly in the preseason opener before Tim Boyle and David Blough get a chance to compete to be the team’s backup and perhaps seal a spot on the roster.

This offseason, the Lions made it a point to bring back Boyle and Blough on one-year deals after both shared reserve backup duties last season. It was Boyle who served as Goff’s primary backup in 2021, but this year the two have been splitting time with the second-team offense in training camp.

“I feel like they’re both better than they were in the spring,” coach Dan Campbell said this week. “And I would just say it’s still somewhat early in camp and until we get in these preseason games, I think that will tell a lot for us.”

Boyle came to Detroit in 2021 after backing up MVP quarterback Aaron Rodgers for two years with the Green Bay Packers. In his first season with the Lions, Boyle got the opportunity to start three games in relief for Goff — the first starts of his young NFL career. While he went 0-3 in those games and tossed just three touchdowns to six interceptions, Boyle said the learning experience during those games was invaluable.

“Those reps for me in games last year were critical,” Boyle said.” You don’t really know what you know until you’re in those game situations. Those three starts I had last year were incredible for my growth as a quarterback.”

Blough, on the other hand, has been with Detroit since 2019, when the Lions traded a conditional seventh-round pick to the Cleveland Browns for the former Purdue quarterback.

He has been the third-string quarterback for the Lions since his arrival but got the opportunity to start in his first year with the Lions when then-starter Matthew Stafford and backup Jeff Driskel suffered injuries. Blough, too, went winless in his five NFL starts.

While both quarterbacks will need to prove they are capable of stepping in and winning games, providing preparation assistance to Goff during game week remains an important role for the backup quarterback.

“It’s a collective effort,” Blough said. “While one guy is on the field, we’re all working together throughout the week to put the best product on the field, and I take a lot of pride in that.”

In previous years, the Lions have opted to keep three quarterbacks on the roster for the regular season. But Campbell admitted that as the rest of the roster improves, it could complicate the merits of keeping that additional quarterback on the 53-man roster.

“I think most of it comes down to what else is on our roster. That’s what it’s going to come down to,” Campbell said. “Are you keeping a quarterback three versus a stud special teams player or someone you know is going to play 30 snaps for you on defense?”

Boyle and Blough will get their first opportunity to prove it in a game setting when the Lions host the Atlanta Falcons on Friday in both teams’ preseason opener.

NOTES: Detroit first-round pick Jameson Williams has changed his jersey number from 18 to 9, matching the number formerly worn by Rams quarterback Matthew Stafford during his 12 years with the Lions. The No. 9 was vacant in 2021, Detroit’s first season since trading Stafford. Williams remains on the non-football injury list with a torn ACL, and the Lions have not offered a timeline for his return. ... Campbell admitted he did not watch Tuesday’s premiere episode of HBO’s “Hard Knocks” training camp documentary series, which features the Lions this year. Campbell did receive some texts from friends about how he looked. “My roommates in college, they were crushing me,” Campbell said.