Beating Ravens gets Chargers a date with Brady and Patriots 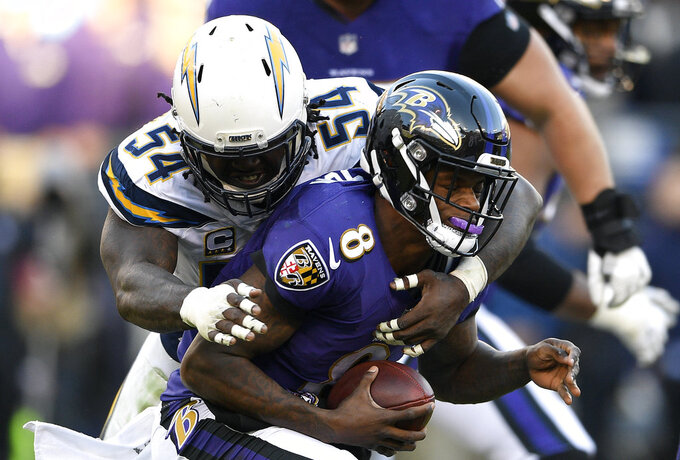 BALTIMORE (AP) — The Los Angeles Chargers' prize for dismantling the toughest defense in the NFL is a road game against a team that has long been a nemesis for Philip Rivers.

Los Angeles advanced to the divisional round of the postseason by beating the Baltimore Ravens 23-17 on Sunday. Next up, a matchup against the New England Patriots (11-5) this Sunday.

Since Rivers became a starter, the Chargers are 0-7 against Tom Brady and the Patriots, including 0-2 in playoff games. The last time they met, New England rolled to a 21-12 win in the AFC Championship game in January 2008.

Fortunately for Rivers, past performances don't necessarily mean that much. Just two weeks after being dominated by Baltimore in a loss that knocked them out of first place in the AFC West, the Chargers (13-4) bounced back with a resounding win to advance to the second round of the playoffs for the first time since 2014.

Going up against longtime Patriots quarterback Tom Brady and standout coach Bill Belichick is no easy task, but Rivers is up for the challenge.

"I'm not playing Tom by any means. But is it special to go to New England against a Hall of Fame coach and arguably the best quarterback ever to play and get another shot at 'em? Heck, yeah," Rivers said. "To get an opportunity again to go against them, 11 years after we had the opportunity in the 2007 season, yeah, it's awesome. Looking forward to it."

The Chargers face a veteran quarterback after putting the clamps on a rookie, Lamar Jackson of the Ravens, who fumbled three times, threw an interception and was sacked seven times in his playoff debut.

AFC North champion Baltimore (10-7) got to play a home playoff game for the first time since 2012, but its run ended there.

Looking ahead, this much is clear: John Harbaugh figures he'll be back as coach — even if nothing is set in stone yet — and he knows Jackson will be the team's starting quarterback next season instead of past Super Bowl MVP Joe Flacco.

While Flacco is "the best quarterback in the history of the Ravens," as Harbaugh put it, Jackson's 6-1 close to the regular season cemented the first-round draft pick and Heisman Trophy winner as the No. 1 quarterback.

"Lamar's our quarterback going forward. There's no question about that," Harbaugh said.

And as for Harbaugh's future?

"We'll see," he said. "I have every expectation and every plan to be here, as long as the Ravens want me here. And I believe they want me here. That's been made clear by them to me."

Some other things we learned from the Ravens-Chargers matchup:

STICK TO THE PLAN

It would be easy for Chargers defensive end Melvin Ingram to hog the spotlight after recording a team-leading seven tackles, two sacks, a forced fumble and a fumble recovery on Sunday.

But Ingram said his success was simply a byproduct of playing in a system that emphasizes staying in position and not over-pursuing a mobile quarterback and his hard-running backfield.

Two weeks ago, the Ravens' complicated offensive strategy wore down and puzzled the Chargers. Not this time.

"We played assignment football," Ingram said. "We were told to see what we were supposed to see. They do a lot to confuse us, but we stayed with it and it was a much better result for us."

Asked after the game if he intended to return, the 36-year-old Suggs said, "Absolutely."

The boos started in the second half, as the Ravens' offense kept getting shut down and Jackson kept getting sacked. Then came the chants from the home fans for Flacco to replace Jackson.

Baltimore cornerback Jimmy Smith was not surprised — but he was angered. So he told those spectators exactly what he thought.

"I'm standing there, and they were just like chanting Flacco's name. I love 'Flac,' but (Jackson) got us here," Smith said. "So for the fact that you're a fair-weather fan that quickly when things go rough — you turn your back on him? That just got under my skin a little bit.

Although Flacco likely won't throw another pass with the Ravens, Harbaugh clearly believes Flacco will be a starting quarterback for years to come.

"Joe Flacco is going to play really well in this league. Joe can still play," Harbaugh said. "Joe's going to have a market. A lot of teams are going to want Joe because they understand that."

Asked if he can still be a starter in the NFL, Flacco replied, "Oh, there is no doubt about it."