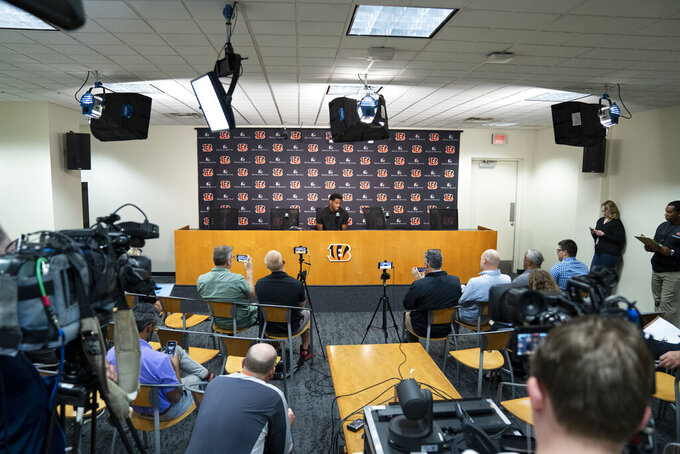 Cincinnati Bengals' Daxton Hill, back center, speaks at a news conference introducing him as the football team's first-round pick in the NFL draft Friday, April 29, 2022, in Cincinnati. (AP Photo/Jeff Dean)

The Bengals had traded up three spots to get Nebraska cornerback Cam Taylor-Britt in the second after taking safety Daxton Hill in the opening round Thursday.

Again Cincinnati addressed another one of its needs, seeking to pump up the pass rush after losing interior lineman Larry Ogunjobi to free agency. The 6-foot-4, 285-pound Carter, the 95th pick in the draft, started 12 games for the Gators in 2021, compiling 32 tackles, 11 for loss with eight sacks, and two pass breakups.

He played in every defensive alignment at various times in three years at Florida. Cincinnati defensive coordinator Lou Anarumo said Carter will start out as a traditional defensive tackle.

“I’m a versatile playmaker," Carter said. "I can line up anywhere and make plays anywhere rushing the passer and in the run game. I’m a disruptive defender.”

Earlier Thursday, the Bengals got Taylor-Britt with the 60th overall pick.

Cincinnati came into the draft hoping to address its depth at cornerback after cutting the oft-injured Trae Waynes. They had re-signed the sometimes inconsistent Eli Apple, who started last season, but want some more options for a starter next to Chidobe Awuzie.

“We see him as an outside corner to come in and compete,” coach Zac Taylor said. “We love his energy, his athleticism, his size and his speed.”

“My visit there was amazing,” the player said. "To get picked up by a team like the Bengals is surreal right now.”

The 22-year-old Taylor-Britt had 51 tackles, three for loss, broke up 11 passes and had one interception in 12 starts for the Cornhuskers in 2021. He allowed just 35 completions on 66 targets for 351 yards and three touchdowns last season.

Cincinnati, with the second-to-last pick in Thursday night's first round, grabbed Hill. While they were looking for a cornerback, the Bengals couldn't pass on Hill, whom they didn't expect would still be available that late. Taylor said he expects Hill will fit in as a safety and nickel cornerback.