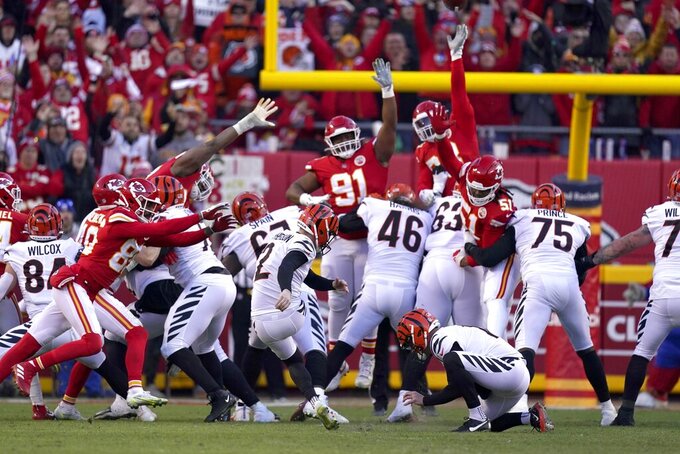 Evan McPherson kicked a 31-yard field goal with 9:22 left in overtime after Burrow kept his cool while leading a furious second-half comeback. They got the Bengals to the NFL's big game for the first time in 33 years with a 27-24 victory over the Kansas City Chiefs for the AFC championship on Sunday.

“It’s a special team that’s capable of doing special things,” said coach Zac Taylor, who was in elementary school the last time the Bengals went to the Super Bowl.

“We’ve said that from the get-go, whether people believed us or not,” he added. “We believed. So we’re not surprised.”

And who could blame them?

The Bengals erased an 18-point deficit — tying an AFC title game record for largest comeback — to take a late 24-21 lead on McPherson's 52-yarder.

“I’d say nobody blinked an eye,” the rookie kicker said of the Bengals falling behind big early. “I think we all thought we were going to come back and win the game.”

But Harrison Butker’s 44-yard kick as time expired in regulation sent it to overtime a week after his 49-yarder on the final play of regulation did the same against Buffalo.

And after the Bills' Josh Allen called tails and it came up heads for the overtime coin toss in that one — giving Patrick Mahomes and the Chiefs the ball to seal a wild 42-26 victory — Cincinnati backup quarterback Brandon Allen called heads and the coin came up tails.

The Chiefs opened overtime again with the ball, but Vonn Bell intercepted Mahomes on the third play, and Burrow and the Bengals took over.

And now they're heading to the Super Bowl for the first time since 1989 after winning their first playoff overtime game.

“Usually when you lose the coin flip to those guys, you’re going home," said Burrow, the Bengals' second-year quarterback. "Our defense really stepped up and made plays in the second half. And on offense we made plays when we had to. I thought the offensive line played really well all day. We started running the ball there at the end and that’s exciting.

The Bengals (13-7) will play the Los Angeles Rams (15-5) in the Super Bowl at the Rams' home stadium on Feb. 13. Cincinnati lost to the 49ers in both of its previous trips to the Super Bowl.

Mahomes and the Chiefs (14-6) will be left to lament blowing a chance at a third straight Super Bowl appearance.

The Chiefs had a chance at a winning touchdown in the closing seconds of regulation, but sacks by Sam Hubbard on consecutive plays forced Kansas City to settle for the tying field goal.

“We’re going to the Super Bowl," Hubbard said. “It sounds crazy to say that.”

The Bengals have won six of their last seven games against the Chiefs, including two this season. But it didn't look good for Cincinnati early in this one.

The Chiefs got a touchdown on their first three possessions, with Mahomes finding Mecole Hardman for a 3-yard score that made it 21-3 — and had this one looking very much like a rout. Mahomes joined Tom Brady (2014), Joe Flacco (2012) and Aaron Rodgers (2010) as the only players with three games with three or more TD passes in a single postseason.

But Burrow kept the Bengals in it.

He tossed a short pass to Samaje Perine, who avoided a tackle attempt by Charvarius Ward and raced into the end zone for a 41-yard touchdown with 1:05 left in the opening half.

The Chiefs appeared headed for their fourth straight touchdown drive to open the game, especially after Byron Pringle’s 10-yard catch put Kansas City at the 15 with 13 seconds left — setting off chants from the fired-up Arrowhead Stadium crowd of “13 seconds!” who were still reveling in the Chiefs' stunning comeback last week against Buffalo.

A pass interference call on Eli Apple in the end zone put the ball on the 1, but the Chiefs couldn’t get into the end zone on two tries, with Mahomes’ pass to Tyreek Hill losing a yard and ending the half. It ended up costing them.

“I was hoping we could get the ball in the end zone,” coach Andy Reid said. “I probably gave the wrong play, first of all. I could have given them something better than that. I'll take responsibility for that one.”

Cincinnati got the ball back at the Chiefs 27 moments later when B.J. Hill intercepted Mahomes’ short pass intended for Demarcus Robinson. Two plays after Joe Mixon gained 2 yards on first-and-goal from the 5, Ja'Marr Chase went up over Rashad Fenton in the end zone to catch Burrow’s toss for a touchdown. Burrow then found a wide-open Trent Taylor for the 2-point conversion to tie it at 21 with 14 seconds left in the third quarter.

The 18-point comeback by Cincinnati tied Indianapolis (vs. New England in 2006) for the largest in AFC championship history.

“I wouldn’t call it surreal, I would say it’s exciting,” Burrow said. “I think if you would have told me before the season that we’d be going to the Super Bowl, I probably would have called you crazy. Then, you know, we play the whole season and nothing surprises me now.”

Bengals: TE C.J. Uzomah twisted his left knee in the first quarter and didn’t return. He was on the sideline in the second half using crutches.

Chiefs: Backup TE Noah Gray left with an ankle injury and was ruled out in the second half.

Bengals: Head to Los Angeles to play the Rams in Cincinnati's third Super Bowl, and first since 1989.

Chiefs: Head home for the offseason.